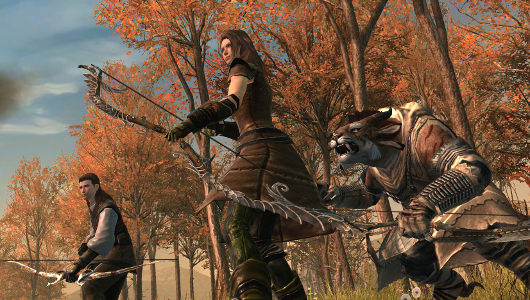 Why Do We Play MMOs?

I feel like I’m a bit of an MMO junkie. I don’t partake heavily in any one game, but I do find myself partaking in any ones I can get my hands on. With the rise of Free-to-play ones, this has become both easy and problematic. I came to this realization when I was trying out Ragnarok Online 2, the newest F2P MMO that has graced Steam. Despite being a rather simple game, I was thoroughly enjoying myself. With that naive notion in mind, I suggested this game to a few of my MMO friends. I did preface the suggestion with the aforementioned simplicity of it. They kindly checked the game out and all found it to be rather boring. I didn’t blame them. There wasn’t much depth to the game at all, but for some reason I really liked it. It was at that moment I stood back and really asked myself, “Why do I play MMOs?”

Oddly enough, I realized the one thing  I don’t play MMOs for is the community aspect. Sure, I will join a party to run a dungeon, but apart from that, I tend to run solo, thus negating the MMO portion of my enjoyment. What’s left to enjoy? Quite a bit, actually.

This one tops the list because it is incredibly rare for an MMO to have an engaging story. Most of the time you’re quickly clicking through conversation boxes to get to the next “kill x” and “gather y” quest. Fortunately one game  was able to deliver on this. Hate is as much as you want, Star Wars: The Old Republic had one hell of a story, for all 8 classes! Of course, who could expect anything less from Bioware? While they aren’t perfect in every aspect of the games they make, they do excel at telling great stories that make you care for the character you play and with those you interact. Luckily it’s now free-to-play, meaning anyone can enjoy the best part about that game.

This could be tied into story, but I felt that this deserved its own category. Even though SWTOR had a great story, its atmosphere was lacking a bit. Sure it felt like Star Wars, but the countless kill and fetch quests between your main story just ruined the atmosphere. Now, I’m not here to trash any MMOs, so I’ll just skip to a game which I enjoyed immensely because of its atmosphere, The Secret World. One of the few games set in the modern time, The Secret World unleashed all the conspiracies and horror stories that paint humanity’s incredible imagination. It’s got the Illuminati, the Templars, zombies, ghouls, blood magic, and all sorts of Lovecraftian lore. This was all tied together nicely by the unique combination of quests. Sure some were kill and fetch quests, but each one had its own encompassed story. It also mixed up the formula by introducing stealth quests, where you actively try to avoid combat and enemies. And by far one of my favorite quest types, investigation, tasks you in pulling information from our world to help solve the quests. Sure you could cheat and look up the answer, but the fun of it was figuring everything out for yourself. That truly made my feel like I was part of the secret world.

I left combat for last intentionally because again, this is rare in MMOs. Most developers tend to go the safe route with your hot bar strewn with dozens of abilities. If you aren’t a veteran to MMOs, this can be incredibly daunting. Even if you do play regularly, trying to go back to a game after months of absence is difficult. It’s not easy trying to relearn everything as a top level character, especially if abilities have been drastically changed in a patch. Fortunately, one MMO stands above the rest in combat not only through its minimalistic hot bar, but also through the sheer activeness of combat. In Guild Wars 2, you’re not tasked with just standing in one spot hitting buttons. This game rewards people who flank their opponent, roll around, and be an active participant in the battle. In fact, a decent number of abilities will automatically allow you to roll, back step, or teleport to a new location, making for some truly epic battles.

Now where does this leave Ragnarok Online 2? It doesn’t have much of a compelling story. The atmosphere is a pretty generic anime style. And the Combat is your tried and true stand in one spot and hit buttons. Doesn’t sound like I should enjoy it at all, but I do. I suppose some games are just good to waste time, even when there are more engaging games out there. Sometimes all you need is a pointless distraction to have fun, and that game certainly provides it.

Feel free to leave your own reasons why you enjoy the MMOs that you play.