I will put my hands up right now and admit that I was not exactly on the pulse of gaming when I first learned about Thomas Was Alone a few weeks ago, despite the game being almost a year old. An indie platforming title created in a basic form by one guy (Mike Bithell) over one weekend, I was oblivious to its charms until it was released for free as part of the PlayStation Plus’ Instant Game Collection in late April. The simple, but ambiguous name and rather rudimentary screenshots did not exactly scream ‘gaming gem’ at first, but after taking my book cover-judging glasses off, I was able to appreciate what others had been enjoying for a year on PC and Mac.

The game sees you take control of Thomas, a lonely red rectangle, who seems to have only just become sentient. Your goal is to traverse your current environment to the exit, a white outline with the same shape of Thomas. To aid you in this task, you quickly learn that Thomas can not only move from side to side, but he can also perform an ‘inverted fall’. After a time, you will meet Chris, a small orange square who is jealous of Thomas’ ability to jump higher than him, and John, a long yellow rectangle who can jump farther than anyone. Eventually, as the cast of characters begins to grow, Thomas begins to form friendships with the others and starts to wonder what he would do without them. 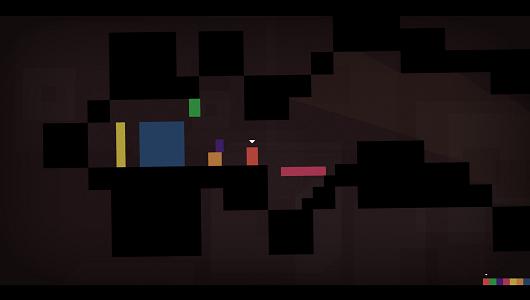 Of course, in reality, you are controlling multiple polygonal shapes and using their different abilities to solve environment-based puzzles. If the game did not include anything else, it would be a rather sterile experience and struggle to maintain your attention. However, the addition of a narrative is a stroke of genius – helped greatly by a humourous and witty chronicler (comedian Danny Wallace) detailing how each of the cast feels about themselves and the others. It wraps a solid but relatively limited puzzle game in an interesting premise, making the reward for each level a further progression in the story. 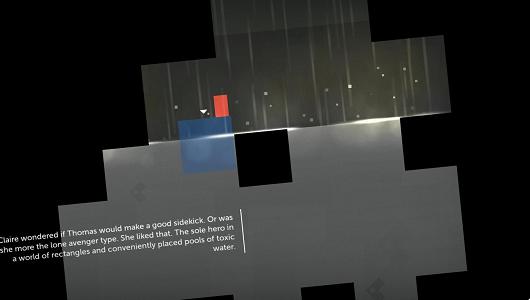 The sound design is well-utilised in expressing further characterisation. The aforementioned John makes a springing noise when he bounds across the screen but a character like Claire, a large blue square who can float but can not jump very high, makes a low thud when she tries the same movement. If a character dies, they fizzle from existence in an ominous fashion, but immediately pop back into life at the beginning of the level or at the last checkpoint. The minimalist aesthetic and understated score also help to evoke a sense of isolation which permeates the game. At one point, some of the other characters begin to disappear and the sense of loss and loneliness is palpable. 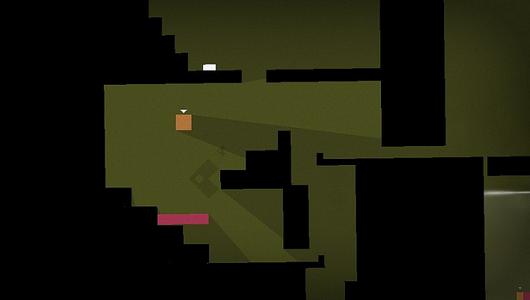 While I have not yet had the chance to play the game on PC or Mac for comparison, I would still advise anyone to get this for the Vita (if they have one) for a few reasons. Not only does it give you a game to play on the forlorn platform, but it is ideally suited to mobile play – the short levels are perfect for daily commutes or visits to the porcelain throne. The version released on Sony’s platforms also includes additional time-exclusive content with new levels and a new character that has jetpack-like abilities. The Vita’s touchscreen can also be used to select specific shapes or drag the camera into more convenient positions.

Thomas Was Alone manages to give its main characters personality and goals, despite them being little more than multi-coloured blocks. If there was ever an example needed to demonstrate exactly what good writing can do for a game, this is the title to show. The narrative elevates the game from an accomplished but basic platformer to a story-driven gem that needs to be experienced.