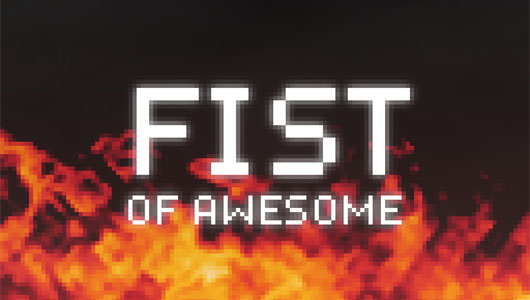 Every comic book day, I pick up the week’s paperbacks and head to Loading/MADD to read them in comfort alongside a nice drink. This week Fist of Awesome, a game which prides itself on giving the player the ability to sock a bear in the jaw, was on show.

The first thing that was said to me as my beverage was prepared was: you need to give this game a shot. So, after I’d drunk the finest of the MADD smoothies, read my comics and once the Ouya was free, I asked if I could have a go. Boy am I glad I did.

New from I Fight Bears, the same developer as Hard Lines, a game which has had it’s praises lauded in the past on BRBUK, and spawned from a game made for the developer’s girlfriend, comes Fist of Awesome. The game has already had a highly successful Kickstarter campaign late last year and is now just a few months from release.

The player is Tim Burr, a bearded lumberjack, transported through time and into different dimensions where humans should be caged and bears rule the world. Shortly into the game Tim Burr’s fist becomes sentient, announcing itself as the Fist of Awesome, and takes control of Tim’s body as he fights his way through deer, bears and other homicidal animals, trying to find his way home in this side-scrolling beat-em-up. Think Quantum Leap, if Quantum Leap revolved around Sam Beckett beating up woodland creatures. 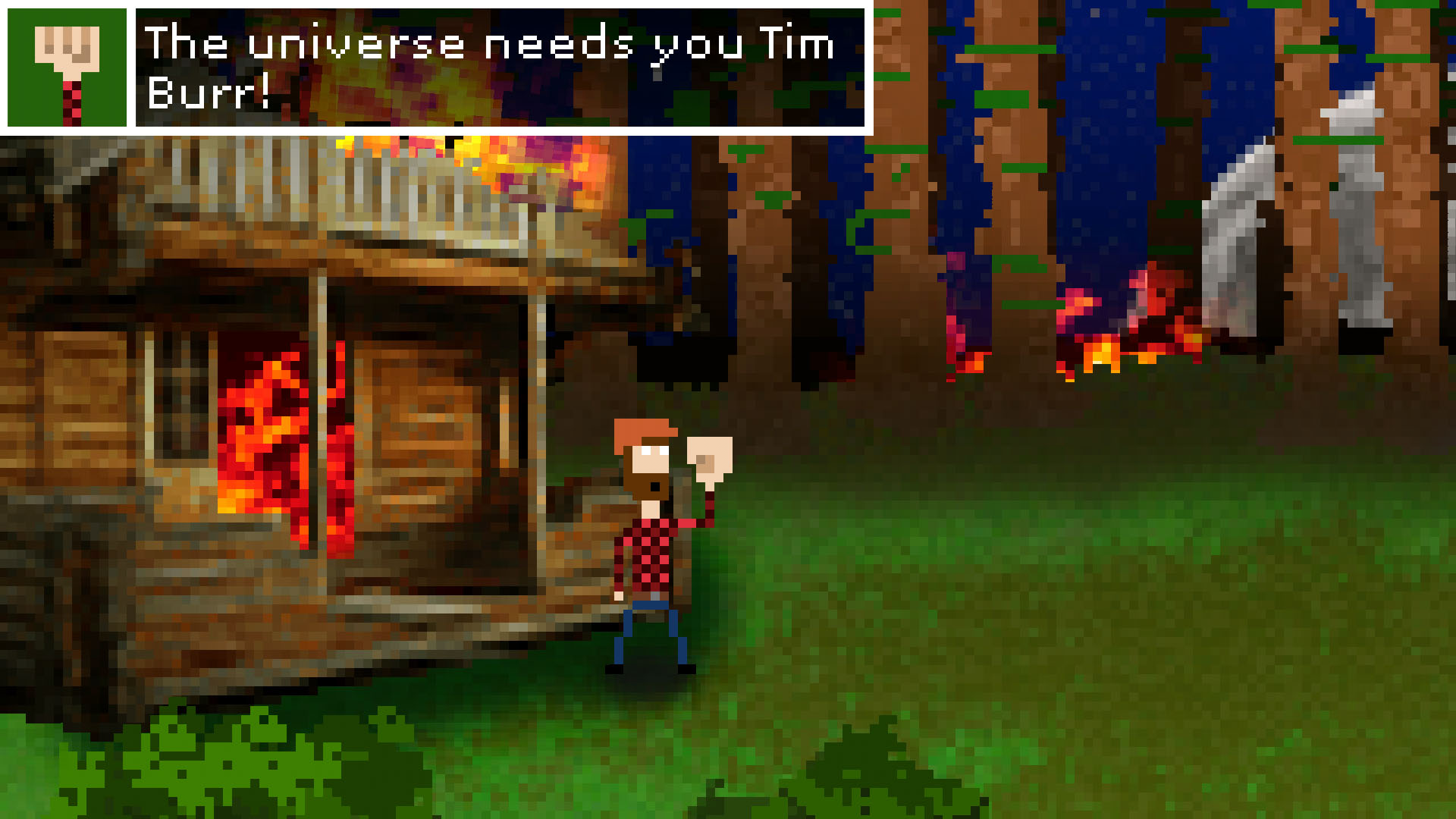 Fist of Awesome is, at it’s heart, a tale of one man and his left hand.

The art style of Fist of Awesome is a wonderfully simple, pixelated system that harks back to the games of old whilst remaining crisp and smooth. This allows the game’s humorous side to beam though, as you move through the levels you’ll come across hilarious (and informative) signage and buildings that serve as a perfect backdrop for the ridiculous fights that ensue. 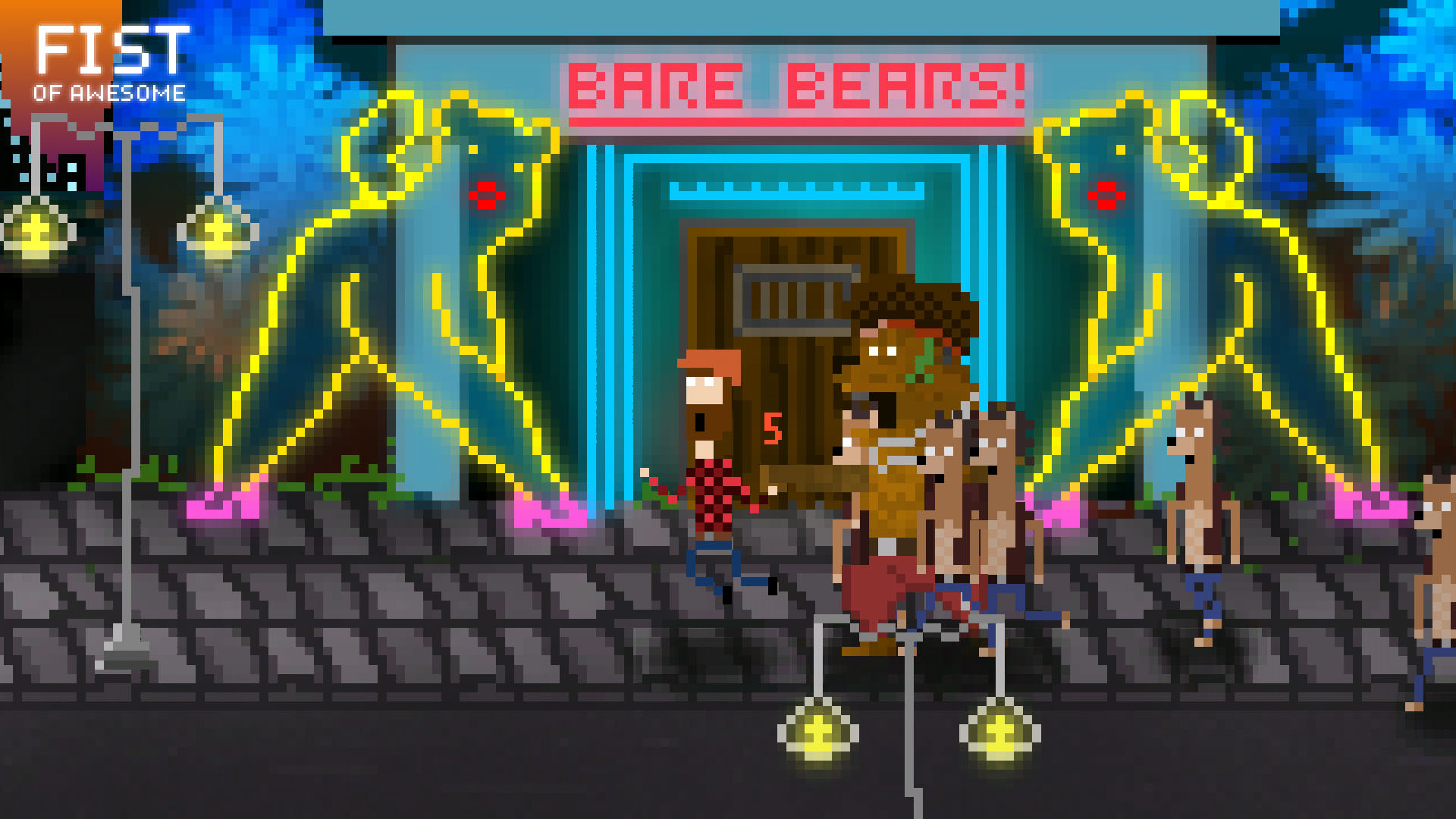 Note the detail on the signage for Bare Bears: these strippers are nude sure, but they’re wearing heels. Classy.

Unfortunately, due to the general buzz of conversation that always fills Loading and the fact I was talking to Nicoll Hunt (Head Honcho at I Fight Bears) as I was playing the game, I didn’t hear much of the soundtrack. This is a shame as it’s being put together by Echolevel (Brendan Sycliff) the chip tune artist of Pineapple Smash Crew and Gun Runner fame. From trailers for the game the soundtrack looks promising, but not having experienced it first hand, I can’t comment much at this time.

The game was available to play on both the Ouya and the iPad. Despite what I’d previously heard, I found no noticeable controller lag with the Ouya, everything was nice and fluid and you could start to build up combos fairly easily. The controls are fairly straight forward with movement on left thumbstick and the facebuttons being different attacks. I’m a sucker for retro graphics, and boy did they look pretty on a big screen.

However, it was on the iPad that the game really showed promise for me. Finding that the iPad controls for both Final Fight and Streets of Rage were too awkward, Hunt set out to create a control scheme that could work well but still feel intuitive to the player. In large he appears to have succeeded in this, there are no ugly on-screen displays getting in the way of the art work, instead the left thumb controls movement and the right thumb your actions. A tap with the right thumb is a punch, a swipe is a kick and a swipe upwards is jump, everything else builds from there, for example, a more powerful punch can be delivered by tapping and holding the screen or you can submit your foe to a flying kick by first swiping up and then in your direction of travel. 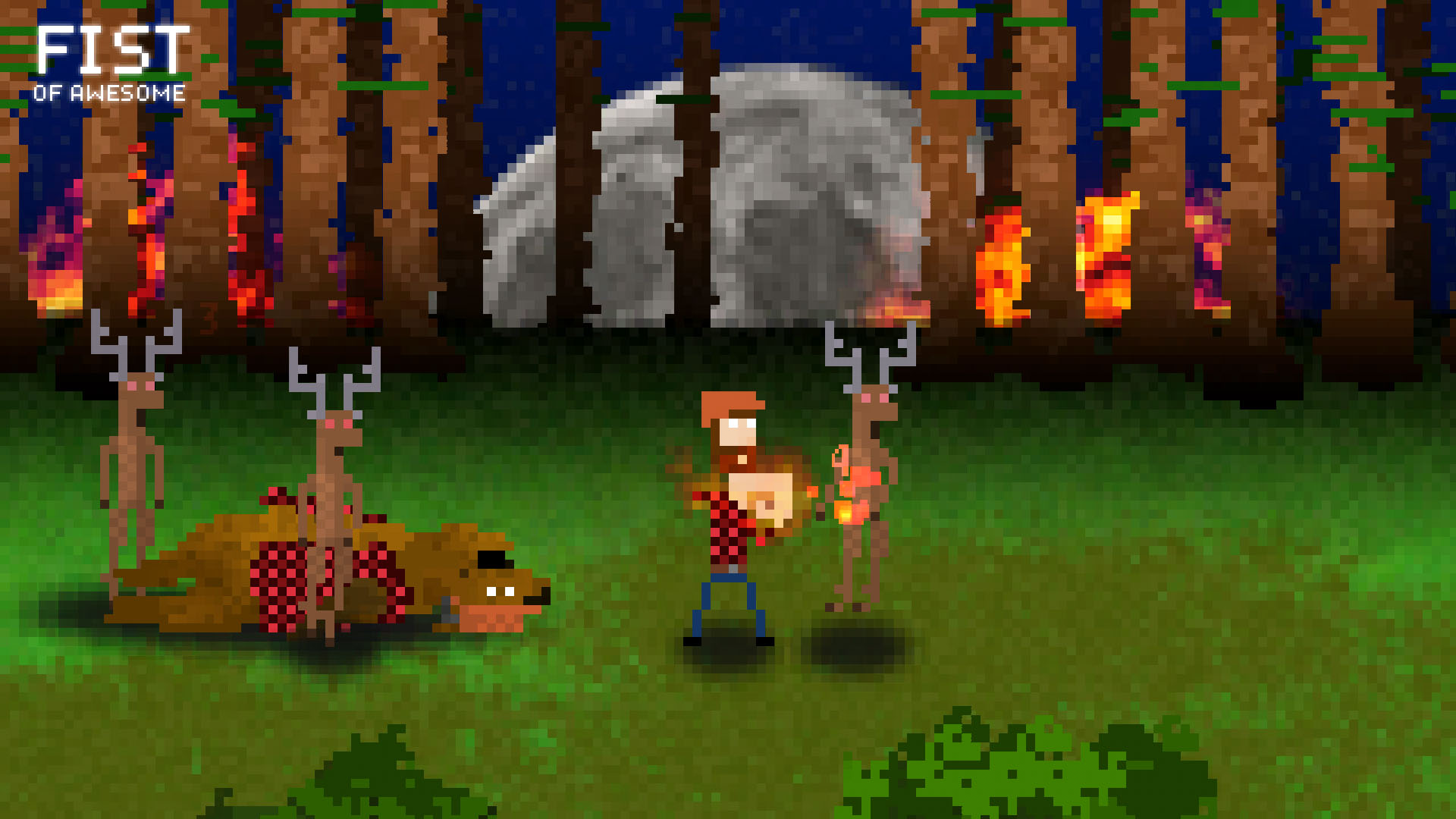 Holding down the punch button causes Tim to do a more powerful, flaming attack.

The game is still very much in it’s infancy, with only the first two levels and an incredibly difficult Bear Fight mode available to play, however what’s currently there is a fun, humourous sidescroller that’s certainly one to look out for in the coming months.