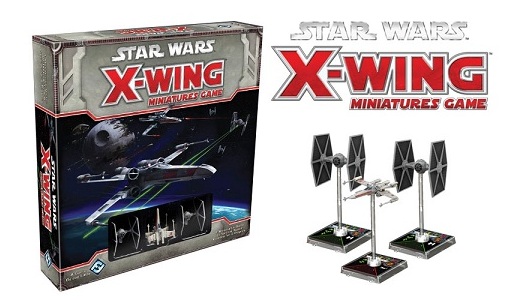 A fast-paced, fun and incredibly evocative game that brings the dogfights of Star Wars to life. If you can afford the investment.

It’s been more than fifteen years since I’ve bounced around my lounge with a toy space ship yelling “pew pew!” at visiting guests, but I would challenge anybody to come up with a better response to the situation that triggered my celebration:

My rookie A-Wing pilot had got cocky, swerving sharply to keep the TIE it had whittled down to one hit point in its sights. It thought it could avoid the asteroid it was skimming easily, but instead clipped its wing against the rock and was immediately vaporised. Now vastly outnumbered by my flatmate’s Empire forces, it was down to Red Leader to even the odds. The X-wing zipped under the TIE fighter and pulled off a painful 180 degree flip to bring it face to face with the oncoming Imperial. Too stressed to do anything other than fire, a miraculous three hits took it down before the two ships could collide.

X-Wing Miniatures is absolutely everything you could want from a Star Wars dogfighting game. The rule book is thick and the markers busy and abundant, but beneath this surface confusion is an elegantly simple game that can scale smoothly across all ability ranges and experience levels.

The essence of the game is this; players use dials to set the movement of their ships based on the movements templates provided (there is no board, only asteroid fragments that are scattered across the battle arena), these are a series of hard and fast turns as well as quick flips that cause pilot stress and simple manoeuvres that clear pilot stress. Players reveal these movements based on each pilot’s skill and any non-stressed pilots can also perform an action such as dodging, gaining a target lock or focusing. The combat phase then allows ships within range to shoot at each other, rolling a number of attack and defence dice based on the ship stats and modified by the actions mentioned previously. Successful hits knock out shields or reduce hull integrity, whilst critical hits can deal harsh penalties like reduced weapon power or pilot skill.

And that’s it. The rules are quick and intuitive, allowing players to focus on the tactics of the game without getting bogged down in numbers. The action is on the  table not the dials, and the movement templates allow players to dart in and out of each other in manoeuvres that replicate the feel of the movies. Both sides have their own traits, with the Empire being faster but more vulnerable, often outmanoeuvring the slower but substantially tougher rebel forces, and the handful of mission ideas laid out in the rules theme the battles further whilst simultaneously avoiding a slightly tedious ‘last ship standing’ endgame that objective-less skirmishes can turn into. 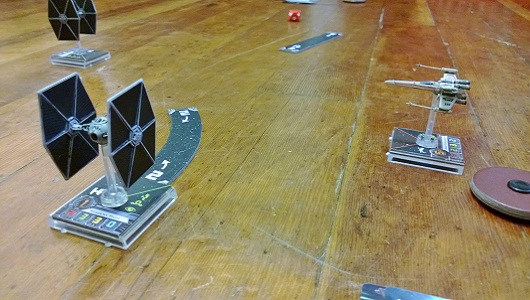 Games last about 45 minutes once you know what you’re doing and whilst the box claims it’s for two players it can easily stretch to four with each person in control of their own squadron. In fact, after playing this game a number of my opponents decided to buy their own ships immediately.

Which brings us to the crux of the matter. X-Wing miniatures is expensive. The core set contains just two TIE fighters and a single X-Wing and whilst that number of ships can hold players’ attention for a few games, it’s not until you get to something like four ships on each side that things get really interesting as players start to employ effective formations and flacking manoeuvres.

These additional ships are not cheap, but boy are they beautiful. When not being used my rebel fleet of two A-Wings and an X-Wing stands pride of place on my windowsill next to my flatmate’s TIE Advanced and escort. The build quality and detailing of these models is astonishing and the regular release of new ships (including the Millennium Falcon and Slave I) means I might as well set up a direct debit to Fantasy Flight for the foreseeable future.

To close, X-Wing is a premium game at a premium price, it gives back what you put into it and the more you invest the more fun you’re going to have. My advice is; buy the core set, play it with your friends and get them to buy a couple of models each.

Also you can’t play as Porkins, what’s up with that?