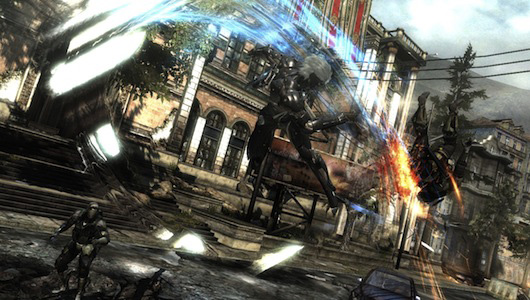 Metal Gear Rising: Revengeance is a lesson in stripped-back efficiency. Adapting Kojima Productions’ canned semi-sequel to Metal Gear Solid 4 into a form in line with Platinum Games’ previous handiwork requires compromises and cuts – pardon the pun – and to Platinum’s credit the result is an elegant, heavily streamlined and unapologetically bombastic rollercoaster that knows better than to try and outstay its welcome. It’s Metal Gear, but not as we know it.

It’s a game that means business, throwing endless chaos and swordplay at you to an endless breakbeat-lacked thrash metal soundtrack. As you go you’ll slice up robots from the Metal Gear universe, shred cyborgs to pieces and crush their artificial spinal cords in your fist and fight a well-endowed mistress wielding a staff made out of robotic forearms; and that’s just for starters.

Playing as Raiden, the sword-wielding badass cyborg, is properly silly fun, but silly fun that is so well made and whittled down to a point that it’s equally playable whether an elite fan or a total franchise outsider. The story, which revolves around Raiden taking on an evil private military company hell-bent on staring World War III, is mostly made up of winks and nods to the rest of the Metal Gear universe – especially the clumsily shoehorned philosophical soliloquies – and as such can be glazed over should one just wish to cut to the action.

The action is largely button-mash friendly, relying on light attacks with Raiden’s sword and heavier attacks with a variety of harder-hitting secondary weapons. Parrying is essential to survival, with telltale red glimmers indicating when it’s time to block and flashes of gold foreshadowing unblockable strikes. Raiden’s seemingly countless animations are a joy to behold, the entire experience one of unmitigated joy as he sweeps back and forth from soldier to soldier, dancing in the air and twirling his sword from every limb as the soundtrack lets off some ambient nukes and the body count rises. 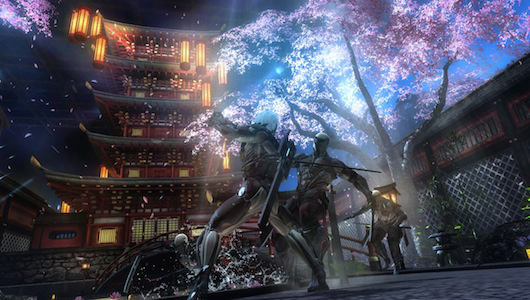 Rising‘s crowning feature is Blade Mode, in which time slows and Raiden stands still, aiming his sword on a two-dimensional plane. Using the right analog stick, you can cut freely in any direction and neither enemy soldier nor street furniture is safe from being cleaved in two, or three, or four. There’s a guilty sadistic rush to sweeping back and forth, slicing enemies into countless pieces before reaching in and plucking out their juicy bits for a significant health boost.

Despite the endless fluidity of the combat, the game occasionally stumbles over its own feet. the camera occasionally gets in the way especially if locked on to a target, so it’s best to ignore the feature altogether. The buttery smoothness is also interrupted by equipping sub-weapons such as grenades, rocket launchers and cardboard boxes, which require Raiden to come to a complete standstill before the menu can be opened, and the button combination of a rear left shoulder button and front right is clumsy: you will find yourself trying to aim an RPG and switching to Blade Mode by accident more than once in the very brief campaign.

The game’s brisk length – I completed it on Normal in less than five hours – is an asset rather than a setback. Rising‘s superb pacing ensures that boss fights are never far away and that the swordplay isn’t diluted through repetitive kill-rooms. New Game+ is almost too much to resist after a first playthrough and with dozens of customisation options, including the ability to play as Gray Fox from the original Metal Gear Solid, there’s plenty to explore even after seeing the credits roll. There’s even the potential to approach the game as a classic Metal Gear title through stealth rather than direct assault – but don’t expect much thanks from the game for going to the trouble.

Despite the occasional stumble, Rising is a fantastic phoenix of a game, rising out of the ashes of a game that almost never was with stubborn tenacity and a fistful of brilliant ideas. The execution isn’t perfect but Platinum Games have done a sterling job of producing a scrapper which takes Metal Gear into new territory without alienating a fiercely loyal fanbase – or scaring off new blood. It’s not perfect, but what is? And what else dares to be this exciting for just the right amount of time?