God of War: Ascension was announced last April as the next installment in Sony’s angry-Spartan-brawler series. Since then, we have seen trailers and gameplay footage showing off the title’s beautiful yet brutal art-style and combat mechanics. Oddly though, the majority of this hype-building has focused on the game’s newest feature – multiplayer. Normally, games known for their single-player experience that introduce a multiplayer component tend to announce it late and maintain that their concentration is on the main campaign. Does this indicate that Santa Monica Studio have put all their eggs in the multiplayer basket to the detriment of Kratos’ story? The short answer is ‘Yes’ with a ‘but…’. The long answer is, well, below.

Ascension is a prequel to the original God of War, taking place ten years before Kratos spectacularly loses his temper and points his rage at Ares. Our story begins with Kratos in chains, held at the mercy of the Furies for abandoning his oath to serve the war god. Created by the Primordials, the original creators of the Earth, these three sisters detain Kratos in the dramatically named Prison of the Damned. Like every God of War game before it, Ascension opens with a jaw-dropping set-piece, in this case, Kratos’ prison break. While this may not sound impressive, keep in mind that the Prison of the Damned is, in fact, the petrified body of the Hecatonchires, a gargantuan creature with hundreds of arms. As Kratos makes his escape, one of the sisters, Megaera, reanimates the monster in order to stop him.

Production values are high as is the norm with a God of War game. The visuals are a feast; never has a mutilated, re-animated monster appendage looked so good! The score from Tyler Bates, composer to the similarly ferocious, Spartan-filled 300 movie, is suitably epic and testosterone-filled. All of this adds up to put a nice sheen on an otherwise pedestrian experience, quite similar to the previously name-checked 300, actually. From the tired video game tropes like orb-collecting and invisible walls to the well-trodden story, the feeling that we have been here before is certainly pervasive (and the previous visits were better). 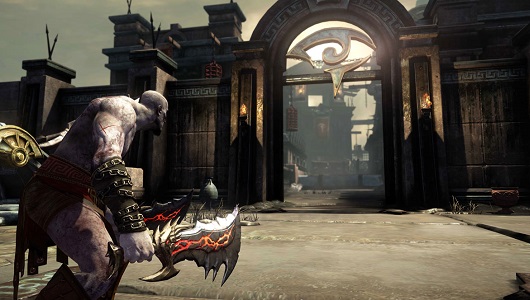 A thing of beauty… and death

It would be disingenuous to suggest there have not been improvements though. The game’s director, Todd Papy, was a designer on the previous games before taking the hot seat in Ascension. His influence can be felt most in the improved gameplay mechanics. In the previous God of War titles, your primary weapons were the Blades of Chaos (think massive knives attached to chains). As the games progressed, you got your hands on swords, gauntlets and other instruments of destruction but you always fell back on the meat cleavers. Ascension embraces this so that, instead, you receive new power-ups that grant the blade magical powers; the Fire of Ares, the Ice of Poseidon, the Lightning of Zeus, and the Soul of Hades. To add variety to proceedings, you can still acquire five ‘world weapons’, which include swords, spears, slings, clubs and (more usefully) shields. A new grapple mechanic and a revamped Rage meter further add to your combat arsenal, making it easy to rack up large combo scores by flinging enemies into each other. Even gaming’s version of gameplay marmite, quick-time events (QTEs) have been spruced up so that instead of simply mashing buttons at the right time, you also need to watch the action on-screen to see if your opponent is going to try to strike back. If so, you can use a quick analogue stick movement to evade your attacker, allowing you to continue your evisceration/decapitation/disembowelment (delete as appropriate).

However, for every new or improved feature, there is a negative element retained from the earlier games that has not been addressed. The fixed camera continues to irritate – environment-traversal and combat are made all the more difficult by it, whether it blocks out the view of where you need to go or by zooming out to facilitate the dramatic scene unfolding around you, making your on-going fight difficult to see. Doors, boxes containing orbs and other useful items are again dotted around the game world and Ascension’s designers have made the intelligent move of dispensing with the need to repeatedly hammer the action button in order to open them. It always seemed odd that a demi-god like Kratos could take down titans but couldn’t open doors without great effort. This makes it all the more perplexing that the change only applies to some of these objects, with green orb chests, for instance, still requiring you to tap the Circle button. 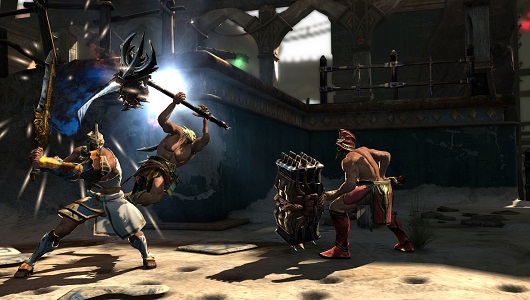 What’s going through his mind? My guess? A hammer.

The multiplayer portion of the game appears to be where Santa Monica Studio has made the most effort. Beginning as a soldier you initially meet during Kratos’ escape from the prison. You are transported to the Rotunda of Olympus and must swear your allegiance to one of Ares, Poseidon, Zeus or Hades. Each god grants you specific attribute enhancements and magical powers. The online section is split into four modes:

The improvements to Ascension’s combat system become more apparent here as fighting real opponents forces you to be precise in your movements. Button-bashing will only get you so far, but a more skilled player can use a quick attack to parry yours before grappling you and throwing you into a wall. As with all online components these days, building experience and ranks is important/ You can level up your character or your equipment and the allegiance to your choice of god also grants you further bonuses.

There are six online maps, varying from the basic arena of the Rotunda to the multi-leveled Desert of Lost Souls. Each map provides its own special feature, like Hercules deciding to join in on the action in his Forum. The levels are distinct and interesting, with additional arenas being an obvious avenue for DLC.

Fans of the God of War series, expecting to get another thrilling single-player game may be disappointed in Ascension but if they are not averse to multiplayer, Santa Monica Studio has crafted a unique and involved online component that does make up for some of the campaign’s failings. However, if you have no interest in taking on other Spartan warriors over the Interwebs, you may want to avoid Ascension (and Halo).