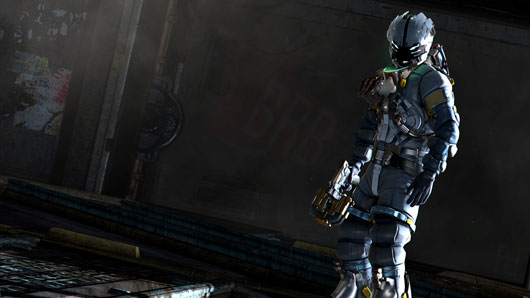 In Space, as we are told all to often, no one can hear you scream. The same can be said of my PS3, given that I have never managed to successfully pair it with either of the bluetooth headsets I purchased for the purpose. This is part of the reason that our review for Dead Space 3, will be split between my PS3 based review and Xbox 360 based review to follow. It does also mean that we have both formats reviewed, but we also thought it would be a handy way of addressing some people’s justifiable concerns that the introduction of a co-op mode to the Dead Space series would ruin the feelings of dread and fear that arise from flying solo. I am playing Isaac Clarke’s story. Alone.

Let us deal with that initial point straight away; if you want an entirely single player game from start to finish then you have no fears. The secondary character, John Carver, appears in cut scenes, but at first this is hardly more so than a number of the other NPC’s. Later in the game there are a few “Where the hell did you just come from?” or “Why the hell aren’t you helping?” moments, but I have seen similar or worse in games with no co-op at all. When playing, the only other way you would notice that co-op was included is the inclusion of a few weapon upgrades that are particularly designed for cooperative play (e.g. an upgrade that will heal your co-op partner at the same time when you use a med kit.) and there a few areas (three, that I saw) that you can only access with two players.

The weapon upgrade system has a much greater effect than co-op at making changes to the Dead Space universe. Using benches found throughout the environment you can now mix-and-match different elements from different gun and mining tool combinations. You can mix any two weapons together (provided you have the parts) and then attach them to a single frame component. You can then add a tip to each of these weapons that act as a modifier — for instance once you have selected the Military Engine you can add a tip to turn it into a shotgun, assault rifle or pistol — This can be tweaked even further using a combination of upgrade chips that can increase factors such as reload speed and damage.

The upgrade system is a lot more complicated than in previous Dead Space games. This can be annoying at first, when attempting to work out where the new part you just picked up is to be found in your inventory, but otherwise feels like a very natural addition that adds a tactical layer of choice and a fun level of interactivity. It also results in the need to pick up a lot more items, while still retaining the scarcity of resources that is a hallmark of the series. However this can be overcome with prudent resource management allowing you to craft advanced parts, ammo and health packs. 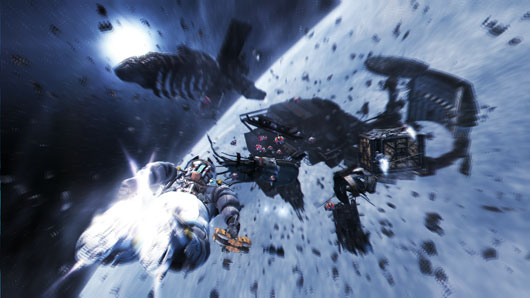 The prologue to the story starts on the Ice Planet, Tau Volantis, which we are told is the Marker home world. A large part of the story takes place on the frozen hostile planet surface that sees you battling the elements as well as the “normal” necromorph threat. It was a refreshing change at first and did make for some unique, interesting set pieces, but ultimately took more away from the character of the game than it added.

Fortunately, almost half of the early portion of the game takes place in a debris field that includes a number of derelict ships. This portion of the game does a much better job of recapturing the spaceship graveyard claustrophobia that helped make the first Dead Space such a standout title. The background of being in the Zero G environment of the orbit of the planet adds to the grand space opera feeling of the set piece transition between ships to such great effect, that it’s absence is felt later on.

Optional missions are found throughout and do offer some good rewards and additional insights into the story. However, they may be partially responsible for the overall game feeling slightly bloated, especially as the optional missions tend to have very similar environments and puzzles to the critical missions. That said, the optional missions do feature some varied combat scenarios. Combating necromorphs is still generally jump-scarily enjoyable, but the inclusion of an opposing force of human Unitologist soldiers is a weak addition (not least as they aren’t very strong) and feels out of place in a series that has firmly bolted the label of “strategic dismemberment” on to its own DNA.

The overall story is well presented and I think would be comprehensible and cohesive to anyone who has not played the first two games, but feels constrained by the weight of information that has gone before it. The love-triangle feels slightly contrived and shallow. Keeping track of who did what with what marker in which timeframe becomes a bit of a memory minefield and the final conclusion does not feel all that final. The lead antagonist is not that…antagonist-y, he is more of a demented homicidal nuisance. You almost end up feeling sorry for his delusional rantings and lack of his soldiers ability to put up a fight in the name of their misguided fanatical religious genocidal intentions. 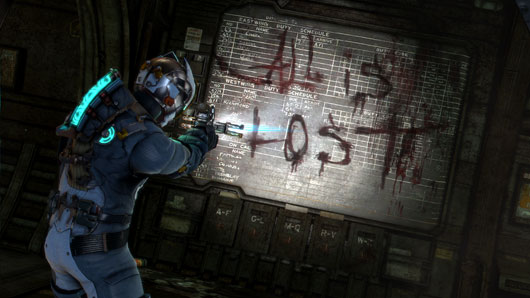 When growing accustomed to a series, it can sometimes be easier to find fault than it is to remember all the commendable game enhancing key features of the franchise. Dead Space 3 is graphically great, with some stunning snowy and breathtaking space vistas that act as impressively suitable back drops to some highly detailed space ships and buildings. The various suits you acquire as the story progresses are lavishly detailed and the floating inventory display and spinal health indicator remain both functionally useful and iconic. The set pieces do an excellent job of inserting action into the balance of tension and combat and the Zero G set pieces are great every time. The puzzles are in keeping with their environment and just the right side of being challenging without being frustratingly taxing. When you are strategically dismembering necromorphs, combat is generally as strong as it has ever been.

At over 20 hours there is plenty of game, but this could have possibly benefited from a bit of trimming. The enemies faced are generally interesting and there are a few new inside-out faces making an appearance, but a few of the necromorphs are a bit too similar in design and/or have similar easiest methods of dealing with them. This leads to a few too many occasions of just seeing the same enemy types repeated in greater numbers. I also think that the one drawback of the weapon upgrade system, in that they are not able to take your weapon away from you and force you to use a different gun for a certain section. This often helps give a unique or differing feel to a portion of a shooting game and is a weapon removed from their narrative arsenal.

Once completed, the New Game+ options give plenty of reasons to replay. Increasing difficulty settings are available, as are a number of other options. Classic Mode – a hard mode with only the original weapons and aiming method from the first Dead Space available, with Co-op turned off. Pure Survival – where enemies don’t drop health or ammo and everything needs to be crafted at a bench. And Hardcore – in which you can save as often as you like, but any death results in the game resetting to the very start of the story.

Highly polished, slick presentation throughout
Weapon upgrade system is a good addition
Great puzzles and some great set pieces
Shows some signs of franchise fatigue
Human soldier opposition a weak addition
Story is often absorbing and well presented, but can feel too dense and/or bloated

There are some missteps that have been taken in stepping away from the roots of the franchise and this certainly does not do anything to address the concerns of anyone who criticised Dead Space 2 from departing from the original Space survival horror genre. Dead Space 3 continues down the path of the second game in being a third person action game with a space horror setting. In doing so it has aped the changes seen going from the first Alien film to the second film in the franchise Aliens, but this third game is not the widely unpopular prison that is Alien 3.  Enjoyable, entertaining and highly polished, Dead Space 3 should please most fans of the series and sci-fi action fans who are not scared off by the jump-scares should also find plenty of reasons to become a fan. Just don’t become a fanatical religious zealot, this game has too many of those already.