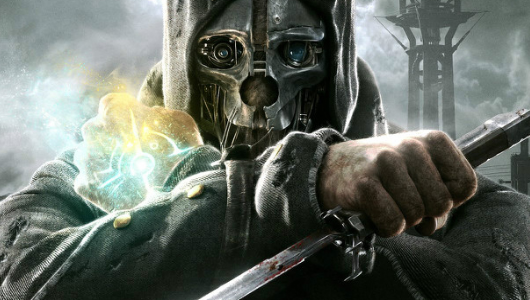 Revenge: it’s a popular motive in story narratives and for defining characters. So in a game where revenge solves everything, and all paths lead to revenge, you would be right to think that Dishonored executes the classic motive with pinpoint precision and exciting new gameplay. Well – it almost gets there.

Welcome to the city of Dunwall, loosely based on 17th Century London. Plague and rats run rampant in the street, and machines have just recently come into widespread use after the discovery of the properties of refined whale oil. The city is a dank, dismal place for the most part, rife with gangs of thugs, illegal operations and citizens cowering in fear of the plague. Our first glimpse of the city however, is a stark contrast.

A clean, well kept fortress on the bank of the river is the destination of Dishonored’s protagonist, Corvo Attano, as he returns from an assignment to find a cure for the plague – a strange quest for the Empress’s personal bodyguard, as NPCs are quick to point out during your ascent through Dunwall Tower’s lock. Upon reuniting with the Empress, dark assassins appear from the shadows to murder her and kidnap heir to the throne, Lady Emily.

As the assassins disappear without a trace, Corvo is left with the dead body of the Empress for the Overseers to find him, and accuse him of murdering the person he was sworn to protect. Framed for the murder, and thrown into prison, Corvo is then contacted by mysterious allies who help him escape from his cell, with the promise that he’ll be able to exact revenge on those that framed him.

It wouldn’t be a dark, steampunk action game without some supernatural powers – the mysterious Outsider appears to Corvo on his first night of freedom and grants him access to powerful abilities. But as the Outsider is quick to point out, the decisions and actions the player takes during missions will greatly alter the future of Dunwall. From more rats to heightened security, every single action affects the balance of chaos in the world.

Taking stealthy, nonlethal paths to Corvo’s goals will result in a lower level of chaos, and a better ending to the game if the overall chaos is low. However, the option to take the direct, violent route is always an option. It’s a constant battle of weighing up the pros and cons to each decision you make, but more often that not, circumstances will change very rapidly and you may find yourself running from fights you had tried to avoid, or even take enemies head on if the situation calls for it. 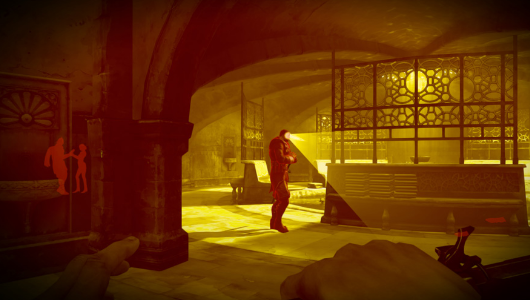 Using Dark Vision will show you all NPC’s, even through walls. When upgraded, it will also show you machines and collectibles.

The head-on approach can often feel a little cumbersome. Unlike other titles that allow dual-wielding weapons, you have no other option than to use your blade as your right hand weapon, meaning that to fully adapt to an ever-changing combat situation, you’ll need to switch your left hand between powers, weapons and equipment. While you can make certain options available as quick buttons on the D-Pad, these aren’t always going to be useful to your situation. Instead, you’ll need to bring up a power wheel to select the intended weapon or power, but doing so doesn’t pause the game, only slowing down time – another example of having to make quick decisions.

You can upgrade your weapons and powers in a few ways. Physical weapons like your pistol, crossbow and even your mask can be upgraded through purchasing or finding blueprints to bring pack to Piero, your allied inventor, between missions. He’ll also sell you ammunition and equipment through coins and items of value you can find scattered across the whole of Dunwall.

To upgrade your supernatural powers, you’ll need to find the Outsider’s Runes which allow you to purchase new powers and improve on your current ones. There are also a number of bone charms to find for which you can equip a number at a time. Once equipped, each bone charm offers you a different perk like less fall damage, more health, more mana and such, and last for as long as you have that bone charm equipped.

To find these supernatural artifacts, the Outsider also presents you with a heart he designed, which will point out the relics and beat faster as you get close to them. The heart can also speak to you, giving some backstory to the area you’re in, making it an unofficial, and non-intrusive sidekick, but still highly useful. Especially when Runes aren’t exactly common, and some of your powers require a fair few to make them completely useful. Blink, for example, feels very limited to extremely short distances until you open it’s second level, so getting around for the first few missions may seem tricky at times. And let’s not even get into how many Runes are required to let you possess other humans.

The Overseers, the enemies of Dishonored, have some dangerous tools at their disposal which the player will have to overcome. Wall of Lights, Watchtowers and electrified sentry pylons will get you killed pretty quick if you’re not careful, but they can be used to your advantage. You can rewire any piece of machinery so that it will work in your favour and against enemies. However, getting people killed in this manner will result in a higher chaos rating. Instead, you have the option of simply disabling the devices, but going that route will mean enemies are more likely to investigate and catch you. It’s just one of the many decisions you’ll be faced with constantly. 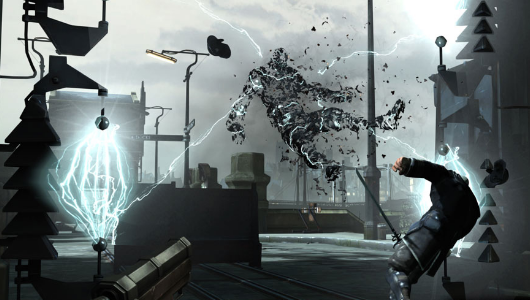 Rewiring a Wall of Light means it’ll kill enemies instead of you, which can sometimes become a hilarious taunting game.

Each mission will also have additional objectives along with your main target, usually these will open the doors for more items to buy, upgrades or easier paths to take, so taking the time to explore your surroundings is vital for a good mission outcome. Stealth is also essential for a low chaos rating, and this was one of the most disconnecting aspects of the gameplay. To stay undetected by enemies, you’ll have to rely on either Dark Vision which allows you to see overseers and their lines of sight, leaning around corners or a good mixture of both. When leaning around corners however, you’ll actually lean your entire body out from around cover, which in reality would mean you’re right in the sight of the enemy. Once you can get your head around when enemies can and can’t detect you easily, the stealth portion of the game doesn’t get any easier in reality. It can be a long game of patience and planning to move around unnoticed, but the reward in doing so is a fantastic feeling of accomplishment.

While using typical sneaking skills will serve you well, you have a collection of supernatural powers at your disposal which, if used correctly, can make the difference between a flawless assassination or an all out brawl. Blink is by far the most useful for moving around undetected, so much so, that the game forces you to have at least the first level of the skill. Used effectively, you can move quickly out of an enemy’s line of sight, get up close behind in an instant to neutralize them or even just to pickpocket a vital key. The use of combinations thoroughout is also paramount: spawning a Devouring Swarm of rats to distract enemies while possessing one of them to get by unnoticed, or bending time to plant a spring wire mine on an enemy so that when time returns to normal, the trap kills an entire group. Dishonored is a game that rewards player ingenuity like no other.

Fantastic design based around decisions and outcomes.
Looks and feels like an epic, dark story.
Interesting powers.
Rather standard revenge story.
Combat is a bit haphazard.

While the story follows an almost routine pattern on the path to revenge — man gets framed, goes after revenge, there’s a big twist and so on — it’s rare for a new IP to be absolutely spot on, and Dishonored does a lot of things better than other games out there. Dishonored is not only a game that you’ll want to play again, it’s also a game you feel you have to play again, just to see if you can do a mission better. And that’s quite a rarity in games today.