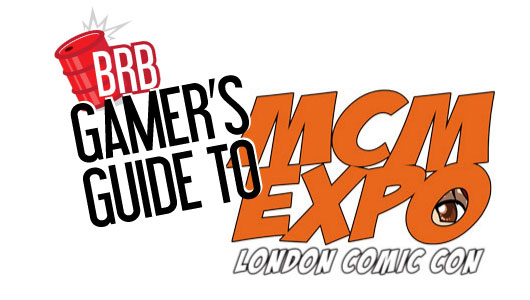 Both in the States and increasingly in the UK, Comic Cons are becoming a great opportunity for gamers to get hands-on with upcoming games prior to their release. MCM Expo London is the UK’s biggest comic convention and usually has a sizable gaming section that seems to get bigger every time. As a veteran of several successful comic con campaigns, I thought I would take a moment to pass on some of my edumacated “wisdom” and point out some highlights for gamers to see at this weekend’s show.

For anyone that missed out on Eurogamer Expo last month, this is a great chance to catch up with some of the bigger hitters;

Halo 4 – Likely to be the same multiplayer only build as seen on the show floor of Eurogamer, but getting hands-on with the Master of Chiefs again is worth not waiting for. Not to mention a chance for some early practice with the new features, ready to teabag noobs on November 6th.

Ni No Kuni – First shown in the UK at the last MCM Expo, I have had the opportunity to play a few more times since, but public showings have been few and far between. The stunning Studio Ghibli visuals should be enough to entice the comic con audience in, but the possible saviour of the JRPG should be of interest to any gamer and, if you have not done so already, getting hands-on before it’s launch in January next year is a worthy use of your time.

Metal Gear Rising Revengeance – Worth seeing for the game, but they are also doing a similar deal to what they were doing at the Eurogamer Expo; complete the demo within a certain time limit and win a lenticular poster or T-shirt depending on how well you do.

Ubisoft – They’re exhibiting Assassin’s Creed 3 and Far Cry 3. Presentations will also be given for both games at the MCM Games Stage (Normally located in the centre of the gaming section).

Capcom – Once again showing off with DmC and Lost Planet 3. Both deserve some of your time, especially as they are both being produced by all new developers.

Nintendo – Their stand will likely be mostly the same from Eurogamer, giving gamers a chance to get hands-on with the Wii U hardware and a small selection of upcoming 3DS titles. New hardware is always worth another play. 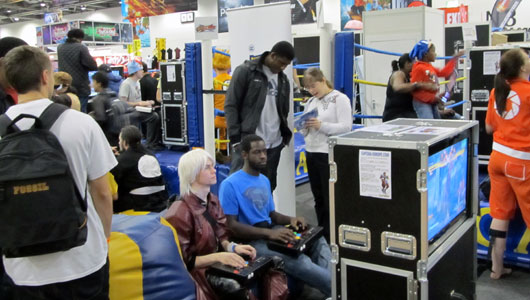 There are a number of highlights even for those that attended Eurogamer Expo. The first is queues, or rather a lack of them. Due to the volume of people, getting in in the morning is perhaps even more of an issue than it is at Eurogamer, however, once inside the queues for the games themselves are minimal compared with those at Eurogamer. There are still small queues at most of the stands, but are commonly just waiting for the next round or an available pod. There are less games available than at a dedicated gaming show, and a lot less in the Indie/downloadable department, but there is a good range of high profile games on display.

There is usually something of interest that was not at Eurogamer and I will be making a beeline to go see, friends of BRB (partly as they listen to our podcasts) developer’s Mediatonic latest offering, Foul Play.

Microsoft and Namco Bandai will also be bringing a selection of other titles with them and there are also a number of other companies exhibiting on the show floor including; 2K, NIS, Rising Star, Square Enix, Tecmo Koei and Tinman Games (developing titles such as Judge Dredd for iOS)

There is such a plethora of movie, TV, comic and manga related content and items for sale at the show that there is very likely to be something that crosses over into your interest. That said if you only want to go for the games then there are a number of other sources of entertainment for gamers throughout the weekend. A number of presentations will be held at the Games Stage, the highlight of which is probably the Tekken Tag Tournament 2 tournament, which sees the country’s 16 top players fighting it out for the chance to represent the UK at the Electronic Sport World Cup. *** *EDIT*: Have also just been informed that BioWare will be holding a panel at 12pm on the Saturday — you will also find me there!***

There is also a large cosplay competition and more people cosplay here than at any other event I have been to. This can be a source of amusement (both to gamers and others) as noting where the gaming (etc) reference is from is often fun. That said, last year, seeing several blokes dressed as Sakura (i.e. in a short skirted Japanese school girl outfit) was somewhat disconcerting!

So, in case you hadn’t guessed it already, even if you do prefer Doctor Mario to Doctor Who and think Warehouse 13 is a level in Splinter Cell, there is still plenty to keep you busy at MCM. My advice for anyone solely interested in gaming, and not too bothered about the presentations would be to just attend on the Friday or the Sunday as they tend to be a bit quieter than the Saturday. Whichever day you go though, take money! The cashpoints in Excel are always rammed (if you have to though the cashpoint downstairs near the toilet is usually quieter) and there is always plenty to buy, I rarely escape without a new awesome T-shirt and last time I got myself drawn by a manga artist! 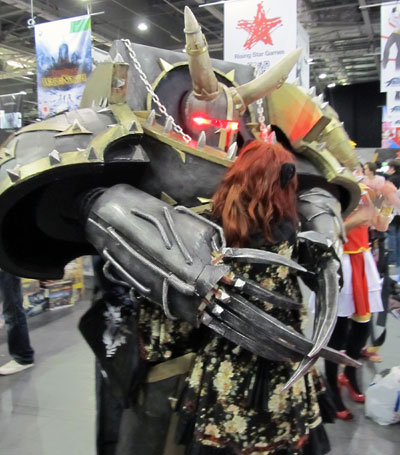 Another highlight of the show is the free hugs for all policy. Even this guy!