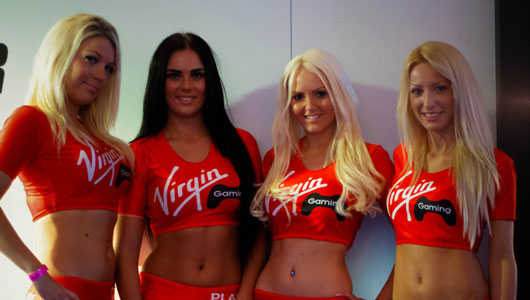 Eurogamer Babes and Strong Female Leads: Are Women Considered People In This Industry Yet?

Eurogamer Expo, Thursday, 11am. The main entry queue begins to move in. I beat the rush to get in with the dregs of the press queue and sweep up the steps, ready to play some games.

Before me stand two svelte ladies in the tiniest Virgin Media vests and shorts. QR codes – which tend to work best on flat surfaces – are wrapped around curvaceous bottoms. Scanning them probably leads to a Virgin promotional website. I didn’t try to scan it. Nobody I spoke to had either.

How about that. Five hundred Great British Pounds, in exchange for shedding my self-respect to my 2,300 Twitter followers. Dignity has finally been valued.

The booth babes at Eurogamer were out in force this year, more prominent than in years gone by. We know why this is problematic, but a reminder for those out of the loop: it’s horrible, essentially, and sets a terrible precedent for the industry. What better way to encourage poor stereotypes of the average gamer than to fill an expo hall with scantily-clad ladies dipped in Dulux-color-chart bronze gloss paint?

On the show floor, Company of Heroes 2 dolls in tank tops and hotpant camo shorts wandered back and forth, wiggling hips and flashing smiles as they handed out leaflets. They too had useless QR codes on their posteriors. Were they even aware? Alexis Trust of the WGL didn’t think so; through Twitter, she has told of several girls’ surprised reactions at the news that their backsides had been barcoded.

Both Company of Heroes 2 and Virgin Media girls were swept aside into the over-18s area following day one of the Expo, and with great reason: the Expo has, this year more than any other, hosted entire families and children on the show floor. The last thing I’d want my kids to see is a lady in an NVIDIA catsuit – an eternal staple of Eurogamer, it seems – posing beside the stand of a game she may well know very little about.

Perhaps I am giving “booth babes” less credit than they deserve. Perhaps not.

My girlfriend and I had a heated discussion this afternoon, perhaps missing the point of why people are becoming agitated. She asked why it was an issue for booth babes to be there if games such as Dead or Alive 5 actively encourage, albeit subtly, ‘appreciation’ of the female form. Thus: Eurogamer’s worst offenders were the girls dolled up for products to which they had no relation. Company of Heroes 2 does not come with an Exhibitionist Infantry; your Virgin Media box does not arrive in a silken corset and stockings.

Yesterday morning, Eurogamer founder Rupert Loman made a public apology for the presence of “booth babes” at the Expo, promising that it wouldn’t happen again. “When we talk to publishers and exhibitors, we discourage them from bringing booth babes – and encourage them to bring developers.”

A developer session – we’ll keep it nameless, to keep this thing short – talked of Strong Female Leads, a concept I didn’t even recall still being a thing in 2012. Is that still a thing? Can’t every female lead be strong, anyway?

These words, and the expo girls, sit concurrently with one another because they smack of oddly backwards attitudes. Do we still need to talk about Strong Female Leads like they’re a big deal alongside Strong Male Leads? Do we need scantily clad models who can’t tell a Scribblenauts from a Psychonauts, desecrating stands of otherwise wholesome, excellent games at expos?

Answer that question yourself. I sincerely hope that you don’t need my assistance, or that of anybody else, in order to do so.

You know what? If you’re a booth babe, email me (jon [at] bigredbarrel.com). Explain why you do your job and if you detest everything that it entails.