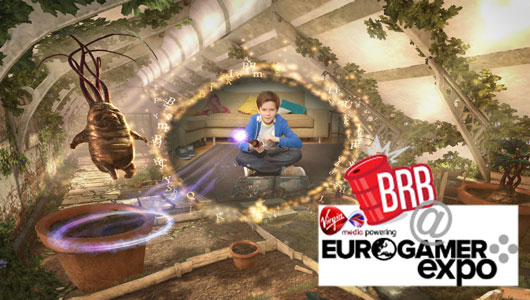 Playing games at an expo such as Eurogamer is the anti-internet. It’s so easy to be Cynical and Snide when watching a game reveal on a livestream, or repeating on Twitter something you read on a liveblog written by somebody infinitely more talented. Poking fun is easy; raising genuine opinion requires effort, and you’re not doing that.

Being at an expo is the opposite: it’s easy to gush too much praise, just in case somebody important is nearby and overhears you criticising anything. You feel bad for the hired reps, briefed the day before on a product or products they will forget about in a week-long haze of post-event drink and sleep; it’s only polite to make them think they’re doing a great job of demonstrating whatever they’ve been handed that day.

Genuine objective thoughts are hard to find in the middle of these two avenues – giving things A Fair Chance whilst loosening Cynicism’s leash is a bitch. Wonderbook, Sony’s latest foray into Augmented Reality technology, is a meeting of these two worlds of opinion, an end result that combines home truths with wonderful new ideas. The end result? Cautious, subjective optimism.

The Wonderbook itself is a 12-page collection of AR markers broadly bound like a children’s storybook. Each marker, from cover to cover, is unique, allowing the required PlayStation Eye camera to recognise pages and produce the appropriate visual overlay on your television. The intention is to essentially create, at a basic level, a virtual pop-up book which retains essential book interactions – as much as turning a page – whilst introducing out-loud narration and experience-enhancing gaming touches.

Book of Spells is the first title to be released under the Wonderbook banner, taking the form of a forbidden spellbook inside the Harry Potter universe. Split into a handful of chapters – each requiring a full ‘read-through’ of the AR book – it introduces a number of spells from the wizarding series and allows players (readers?) to perform them for themselves with a wand augmented onto the end of a Move controller. Each spell is accompanied by backstory – narrated by, but never actually confirmed as, Potter actor David Tennant – richly presented with animations and interactive elements inside the Wonderbook itself. The book can be freely moved about and manipulated, retaining the visual overlay as pages turn or are flipped, rarely breaking the augmentation illusion. It’s enthralling. 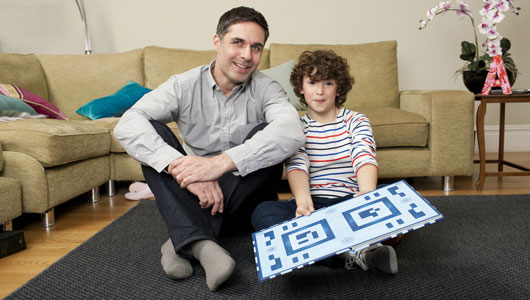 Typical PR ‘lifestyle shot’: ideal audience, ideal situation. More importantly, for You and I, a look at the Wonderbook’s actual pages.

Neatly, Book of Spells takes advantage of the Wonderbook in two ways. For some spells, such as levitation, the game will spawn objects in the immediate vicinity of the book which can be manipulated as independent objects (and, in a nice touch, can be scooped up with the huge book and tossed about). Spells which require further interaction – such as fire-casting or disarming – will involve leaping inside the book itself and taking on challenges rendered with ‘magical ink’, be it setting fire to targets or dodging and deflecting incoming spells. The innovation is encouraging at this early stage, setting an example for future Wonderbook titles to follow.

Whilst the technology and presentation are wonderful, there’s still a Cynicism which I can’t escape when I examine the Wonderbook. Will the high-profile license boost sales? Would parents rather buy a Kindle? How many people still own a PlayStation Move? New innovation always encourages curiosity and questioning, and Wonderbook is no different: but unlike, say, the one-trick-ponies such as EyePet and Eye of Judgement, this is an idea which deserves each and every sale it could generate.

Far be it from anybody at BRB to discourage reading, Wonderbook is an idea which deserves the support of any and all who come up against it. The reps of Eurogamer have been giving it their all on the show floor all day today, inviting everybody who passes to learn Wingardium Leviosa and Incendio – and rightly so, too. Between the Move, the Eye and augmented reality tech itself, these old dogs deserve another pop at putting something genuinely magical together – and, appropriately, Book of Spells could be just the thing to make it happen.

And you can’t say any fairer than that.