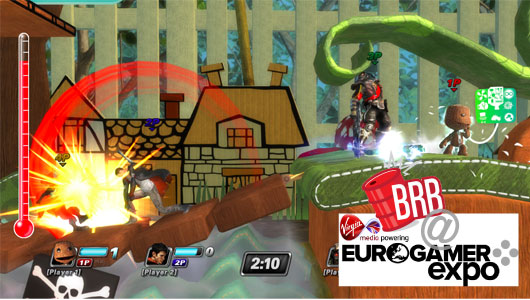 Once in a while a game comes along which, on the surface, has much to dislike; yet at the same time demands and merits at least the tiniest hints of appreciation. PlayStation All-Stars Battle Royale (or PSASBR – pronounced Pissasbur – as Sony’s multiplayer scrapper is becoming warmly known here at BRB) is a tricky game to love or hate, sitting somewhere in the middle. Appropriately, it’s a visually grey game, straddling so many contradicting styles and universes that the end result is ‘something’, a game packed with a variety of characters but lacking in real character itself.

Whether fighting inside Chop-Chop Master Onion’s dojo in the Parappa stage or rebounding off one another on the planet of Metropolis (a la Ratchet & Clank), something is never absolutely right when seeing PSASBR in motion. Lining Fat Princess up alongside the flame-headed Sweet Tooth and sending Killzone‘s uncomfortably generic Colonel Radec into battle against the elfen-eared Jak looks odd. Shoehorning the chunky, flappy-mouthed Buzz into the background of the muted palette of the LittleBigPlanet stage, which inventively changes backdrops level elements using the Pop-It lasso, is the worst offender in a game already renowned for its identity crisis. 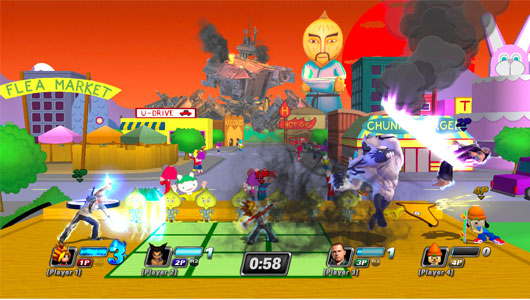 Something doesn’t look right here, does it?

However, look past the visual clashes – oh God, the endless visual clashes – and you’ll find that PSASBR offers up solid, if unexceptional square-offs. Each character is primed for lighter, faster attacks as well as slower, more damaging ones. Most matches are spent hammering into one another from close range, occasionally backing off for a third ranged attack – think Kratos’ bow and arrow, or Nathan Drake’s RPG. Multiple levels of special attack can be charged up and unleashed to obliterate the competition; most kills and least deaths earns the biggest score and wins. Everything is functional. It works. Which is fine.

Also fine – finer than fine – is a genuine sense of balance across the roster. Heavier characters like Bioshock‘s Big Daddy move characteristically slow when both walking and attacking, but deal big damage when up close. Natural-born fighters such as Kratos deal in furious melee attacks much in the same way as Jak fires ranged weapons – pretty damn effectively. That the game works across PS Vita and PS3 during multiplayer is great, too, with all who buy one copy of the game receiving the other for free.

PSASBR is Marmite. It will appeal to some and disgust others, but at its core it is a solid, unremarkable game, a mixed palette of Technicolour glory and warzone browns and blacks. It lacks the refinement and consistency of that other console-exclusive multiplayer scrapper, but that it’s at least fun and does things right is commendable. Play it with your eyes shut.