Assassin’s Creed III: Liberation is the by-product of the AC III universe and a bowl of custard. Take a scalable new game engine as used in the new console title and apply some treacle to the soles of your character’s feet. That’s Liberation in a nutshell: an Assassin’s Creed game that, currently, doesn’t really go anywhere with much speed.

Playable on the Eurogamer Expo show floor, the Vita exclusive revolves around new heroine Aveline, an 18th century assassin doing her own thing in New Orleans at the same time as AC III star Connor Kenway. She spends a lot of time, as it turns out, hanging around Louisiana bayous, and the show floor demo featured two stages set in the swamps of the state as well as the city of Nawlins itself.

Aveline is equipped with the same repertoire of skills and gizmos as her fellow assassins, packing hidden blades, smoke bombs, pistols and swords for deadly and efficient murdering – topped off with a sassy eagle-peaked pirate hat (and if it’s not a pirate hat, she has No Business wearing something that resembles one). While having plenty of equipment is no bad thing, accessing and using Liberation‘s armoury is the first of a few clumsy missteps the game makes, ultimately marring the overall experience. 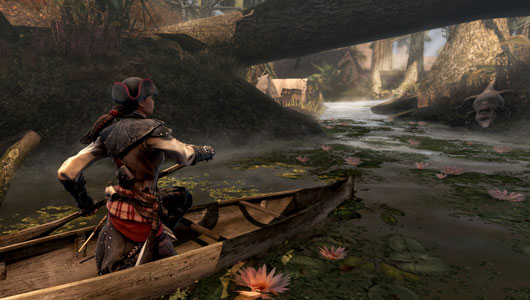 Liberation aims to replicate AC III‘s lush forests, but they’re underused and look rough, as if the scaled engine forgot to pack sandpaper before the move to Vita.

Weapons are, for the first time, dual-wielded, mapping short-range weapons such as blades and swords to one button and mapping longer-range pistols and bombs to another. Much like Assassain’s Creed III it sacrifices the traditional face button map shown in the HUD. Close combat still retains kicks and counters to second-guess enemy attacks and, as always, fleeing is a viable and wise option should things become too hectic – until you actually try to flee. Controlling Aveline is an awkward and occasionally frustrating experience which feels uncomfortably floaty, as if, yes, she’s knee-deep in custard. Climbing buildings is a joy, but manipulating her with precision when trying to escape tricky situations just doesn’t work out.

There’s something very rough about Liberation almost everywhere you look. Whether it’s the control issues – introducing your demo with ‘swipe down to row’ touch controls isn’t a great start, nor is an alligator-wrestling QTE – or the detailed, if jaggy visuals, it feels and looks almost half-assed. AnvilNext may be a scalable engine but after playing both AC III and its portable sister something appears to have been lost in translation. It feels too loose, too imprecise in places, despite a great sense for scale and awe.

And that sense of scale impresses. New Orleans looks fantastic provided you don’t examine it too closely and a lot of work has been put into the presentation, typical of the series and of Ubisoft’s penchant for passionate, if not necessarily eternally accurate historical inspiration.

But this sort of scale isn’t designed for playing on the go, despite the Vita claiming its stake in portable ‘console-style’ gaming. Liberation is a console game shrunk to a smaller screen it shouldn’t really have been made to fit, paying the price with a poorly scaled game engine and disappointing control issues. If Ubi are hoping to liberate the series from its rooting in the living room, this isn’t quite the game for the job. Don’t buy that Vita just yet.