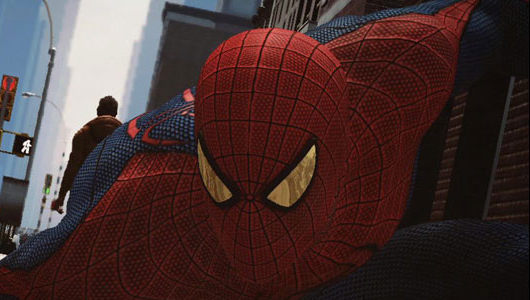 The Spider-Man 2 video game tie in was, to date, my favourite movie tie in game of all time, due to it’s robust controls and overall gameplay. Since then the Spider-Man video games have never been able to measure up in those aspects. But Beenox now have a few Spidey titles under their superhero belt, and with the latest movie tie in, they’re once again unleashing the webslinger into an open world Manhattan.

The Amazing Spider-Man actually takes place after the film, as an epilogue to what happens after Dr. Curt Connors ill-advised experiments turned him into the Lizard. The corporation Oscorp have continued his research in secret, creating a number of infectious cross-species creatures, until the new head of R&D – Alistaire Smythe – shuts the program down in favour of his nano- and macro-robotics. However, on a visit to the Oscorp facility to see his girlfriend, Gwen Stacey, our hero (as Peter Parker) inadvertently riles up the creatures who promptly break out of containment, infect the Oscorp staff with a cross-species disease and then run loose into New York city. It’s now up to Spider-Man to not only bring in the creatures, but to also break Dr. Connors out of his cell in the local mental institute so that they can work on a cure to save New York. It’s good to see that Spidey is not above cleaning up his own mess.

It may sound like a cliched storyline, but Beenox have really gotten into the Spider-Man story and brought it in line with the new movie. It’s made blatantly obvious that this Spider-Man is still a teenager, whether it’s the internet memes, references to online gaming, the fact that he obsesses about not being able to use his phone or the New York public social media feed inspired by Twitter. But since this is Spider-Man – who is known for his humour – you’re able to take this with a pinch of salt, as the story itself is fantastic; some parts of the game’s story really could be easily adapted to make this a true sequel to the film. The stealthy side to the missions, using webs to track down escaped cross-species creatures and the huge boss fights would look perfect on the big screen. But before I get too carried away, let’s get back to business – this is a video game, one where you control Spider-Man whose bread and butter is webslinging around New York city, right? 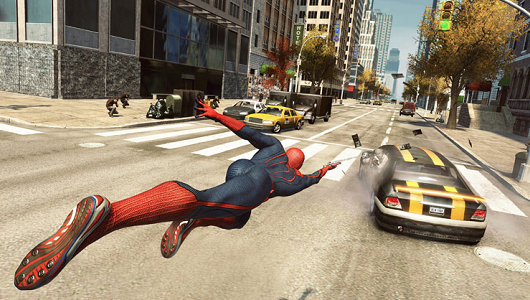 Whilst the option of locomotion via the medium of webslinging is always available, it’s not presented as Spidey’s primary transport choice. The new ‘Web Rush’ mechanic will primarily have the webhead throw some webs in a direction and pull on them to send him in that general direction. Out on the mean streets, you can string together quick-fire Web Rushes to create some natural and stylish lines, where Spider-Man will leap, run and web his way on his own to the destination you’ve selected. You can even hold the Web Rush button to enter a slowed state to look through the eyes of Spidey’s to hit some precision targets, perfect for when you’re trying to get through a race, grab a floating collectible or sling yourself into your next mission start point.

Beenox are experienced at having Spider-Man navigate interior spaces so, playing to their strengths, most of the story missions occur inside, where you’ll get some new uses for Web Rush. You’ll still use it for precisely planting Spidey’s spandex covered feet on perches, but you can also use it to take out enemies from the walls and ceilings, either through a stealth takedown or rushing in to beat up the bad guys. You can also throw in a Web Rush during combat to the same effect, taking Spider-Man directly to the enemy or grabbing items from the environment to chuck at some enemies, really rounding out the Web Rush as a “does everything” button.

Luckily, a lot of enemies are resistant to being directly Web Rushed, meaning that this attack becomes more of a set-up move as you upgrade the webhead’s powers. Combat is very reminiscient of Batman: Arkham Asylum, with combo multipliers, counters and signature moves and specific weaknesses depending on the type of enemy. As a result, it can be amazingly gleeful to watch as your button mashing translates into Spider-Man fighting Oscorp guards, robots and infected civilians like only a Spider-Man can. 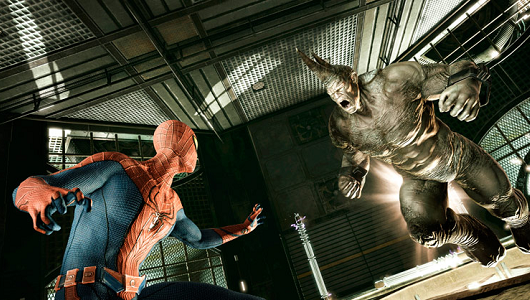 Unlike the comics, some of Spider-Man's enemies were never human to begin with. Rhino is actually a real rhino crossed with some human DNA.

Being a friendly neighbourhood Spider-Man, though, there’s more to do in the city, such as protecting the innocent and keeping the streets safe. While the photojournalist missions (which often give some good references to other Spider-Man villains) and infiltrating Oscorp research labs offer some interesting side quests, they’re in limited number, and you’ll find yourself transporting infected people and mental patients a lot more often. This adds what are essentially a bunch of collectibles to an already huge amount of collectibles that can be found both within missions and in the New York skyline in the form of comic book pages. Sadly, after you’ve finished with the more interesting side quests, you find yourself left with a large number of inferior side quests that boil down to a series of tedious tasks.

Thankfully, it’s not all (Dr) doom and gloom; there’s also two types of ‘Xtreme’ challenges, which sees the return of Steve Campbell, famous for his work as the narrator and announcer in the previous Spider-Man movie games. And although the film’s cast don’t lend their voices, the cast for the game do a fantastic job of portraying the characters, right down to Spidey’s signature quips, although there are extremely limited lines of dialogue during side quests which, sadly, adds to the tedium inherent in many of these additional missions. However, we do get a very special voice appearance from none other than Stan “The Man” Lee!

Great epilogue to the movie.
Spider-Man’s never been so stylish.
Web Rush does it all.
Limited side quests.
Nothing really new to the franchise.

Whilst not necessarily brining much new to the table as far as Spider-Man games are concerned, The Amazing Spider-Man is a solid movie tie-in that plays well and at least adds a decent epilogue to the movie. But after you’ve completed the main story and managed to grind through the tedious side quests, there’s not much in the way of replay value and there’s only a few true difficulty spikes throughout the game if you decide to crank the difficulty up to the hardest setting straight from the start. You’ll get a good few hours of enjoyment from the game, but it might only take you a week to complete everything, meaning that die-hard Spider-Man fans stand to get the most from this game.

The review copy of this title was rented by the author.
Official Game Site