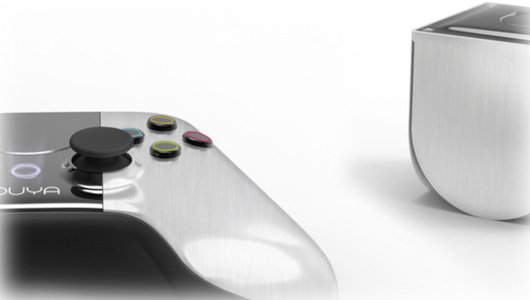 Ouya! That’s the sound of $5 million trickling into the Kickstarter page of the open-to-all Android games console of the same name. Promising a brand new landscape for developers to operate on, this little-console-that-could is full of promise and potential – but whether this box of wonders has the business talk to match its publicity walk remains to be seen. And with good reason.

Despite only launching a week ago, Ouya’s target of $950,000 has been smashed five-fold, guaranteeing the console’s future development and release sometime early in 2013. That money goes towards covering console production and approval costs, as well as incubating initial first and third-party development.

Ouya’s creators – including superstar designer Yves Béhar, who smoothed the curves on the chunky XO budget laptop and Bezier-curved Leaf lamp – pitch the console as a “living room” box, delivering a big-screen, surround-sound experience that a mobile device can’t offer because it’s just a phone.

But the real agenda lies in Ouya’s development potential as a way of easily bringing console-style games within reach of independent creators, free of the shackles that come with mainstream game console development. They can make ’real’ games, just like those found on PlayStations and Xboxes across the globe, but they only have to buy a development kit from Ouya and brush up on their Java in order to develop something they can play with a joypad on the sofa. The only caveat is that some of the finished title has to be free to play in order to be approved for the system. It’s a bedroom coder’s dream come true.

But is it? Even with 35,000 Ouyas guaranteed to be sent to backers at the time of writing, titles such as Minecraft and Dead Trigger, featured in concept images of the console’s user interface, may not actually make it to the system. Minecraft dev Mojang has only gone as far as to say that they will “follow the development of OUYA and see how it resonates with gamers”. That’s not exactly a quote for the back of the box, but it’s enough for the Kickstarter page. There’s a lot of optimism surrounding the project – as there would have to be – but this has happened in the past too, most notably with cloud streaming service OnLive. 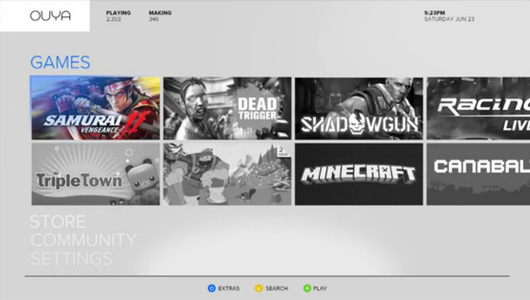 How many of these games will really end up on Ouya at launch?

OnLive was tipped as a saviour, and has yet to prove itself – and good luck finding retention statistics which suggest otherwise. Sony has picked up Gaikai to presumably stuff into its televisions, if only to add another bullet point to their feature lists. But when Steam sales still bring in megabucks and my own OnLive box begins to collect dust, are people really as interested in a new platform as initial buzz suggests?

Put an exciting proposition on Kickstarter and people will be excited. A games console for $100 with a revolutionary-sounding concept is a headline-grabber, just as OnLive was when the company gave away thousands of set-top boxes at games conventions last year. But much like OnLive, Ouya could be carving out a niche that nobody needs, but merely think they want because it’s something new.

Gamers are fickle. Give them Call of Duty turret sections and they will complain; take them out and hellfire will rain upon your development studio. They want the old, and the new, because they can. With Ouya, there’s a danger that these very big promises won’t be delivered upon, and that developers will change their mind about the potential of an Android games console going toe-to-toe with Sony and Microsoft – especially when both provide a platform for indies, Sony’s Pub Fund helping to create titles such as Joe Danger and upcoming Vita fighter Guacamelee and the Xbox LIVE Indie Arcade bringing success for the likes of Beat Hazard and I MAED A GAM3 W1TH Z0MB1ES!!!1. It’s not as accessible as what Ouya hopes to achieve, but indie games in the living room can exist.

But, to step outside the living room altogether, the mobile gaming market is probably too lucrative for developers to leave as it is. From Tiny Wings to Triple Town, success stories litter the App Store and Google Play Store like confetti, and it’s easy enough to create a free-to-play title which can be launched on both formats and can be played, potentially by millions – marketing tactics and luck permitting. If Ouya takes off, how many exclusives can be expected for a relatively limited platform? How many games will be ports of mobile games converted Xperia-Play-style for buttons rather than touch? There are too many unanswered questions, and not enough people currently around to answer them.

Ouya is an interesting proposition – and, at the very least, has shown what can happen to a Kickstarter when some avid reporters get their hands on it during their search for a headline. If this idea had come along at Android’s very advent, when the App Store was slowly picking up momentum, there may have been more potential than it appears to have now. Time will tell how it fares once those first consoles roll out, but in trying to edge into the middle of two very large, lucrative markets as a solution to a problem that never really existed, Ouya may have simply carved out trouble for itself rather than a window of opportunity.