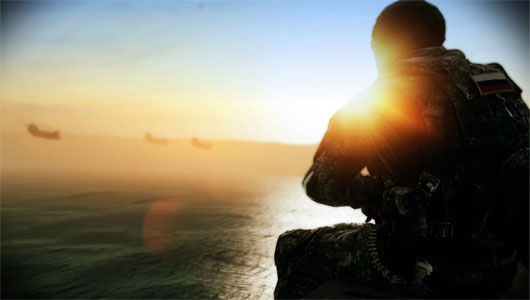 Medal of Honor solidly established as “Battlefield: The B-Sides”

Great news emerged today from the deep caverns of Electronic Arts, as it was revealed that people could buy access to Battlefield 4’s upcoming beta trial, launching in the autumn, for just £40. As well as getting into the early test version of what will surely be 2013’s most mind-blowing shooter, buyers also receive a free copy of upcoming 2012 shooter Medal of Honor: Warfighter, as a thank you for signing up.

Okay, we lie: it’s really the other way round. But the inclusion of a BF4 beta invite with all pre-orders of the latest EA shooter stablemate is troubling, because it stinks of marketing push in a bid to sell copies of Warfighter rather than to ensure that DICE’s servers aren’t empty come beta launch day.

To some, the inclusion of the beta will ensure the guaranteed sale of thousands of copies of this year’s Big EA Shooter Game, making both publisher and developer Danger Close very happy indeed. And it’s fine to believe that. If you’re a moron.

That EA is announcing a pre-order bonus of this status so early on – Warfighter isn’t due for release for another three months – would suggest a lack of confidence on the part of the publisher. The Battlefield beta is now the selling point, rather than a little surprise announced at the last minute for those who had made the decision to part with their money so early. So what does this say about Medal of Honor?

2010’s series reboot of the franchise was not, in any terms, a bad game. It averaged in the mid-seventies on Metacritic and shipped – that’s shipped to retailers – 5 million copies, despite releasing  just half a year after Battlefield: Bad Company 2, and save for some Taliban-shaped controversy did nothing wrong in the public and critical eye. It was, no bones about it, a good game.

Perhaps it’s Battlefield 3‘s massive success and lean towards customisable rented servers – and the rise and rise of Call of Duty – which has given EA pause for thought. That, when stood toe-to-toe with the gargantuan enemy and an equally huge stablemate, it looks a little scrawny. Battlefield, it should be noted, sold – not shipped – 8 million copies in a month. There’s no contest.

It may make you wonder why the franchise still exists. MoH and BF used to be cousins, each master of its own platform and domain, but Battlefield‘s transition from PC stalwart to cross-platform champion should have been the death knell for a franchise that, pre-reboot, hadn’t seen a release for three years. But, a little like the Treyarch-Sledgehammer tradeoff that now goes on across Call of Duty titles, Danger Close appear to be playing second fiddle to the bombastic and altogether better-established DICE.

In using Warfighter as a soapbox on which to announce Battlefield 4, EA is stating that Danger Close’s product is filler. It’s the B-sides release between albums, the straight-to-DVD holiday special in which only half of the cast shows up. Medal of Honor: Warfighter is a Bob Dylan Bootleg Series album: it’s what you know, a little rougher around the edges, almost alternative in the way it lives in the shadows – but at the end of the day, everybody wants to talk about Highway 61 and Blonde on Blonde.