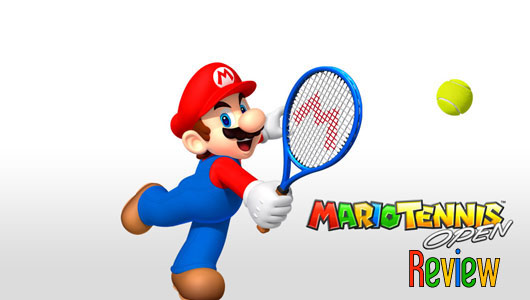 Those that know my gaming tastes will know that I have never been that much of a fan of Mario. While I have a fair amount of respect for the moustached gaming icon himself, I have never liked platform games and so only really have time for him while he is taking some much needed respite from all that jumping around and saving princesses. Put him and his friends in a kart and I am much more likely to be a fan. Likewise, give them a sporting venue to show off his talents and I’ll jump at the chance to join in. Mainly as a Mario sports title, almost without exception, oozes quality and high levels of polish, from everyone of it’s sweaty Yoshi paws. Mario Strikers Charged was great on the Wii, but with England crashing out of the Euros last week and Wimbledon now in full swing, it’s a more appropriate time to ask; Any Wario for tennis?

I never played the original “Tennis” game on the NES. By the time I picked up my Gameboy, Nintendo had re-branded their tennis game to include their new hero mascot of gold coin grabbing sales. So it was as Mario Tennis was released that I first approached the net, it has been built upon in subsequent SNES, N64 and GBA versions, but it was the old 8-bit green and grey graphics that I remembered most fondly when thinking of a game with Mario and Tennis in the title.

Even so, I had forgotten just how much of a fan I was of those little 8-bit bouncing balls until I played Mario Tennis Open. This is, generally, a very good modern day re-telling of that classic tale of good versus…hold on…okay, there is no story to speak of, not even a subtext of a princess rescue in sight. However, there is pretty much all you would want from a tennis game; a number of singles and doubles tournaments that increase in difficulty, local and online multiplayer modes for up to four people, various court surfaces that offer differing ball physics, a selection of unlockable equipment for your Mii and a handful of Mini-games. Three of those mini-games are your standard sort of short, practice type distractions that you regularly see in a tennis game; aiming through hoops or to a particular part of the court, but one of those mini-games is a piece of Mario-styled genius. 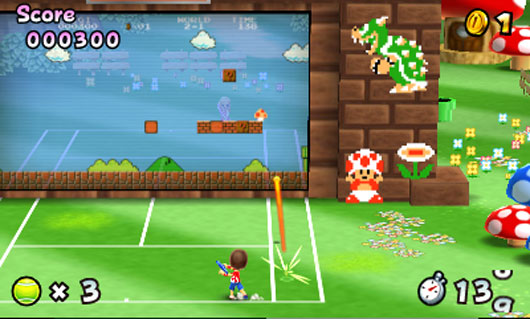 The “Super Mario Tennis” mini-game sees you on half of a tennis court with a large wall where the net would normally be. This wall houses a screen that displays a faithful, side-scrolling recreation of levels from Super Mario Bros. (starting with level 1-1) Everything is exactly where it should be aside from Mario himself and as the level scrolls from left to right, you bounce the ball against the screen to; pick up coins, to “jump” on enemies and to hit question mark block to release mushrooms — which increases the size of your tennis ball. Hitting the appropriate pipe will take you down into the bonus coin collecting area and you will then have to strike the exit pipe to return to the rest of the level. The only criticism of this mini-game is the time limit seems harshly unnecessary, especially given that it is reasonably tricky already and has reply value related to getting more coins or a better overall score anyway. That said it is an enjoyable distraction and a nice piece of fan service.

Whether in the mini-games or out on the court, either by yourself or with your AI controlled partner, play relies on the same basic — but overtly flashy — mechanic. If you manage to get your opponent on the back foot, by hitting a strong serve or shot at them, then as they are returning their shot, a disc of light will appear on your side of the court. Stand on or very near this highlighted point and you will have a chance of a super version of the basic tennis shot. The type of shot available is denoted by the colour of the disc of light — with yellow denoting a lob or blue denoting a slice shot etc. You can still win a point with a well placed or timed “normal” shot, but the super versions make it much easier to do so, especially against the more difficult opponents. In the one-player game this works quite well and is especially enjoyable when after a successful smash, you get a nice slow-motion Mario Galaxy styled replay of your shot.

There are a few parallels to be made to Mario Kart; the Star or Mushroom cups etc. are certainly reminiscent, as are the division of characters into differing categories – with with likes of Bowser being a “Power” character and Mario being an “All-rounder”. When playing doubles, I found it best to partner with a Speed based character, such as Diddy Kong, as they steal less of the glory with winning shots and are less prone to errors that can be an annoyance. 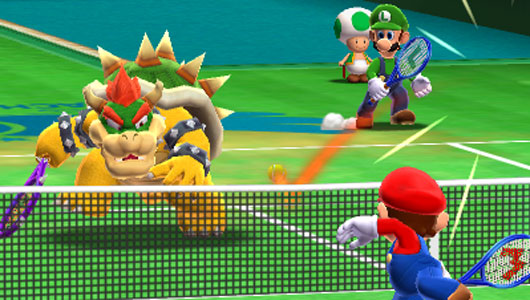 Where the power shot mechanic breaks down a little is in multiplayer, where it is less fun when you are on the receiving end. It can also be frustrating when some of the higher level AI opponents have a near psychic ability to know the direction in which some of the crazier bounces will travel, something that is virtually impossible for a human controlled character. Overall the difficulty of the opponents in single player bell-curves a little too much for my taste. It is a bit too easy to start with and you can get overly use to winning with any shot selection, especially if you default back to the slice shot. It also gets less enjoyable at the higher end of the competition and would have benefited from having spent a little more time in the middle difficulty area that is challenging, but enjoyable.

I would have normally praised the ability to turn off the gyroscopic controls, but I actually found them so useful that my only annoyance here was the inability to lock them on, as tilting the console into a less upright position will automatically turn them off. The only other issue I had was with the online multiplayer. I only had one disconnect due to lag, which was at least good enough to reward me with some of the points I might have won, extra nice as I was actually in a losing position at the time. However, I did notice a few other moments of lag in some of the other matches I played online. While a lot of the tie-break “casual” or two game “intense” matches exhibited no problems, any lag is a major problem in a game that is so heavily dependent on timing and positioning.

Enjoyable, flashy smashing shots
High level of polish and presentation
Plenty of reasons for replays and lots to do
Multiplayer and tougher AI opponents not as fun to play against
Any hint of online lag causes major issues with gameplay
Gyroscopic Controls turn themselves off if held “incorrectly”

None of the factors that detract from the enjoyment of the basic game are a massive problem though, and there are reasons to return for a number of different playthroughs. You will certainly want to play through to completion with at least two characters, as winning tournaments in doubles does not level up your partner character to Star status. The differing character types and selection of unlockable equipment also give more reasons to return. The overall score may be surprising given that I detailed a few complaints and even though I believe they were worth making you aware of, I went with this score as the basic gameplay and overall level of polish and presentation helps bring this score back up. It may be influenced by nostalgia for owning a Tennis game on a Nintendo handheld, but as this title was only lent to me for review, given that I intend to purchase a copy even after playing quite so much of it already is surely the best recommendation I can give.