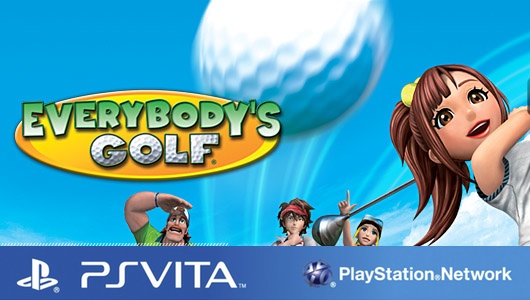 Golf.  Not usually considered one of the most exciting sports on the planet – but, ladies and gentlemen, Everybody’s Golf (also known as Hot Shots Golf in the US) is one of the top-selling Vita titles and one of my favourite games of the launch lineup.  Before you all start thinking that I’ve gone a bit soft in the head at the overabundance of brightly coloured sickly-sweet cuteness found in Everybody’s Golf, you’ll be pleased to hear that there’s a very solid, technical, customisable golf game at the heart of this game.

Everybody’s Golf on the Vita is the latest incarnation of this long-running series that’s been chugging along since 1997 on the original PlayStation, and bears a very close resemblance to the 2008 PS3 version of the game.  Everything you’ve come to expect from the series is very much present and correct in the Vita version: bright, colourful graphics, sickly sweet overtones, a large range of unlockable characters, and clubs and golf balls. Most importantly, ther’s a deceptively deep and technical golf game.

In many ways, I was glad to see that Clap Hanz have done very little faffing about with Everybody’s Golf on its journey over to the Vita. Unlike some of the other launch titles available, there’s hardly a whiff of unnecessary touchscreen controls being shoehorned in here (I’m looking at you, Uncharted) and, frankly, the game is all the better for it.

The core part of the game is the “Challenge” mode, in which you play a series of 9 or 18 hole tournaments with the ultimate aim of unlocking – and this feels odd typing this in a review for a golf game – what is essentially a boss fight.  Beating said “boss” allows you to progress to the next tournament and unlocks the boss character (as a playable character).

Now, I’d forgive you for thinking that this all sounds a bit linear and not that appealing.  But it isn’t.  One of the hallmarks of the Everybody’s Golf series is the vast quantity of unlocks that you can earn and, through those, the deep customisation of how your character looks and plays.  There’s not only characters and costumes to unlock, but also a number of clubs, balls, caddies and a series character-specific perks that become available if you are loyal to them (as in keep selecting them – sadly not a Mass Effect 2 style “go to this planet and rescue the hot alien chick by scoring a hole in one” affair).  The fact that the game gives you points for pulling off particularly good shots – and penalising you if you end up in a bunker or out of bounds – keeps the game engaging and very much encourages you to have “just one more go.”  The game really is a good fit for a handheld device as well, with a tournament taking around 10 minutes to complete – and that’s precisely the “pick up, play, put down” ethos that many handheld developers seem to have a habit of ignoring. 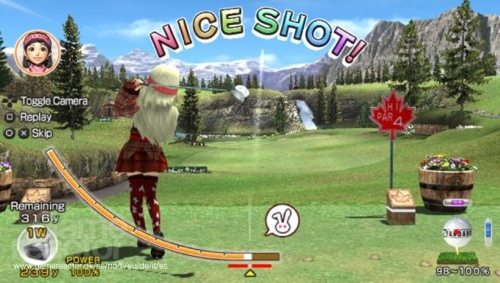 As mentioned earlier in the review, the cutesy presentation of Everybody’s Golf belies what is, in truth, a very technical and precise golf game; you really need to pay attention to the wind, lie of the ground, the spin you put on the ball and a number of other variables to pull off the perfect shot.  It’s all too easy to end up punting the ball in totally the wrong direction if you’re not paying attention – and a single slip-up can cost you an entire tournament.  Whilst this is arguably also the case with real golf, it can be moderately frustrating to see what was a good performance slip through your fingers at the final hole.

This is amplified by the very steep learning curve that the game chucks at you. After the first two or three tournaments, you really can’t afford anything more than a very minor error during the course of a tournament.  Sadly, the game does seem to employ some quite heavy-handed rubber-banding of the AI scores – presumably to keep the pressure on the player – but this means a small slip up can totally wreck an otherwise stellar performance in a tournament.

In addition to the single-player modes, there’s also some multiplayer fun to be had in Everybody’s Golf as well.  As with the PS3 version of the game, the main chunk of the multiplayer is dealt with via lobbies that you join.  Now, this being Everybody’s Golf, the lobbies aren’t dry text-based affairs.  Instead, you get a fully customisable super-deformed avatar to run around a series of rooms with.  The point-earning and unlock system carries over to the multiplayer too, meaning that you can use all the awesome goodies that you earn in the single-player game to smite (in a cute and loveable way) your opponents. 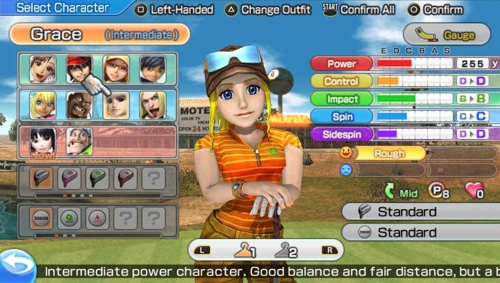 My only real gripe is that the lobby-based multiplayer matches are scheduled affairs, with players needing to sign up to tournaments that start at a specific time. Admittedly they start fairly frequently (every 10 minutes or so), but this can be a little frustrating if you just want to jump into a quick match.

Thankfully, for the more impatient amongst us, there’s also daily international tournaments that you can jump straight into – and this might actually be the feature that gives the game some serious long-term appeal for many gamers.  Every day sees a new tournament (with a potentially new set of rules, perks and limitations) served up to everyone who has a Vita and a connection to the internet; you get one attempt to do as well as you can, after which your score gets posted on the daily leaderboard.

All in all, Everybody’s Golf is an excellent fit for the Vita.  It looks great, the style of gameplay is suited perfectly to a portable gaming device, and the core game manages to be fun and accessible despite being surprisingly challenging and intricate.  It’s a game that’s likely to be overlooked by many – but if you can delve beneath the sweet, sugary coating, you’ll find a truly excellent game underneath that will keep you coming back for more again and again.

Accessible, deep gameplay
Perfect fit for a portable gaming device like the Vita
A vast number of unlocks and character customisations
The sugar-coated cuteness may put some gamers off
A surprisingly steep and unforgiving learning curve in the single player modes
It can be tedious waiting around for a multiplayer tournament to start
Official site – Everybody’s Golf
Sony Computer Entertainment Europe provided a review copy of the game.