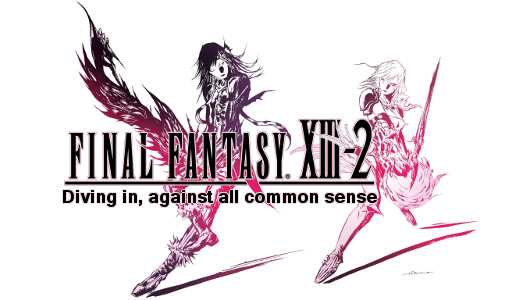 As a long time lover of the Final Fantasy franchise, the 13th in the series was somewhat of an oddball to me. Even though I found it painfully boring in the six or so hours I played, I could see why so many people enjoyed it: the characters were more lifelike than ever, the combat was fast, furious, and oh-so-flashy, and the story seemed like it was going somewhere. Somewhere crazy, perhaps, but even at the end of Final Fantasy VIII (my favorite in the series,) you were fighting a crazy time witch in her castle in the future.

Crazy is where the bar has been set.

To be honest, I’m not even entirely sure what my main problem with XIII was. Up until now, I had always blamed it on the combat. Sure, it was fast and looked cool, but all I was doing was hitting Auto-Attack and shifting Paradigms now and then. However, now that I’m neck deep in XIII-2, I can safely say that the combat is actually pretty darn fun, though it doesn’t seem to have changed much from what I played of the original. I’m still auto-attacking and paradigm-shifting all over the place, yet it feels good. Heck, even the , sorry, “Cinematic Actions” don’t bother me as much as I thought they would. They’re still annoying and I think games would be better without them, but I’ve seen them done worse.

So what was the problem, then? I don’t think it was the characters. Besides wittle crybaby Hope (seriously, just talk to the dude about your mom, that’s ALL IT WOULD TAKE,) I thought they were all alright. Snow was a little too full of bravado and Lightning was a little moody, but hey, I came into Final Fantasy expecting some of that. I also can’t lay blame on the story, because I was expecting it to be thick from the get-go and crazy. The linearity of it all didn’t put me off either like it did for some people.

Looking back, I think it was the ramp up. There was a slow, methodical pace to the way Final Fantasy XIII laid out both its story and mechanics that didn’t put me off, persay, it just slowly pushed me away. I also think the next game I purchased might have had something to do with it, which was Just Cause 2. Talk about two polar opposite games. In one, it took over 6 hours to ramp up, and in the other you’re jumping out of helicopters and blowing everything up within 20 minutes. Man, that was a heck of a game, but I digress.

Now, the big question is: If I got so bored of Final Fantasy XIII, why would I want to try its direct sequel? Well, the answer there is pretty simple; I absolutely love the Japanese RPG. From the turn-based combat to the absolutely bananas stories, I just can’t get enough of the genre. I can see how many people could find the combat boring or the stories cliché, but that’s what keeps me coming back for more. I also find it fascinating to see how developers tweak and change the classic formula in modern JRPGs. XIII added in the Paradigm Shift that sped up the classic system, and XII-2 built on top of that by adding a Pokèmon-esque mechanic in.

So far I’ve only put about eight or so hours into XIII-2, and I want to put in a LOT more. My current playtime is at 5 hours, but I restarted after about 3 hours because I completely screwed up my Crystarium (the level up system) by trying to spread out my points to the different classes (plus I’m a little neurotic like that.) I can safely say now that a good strategy there is to focus on just one or two classes for the early game. Keeping Serah in the Ravager tree and Noel in the Commando tree and only recently branching out into the Medic and Synergist trees respectively has been very good to me. Reading back through that, it looks like a bunch of gibberish. I didn’t even go into my level 25 Cait Sith or level 22 Zwerg Scandroid.

Or my level 22 Chocobo with another, tiny Chocobo riding on its back. 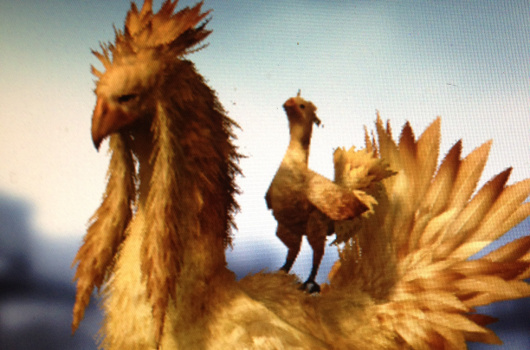 I think that picture pretty much sums up why I’m enjoying my time in Final Fantasy XIII-2 so much. While a lot of it has the same serious nature as the original 13, it’s also not afraid to have a little bit of ridiculous fun. Besides the adornment system (see: above) where you can put hats or Chocobos on your monsters, there’s also a Live Trigger system where you’re asked to make one of four decisions in a conversation. Many of these conversations have one or two “Funny Answers,” where if you use enough of those in a chapter, you get another silly adornment for your monsters. The funny answers usually involve asking your Moogle for advice, and him just saying something random only slightly pertaining to the actual question. It’s good for a chuckle, and might take some people out of the experience, but I enjoy my games with a little bit of camp in them.

While I’m only eight hours in and therefore unable to give a definitive verdict on XIII-2, I’m really enjoying my time with it and I’m actually excited to get back in – which is something I could never say for XIII. I want to dive back in, see more monsters, see where the next time gate takes me, and find out exactly where the story is headed. If you’re like myself and got bored of XIII’s story, but saw potential in the combat, there may be something for you in XIII-2.