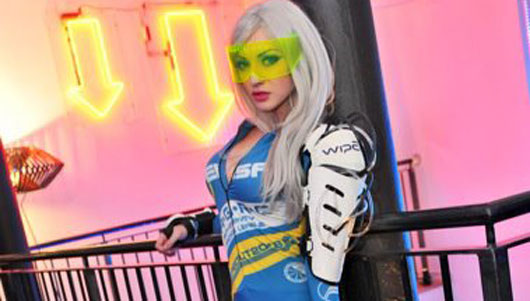 Last Monday, I was invited to join a gaggle of Glaswegian gamers for an also-alliterated smorgasbord of sweet Sony succulence. As I type, the PlayStation Vita Rooms “shop” is still open in Sauchiehall Street in the city centre; Monday night saw a launch party being held, invites dished out to gamers applying through Facebook. The prize for the chosen few? Two and a half hours with Sony’s new handheld baby, a couple of free beers, floppy Yorkshire puddings and leering glares at a curvaceous lady named Ami.

Three things were on many a mind inside the dingy, two-storey outlet, 20 feet wide and about 5 times as long with an industrial iron staircase in the middle leading up to the top floor. Those three things were: queuing for Uncharted: Golden Abyss, giving up after seeing the line itself, and ogling Ami.

Frequently seen at many PlayStation events, Ami is a hardcore WipEout fan best known for cosplaying as a pilot from the game in a flightsuit loosely described as “skintight.” She is, to the famished legions of oft-masculine gamers you see at these events, milk and honey; all flesh and cleavage, knowing smirk and mind-boggling-stretched fabric.

The concept of attractive ladies at these events isn’t foreign or even moderately brand new. E3, the Electronic Gaming Expo event held annually in Los Angeles, is infamous for the damn Things – Things being an entirely objective term, given that the people these women are usually subjected to usually find themselves closer related to the Neanderthals than the average Joe Bloggs.

Standing anywhere on the second floor where Ami remained the whole night, it was easy to spot at least one glaring pair of eyes, curious pupils peeing out of the corners of cautious sockets, lest they catch the attention of the WipEout Girl – a giveaway turn of head, a tilt of the neck to inspect things from a better angle, and the odd flick of the eyes southwards when they were lucky enough to get so close.

Sitting on a beanbag across the room from where she stood, having a try of Golden Abyss, I overheard two typical men of the evening who were talking, very pointedly, about Ami. It summed up exactly why this piece of writing exists, and why the world of gaming still finds itself somewhere far more backwards than it would care to be.

“I don’t know about you, mate,” drawled one to the other, “but she’s cruising for a bruising.”

Ami even offered, as the evening progressed, to challenge prospective Vita owners – or ‘suitors’, as I’m sure they’d have been convinced – to a race on WipEout using the game’s cross-console multiplayer mode. She offered gentle, placid handshakes and smiling eyes hidden behind a yellow visor, teasing velcro gloves from around her hands to hold the controller – not that many were paying attention to the visor or the gloves. As you might expect, nobody triumphed against her – but this is not to say that she hasn’t earned the right to wear the suit, as she’s a damn good pilot.

After the party, I expressed my gentle apologies to her on Twitter on behalf of a gaggle of people who were, so it seems, essentially inexcusable. Her photo, snapped by PlayStation Access’ Facebook team, has received the most likes of any photo in the album – this, from an event at which we were supposed to be excited about a games console. The comments were as you’d expect: “Must come with the collector’s edition!!!” and, more worryingly, one comment by a user with no photo (of course) asking if there was “any chance to rent this girl”.

Ami replied sometime later, saying that there was no problem. Maybe my wording hadn’t been clear enough, perhaps saying Glasgow was just “uncivil” was to do my intentions a disservice. Or maybe she’s just used to it – being gawped at, stared at; empowering herself by having lecherous, drooling, misogynous gamers leap at any opportunity to gaze at her prestigious cleavage. Whatever it was, the Vita wasn’t the biggest thing to blow my mind that evening. It should have been, but it played second fiddle to the attitude of nearly every male gamer there, who saw it their duty to get as best a look at her backside as they could manage.