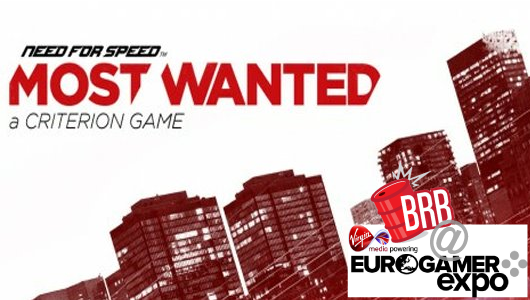 Preview: Need for Speed: Most Wanted

When Criterion Games say they’re making a new racing game, people listen. And when the term “It’s like Burnout Paradise” gets thrown around, people listen intently. Need for Speed: Most Wanted is a throwback to the original 2005 game, spruced up with an updated Autolog feature that’s now fully integrated  into the game world rather than languishing solely in the menu. Of course, one of the biggest changes to Most Wanted from almost all other racing games is the ability to drive any car in the game from the start. Well, providing you can find it somewhere hidden in Fairhaven City, that is.

At Eurogamer Expo, both a portion of the singleplayer game and a smattering of the events from the multiplayer mode were present and correct on the show floor. Multiplayer offered a best of three contest between four drivers, featuring a speed trap contest, a standard race and a vehicular long jump contest that charges you with jumping through one of the many billboards – plastered with a picture of your foes – dotted around the cityscape of Most Wanted.

As with Burnout Paradise, your first task is getting to the meet up point, which introduces you to the open world of Most Wanted’s multiplayer. The meet up point is clearly marked on your mini-map with the most direct route detailed for you. You’ll get extra Speed Points — the in-game experience points that boost you up the most wanted list — if you arrive at the meet up first, so just getting there in the first place becomes a heated race. But then, you’re also going to want to find your own path off the beaten track; smashing security gates, getting huge air and running speed cameras will all increase your Speed Points, so worth considering if you want some extra bragging rights. 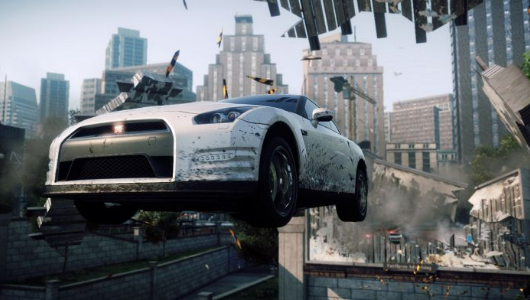 The speedtrap contest gives all drivers a couple of minutes to record the highest speed through a specified speed camera. It’s a completely open challenge with no limitations on how you get that speed or how you can stop others from beating your record. You could take huge runs up to the camera and nitro boost when you get close for the best speed, only to have that effort ruined when the person to beat rams into you head first.

The race on show in the demo was your standard ‘get from point A to point B’ affair. That being said, you’re positively encouraged to be as creative as possible with how you get between said points – the streets aren’t barricaded off in order to keep you on a set track, so as long as you pass through the checkpoints and reach the finish line first, there’s no reason not to take another road to find a shortcut; another wonderful benefit of placing Most Wanted in a completely open world.

The last event involved jumping over an intersection, with the longest jump taking the win. It proved a little more tricky than the speed trap, as four cars constantly trying to gain speed to make the jump from either end would usually end with someone hitting something – and that something is usually another player – head on. The multiplayer session finished up with a quick tally on who got the most points in total, according to their performance in each of the individual events, and the crowning of the overall winner.

The singleplayer portion saw a bunch of drivers gathering for a large race, which the Fairhaven City PD tried to stop half way through with a blockade of police cars, chasing the drivers through the rest of the race and onwards. It’s definitely a reboot of the 2005 title of the same name, but heavily improved upon. The cars look sleek and shiny when new, but quickly start showing the damage when you get into myriad inevitable scrapes on the Fairhaven City streets.

Need for Speed: Most Wanted is a great mix of arcade racer and a simulation-like racing experience – and manages to sit comfortably in the middle of these two extremes as a fun racer with some impressive features.