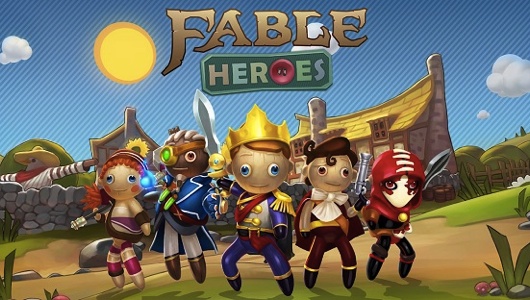 The Fable series holds a special place in many gamers’ hearts; a large part of why the series is so well-loved is the irreverent, well-written and lighthearted approach it takes to the generally overly serious RPG genre. Fable Heroes, however, is a complete departure from the series norm, replacing RPG stylings with some cutesy side-scrolling hack and slash action. So has Lionhead’s brave design decision paid off?

When I first heard about Fable Heroes, I must admit that I was a bit flummoxed as to why Lionhead were making such a game in the first place. Whilst the Fable series has always been visually arresting, sickly-sweet cutesy graphics have never really featured in the artistic repertoire of any of the games; furthermore, whist I’d never describe any of the Fable games as particularly gritty, hard-hitting and mature RPGs, I most certainly wouldn’t describe any of them as family-orientated. So, for reasons presumably best known to Lionhead, we’ve all been served up Fable Heroes – a game that isn’t an RPG, is overtly cutesy and bends over backwards to be family-friendly. In fact, the game is so sickly sweet from a design standpoint that I am concerned that my console may end up as an Xbox Twee-60 (wakka-wakka!).

Fable Heroes, unsurprisingly, is set in Albion and sees you traversing through cutesy versions of the environs from previous Fable games. To the game’s credit, these reimaginings of the various locations are fairly well done and manage to pick and choose some of the most iconic settings from the Fable series. The various stages are also appropriately populated with the evil waifs and strays from the series, from Balverines to Hollow Men. The characters that you get to pick from – of which there’s a starting line-up of 4, with more to unlock – are all familiar(ish) faces from Fable III, and include the Hero (duh), Reaver, Lucien and Hammer to name but a few. But, for some reason, each one is a doll-like, super-deformed representation of the character it’s meant to represent – and, unlike the full-fledged Fable games, there’s no functionality for any meaningful visual customisation of each character. Each character seems to squarely fall into either a melee class or a ranged combat class; however, since there’s so little variation between the characters within each class, you’ll find yourself quickly coming to the conclusion that you can’t really be bothered to grind away to unlock more since, frankly, they’ll be no different than the ones that you already have access to.

The gameplay in Fable Heroes is particularly uninspiring, with the layout of each level essentially boiling down to “mash ‘x’ (or occasionally ‘y’), keep the stick pressed over to the right and then mash ‘x’ (or occasionally ‘y’) until the unmoving boss eventually succumbs to the seemingly ineffectual attacks that you’re throwing at it.” Whilst you do get a choice at the end of each level as to whether you want to face a boss or “enjoy” a button-mashing mini-game, there’s such little variety in how the levels play out that the whole experience becomes tedious very quickly. Honestly, I don’t think I’ve played anything that’s so utterly formulaic. The brightly coloured and well-designed visuals do help lift the air of tedium a little, but aren’t enough to convince you that the levels are little else than carbon copies of one another from a gameplay point of view.

The lack of variety in the levels really helps to shine a spotlight on another major shortcoming of the game: character control. Moving around very much feels like you’re wading through treacle, with movement being plodding at best and attacks seeming to take an age to translate from pushing the button on your controller to anything meaningful happening on screen. Admittedly, it does get a little better as you unlock perks for your characters with the shiny coins dropped by dead enemies, but it is done in a rather bizarre way. Unlocking stuff is achieved by a Monopoly-esque mini game, in which you roll a dice at the end of every level and buy whatever is on offer on the square that you land on. However, I honestly doubt that anyone would have the necessary fortitude to keep plugging away at the game to get their hands on the unlocks that may make the game somewhat less turgid to play.

That’s not to say that there isn’t any potential in this game. I could see the 4-player co-op game being fun for a group of young kids. If you can’t convince another 3 people to actually play Fable Heroes with you (either locally or over XBL), the AI takes control of the remaining characters. In all fairness, the AI does seem to do a fair job of emulating the general personality traits of the average XBL denizen and happily steals the vast majority of coins and pickups dropped by dead enemies.

The design of the game is very kid-friendly; much like New Super Mario Bros. on the Wii, characters don’t ‘die’ during the game. If you run out of health you become a ghost and can still dole out damage to enemies – but are unable to pick up items until you collect a health heart. There are also some mildly interesting risk-reward aspects to the gameplay, with each character having a super attack that chews up one of your five life hearts and item chests that can contain both beneficial and useless items. For the truly masochistic, there’s also a ‘dark Albion’ – essentially a harder version of the game with moody lighting – that becomes available once you’ve beaten all the levels.

Whilst playing the game, I couldn’t help shake the feeling that Lionhead had decided that it wanted a bit of the Castle Crashers love thrown its way. Sadly, the off-beat humour of Castle Crashers is nowhere to be found, nor is the witty (and admittedly very British) sense of humour that one associates with the Fable series. What you’re left with is a hack ‘n’ slash game that doesn’t know what it wants to be or who it wants to appeal to, has flat and uninspiring gameplay and seems to be nothing more than an attempt to cash in on the Fable name whilst fans are waiting for the next installment of the series.