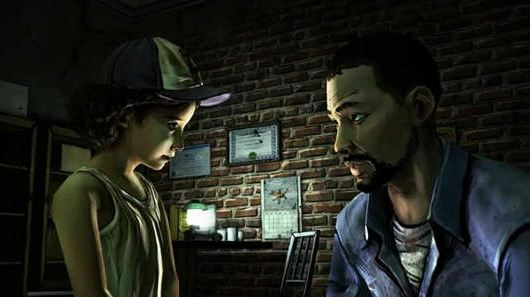 Robert Kirkman’s cult comic series The Walking Dead has been on the rise over the past few years. The comic itself has continued to grow far beyond anyone’s expectations, and with the advent of AMC’s TV adaptation the brand has become a worldwide phenomenon. It came of little surprise, then, that a game was to be designed based on the property. And with Telltale Games announced to be at the helm, fans of the franchise could rest — reasonably assured — that this would not be another action-oriented, narrative-light zombie game.

The Walking Dead is, in fact, quite the opposite. In this first of a planned five monthly episodes, you play as Lee Everett. Lee has been arrested by the authorities for reasons unrelated to the pending outbreak, and is transferred out of Atlanta when things quickly, and somewhat out of nowhere, go very awry.

I say “out of nowhere,” not because I didn’t know what was inevitably coming, but because when said event occurs it follows an incredibly engaging introduction to the way the game handles narrative. Not unlike 2010’s less-than-stellar Alpha Protocol, The Walking Dead utilises a multiple choice conversation system that is mostly — but not always — timed. There’s something very enthralling about being placed in a situation in which you only have a few seconds to decide how you’re going to react, and the game is directed so well that the tension always feels real – especially when you consider that a significant number of these conversations directly impact future situations.

Sometimes you’ll make a choice in a second’s thought, reacting almost in a primal way to the scenario playing out in front of you. That decision could cost lives. Certain characters could end up dying as a result of what you’ve done, and survivors could decide at that moment whether they will like or loath you. Any one of these scenarios can play out in multiple ways, and the great writing throughout makes it all believable as canon, no matter what decision was made.

One thing the comic and TV show have always done well is lull the audience into a false sense of calm, implying that things are almost back to normal in a world inhabited primarily by active corpses, and then suddenly reminding us that there is never a time that anything is truly normal. The threat of death, and the emotional backlash of the characters’ realisation of what is going on, is constantly played upon, and Telltale’s story is no different. There are heart-wrenching scenes that occur completely out of the blue and choices that must be made instantly that will affect every character going forward. It is made clear very early on that at no point should you ever feel safe: this is not a safe world, and no amount of hope will change that. 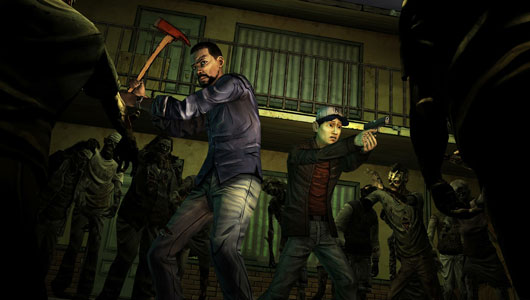 Telltale dig deep into human emotion in this game, and like the other mediums of the property, are not afraid to be gruesome in driving that point home. It’s truly telling that when given an opportunity to work reasonably unrestricted, and with a top notch writing team at the helm, Telltale can crank out one of the most enthralling game experiences I’ve had in a while. The gameplay may be simplistic, even when compared to the studio’s previous titles, but that’s not what you come to The Walking Dead for.

The Walking Dead is about loss; it’s a human story that invokes one’s deepest emotional reactions to bloom out of what is — on paper — an incredibly silly concept. But it works. Overseen by screenwriter, avid gamer and friend of Kirkman himself Gary Whitta, the writing is what drives this game home,and Telltale fully prove that whilst they may never create a compelling action game, their ability to mould an interactive story is what they do best, and that is no more evident than in this latest release.

The gameplay itself is simplistic, and more-so than previous Telltale games. Gone are the days of mindlessly clicking around the screen to see what objects can be interacted with. Every interactive object now has a very clear marker on screen, and the player’s cursor will indicate precisely what actions are available. Character movement remains much the same as previous games, i.e. minimal, but that’s really for the best given that the stages are concisely designed. This overall simplicity in terms of gameplay mechanics is a welcome decision. It allows for much less faffing around and much more opportunity to get engrossed with the setting and its characters.

The Walking Dead is Telltale’s greatest achievement to date. Their previous titles have had issues, not always playing to one particular strength, but it is very clear from the outset in Episode 1 that this time the focus was the writing, and the player’s ability to play out their own, personal version of the story. It’s only a couple of hours worth of content, but I for one will be more than happy to sink more time into those future episodes. Of course, there is the issue of each episode being written by different people, but that’s what Gary Whitta was brought on board for; to ensure every script holds up to Kirkman’s standard. After playing through Episode 1, I have nothing but faith in this series’ potential.