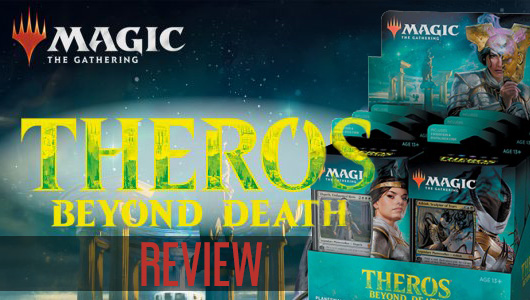 Theros Beyond Death is the latest expansion offering for Magic the Gathering featuring creatures and spells pulled right from Greek and Roman mythology. I got to spend a day on Arena opening packs, drafting decks and discovering the new mechanics and gameplay. The result is a fun and complex addition to the Magic the Gathering universe which will excite fans but may prove too complex for beginners.

The biggest thing that fans of MtG will notice is a new mechanic called Escape. Escape allows players to rescue their cards from the graveyard, usually for a higher mana cost and the requirement to exile other cards from their graveyard. Now we know where the Beyond Death part comes into it all. Saga and constellation return in this expansion leading to opportunities to build huge stacking bonuses and frustrate your opponents. It also adds to the flavour of it all as if destiny and gods are actively influencing your game.

Each colour has its own gods and demi-gods and your devotion to that colour can have major effects on them. There are a lot of effects to juggle so playing on Arena where they automatically resolve had the result of streamlining my play, but also had me shouting at my screen more than once; an effect would resolve that I had completely forgotten about because I was thinking about five other ones. For this reason I would definitely steer beginners of MtG to get other mechanics under their belts before tackling Theros Beyond Death.

I was also glad to be playing online because Theros Beyond Death looooooves using tokens. If you plan to play with physical cards when it releases later this month, I would definitely recommend a big bag of tokens. There are quite a few creature tokens as well as enchantment and constellation effects. When playing, I did not have a satisfying resolution to a saga card, which was frustrating. I know from past MtG gameplay that I may have just had a streak of bad luck to not see it on my side or on my opponent’s side, but it would have been nice to experience.

The Beyond Death world, with a variety of creature groups and spells is beautifully harmonious. I did not play all colours, but examining the card list builds a great picture of how decks can combat each other in a way that fits the story created by the flavour text on all of the cards. The artwork is gorgeous and really pulls you into its world.


Overall, I truly enjoyed my experience with Theros Beyond Death. There is lots of fun playing with the classic tropes of mythology reworking gorgons, satyrs, centaurs, Cerebus, and the whole pantheon of gods and creatures into Theros. The opportunities to exploit the mechanics or be absolutely destroyed by them is part of the reason I love MtG, so it is exciting to see newness being added to the fold with this expansion.

Theros Beyond Death is available on Magic the Gathering Arena and will be having an in-store release on 24 January 2020.

Review copy provided by Wizards of the Coast
Official Website

1 Posts in Total See Them »