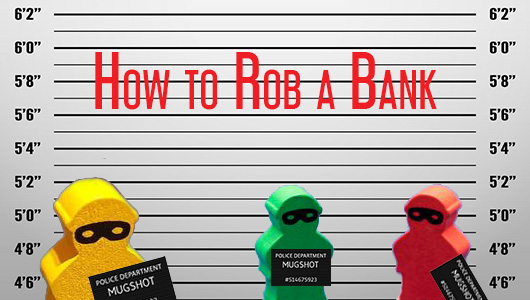 Review: How to Rob a Bank

The Heist
Now, everybody just remain calm and we’ll hopefully get through this review without any “heroes” trying to save the day and getting someone hurt in the process. We are only here for the money, so if you just stay where you are, we’ll get this done as quickly and painlessly as possible. Now any questions?

No, there will be no bathroom breaks — this is a quick in’n’out job, the whole heist should last no longer than 30 minutes. Now to business…

The Police Press Conference
As we can clearly see from these crime scene photos, a gang of up to three armed robbers entered the bank at approximately noon. They then proceeded to make their way around the bank, collecting loot while avoiding (or in some circumstances incapacitating) the bank’s security guards. They also seemed to co-ordinate with a fourth (possibly non-playable) character acting as their getaway driver who was also responsible for collecting the money.

The “players” inside the bank made use of a card programming mechanic that we have seen used in a spate of similar incidents aboard the Colt Express – we do not believe these robberies are linked in any other way and the gangs’ Modus Operandi has some key variations.

In this case, each “player”, starting with the bank, takes it in turn to lay down five cards each. Some provide movement, others allow you to pick up or unlock bags of cash and others allow you to incapacitate a foe. Only when all five cards have been placed by all players, do you start to resolve any of the cards – meaning that all players will need to keep track of and remember everyone else’s moves. Gang members can co-ordinate their efforts, while the banker’s moves can be split among the available guards. Played cards will be eliminated for the rest of the game and the limited number of cards mean all cards will be used by the end of the third round, unless the gang makes off with the required quantity of loot early.

The Crime Scene
The 3D nature of the board and blueprint design really nails the “planning-a-bank-robbery” style presentation — with part of the game’s box cleverly repurposed as the base structure of the bank. The bank floor tiles are randomly shuffled so no two games or even two rounds play out the same, especially given the variation in available cards. There is a tile to swap in for a four player variant but it would have been nice to also have a few more general tiles for further game-to-game options.

The Case for the Defense
While primarily aimed at the children and family market, it is also well placed as a quick palate cleanser between bigger games and has gone down well with the crowd at our Tabletop Tuesday events (once again adding weight to my theory that the best kids’ games make for the best drunk people games!) Strategically it is a bit simple to stand up to too many repeat plays for (sober) adult gamers but is an attractive novelty that can easily be enjoyed with more casual gamers or a generally diverse group of gamers of all ages of level of abilities.

Fun, interesting 3D board design
A fun, family game with some strategy
Good quality components
Programming mechanic can be awkward for new players
Could do with greater variability from one game to another

Cross-Examination
If players are unfamiliar with the programming mechanic it takes most people a round or two to get to grips with it but aside from that it is relatively easy to learn and/or teach.

It is a bit more limited as a two player game. Simply as there are less options to mix things up without various players taking on the role of banker – but it also makes it slightly harder for the banker as it is easier for the two robbers to coordinate and the banker loses the benefit of overhearing any plans discussed among players.

In summary judgement: the court finds a decent game with possible time off any sentence for good gaming. For not buying this game, I find you guilty of robbing yourself of a good time.

Tags: How to Rob a Bank, Jumbo, Propero Hall