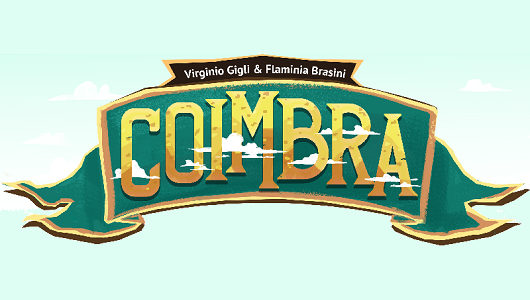 Once upon a time, Portugal was the most exciting place in Europe. Portuguese explorers were finding new trade routes east to Asia, west to the Americas, and around the whole world. Wealth and power flowed together. The city of Coimbra was the cultural jewel in this golden age, with its decorated monasteries and thriving university, backed by the patronage of the royal family. Coimbra puts you in the middle of this renaissance of culture, wealth, power and religion, and lets you pick your path to glory. Will you gain influence with merchant nobles, and capitalise on their great wealth? Or will you become a patron of academia? Perhaps you will complete a lengthy pilgrimage to the holiest sites of the country or curry political favour. Likely, you will do many of these things in your scramble for victory in Coimbra. Outdoing your rivals will require balancing long and short-term plans, striking a balance between blocking your competitors and advancing your own agenda, and always being willing to reconsider your strategy at every turn.

• Designer: Flaminia Brasini and Virginio Gigli
• Publisher: Eggertspiele
• Number of Players: 2-4
• Playing Time: 60-90 minutes on the box, 90+ in my experience

Game-play in Coimbra consists of four long turns, each divided into a sequence of rounds. The first round consists of recruiting characters to your side. Each comes with a degree of influence in one of the four major areas: politics, commerce, religion, and academia. In addition, they have unique bonuses, some of which trigger immediately, some on every turn, and some at the end of the game. There are a wide variety of interesting effects on the cards, including free resources, re-scoring mechanics, future discounts, taxes on other players, buying discarded characters, and many more. Figuring out which of these characters plays well with your existing strategy is one of the major challenges of the game. Characters may also come with diplomas, a colour-coded set-based bonus like science in Seven Wonders.

In order to recruit these characters, players take turns drafting dice, which are rolled at the beginning of each round. High numbered dice give you access to earlier picks, but also cost more resources. Low-numbered dice are cheap, but mean you pick later, or perhaps not at all. The nobles are arranged in three tracks of four, and players take turns placing their drafted dice on those tracks, to determine who gets to pick from which track and in what order.

For those who are short on resources, or who want bonuses, there is also the option to place one’s dice at the King’s castle, where dice are valued in reverse order (lower dice go earlier) and do not cost any resources. These dice can be used to try and change the turn order, get a one-time hoard of money or guards, get discounts on valuable expeditions, or change the value of one of your other played dice.

Money and guards are the game’s two currencies, roughly equal, but not interchangeable. About half of what you can buy is denominated in one, and half in the other. Having only one or the other means narrowing your tactical possibilities. Keeping a healthy store of both is difficult when there are valuable options on the board, and other players can outbid if they’re willing to spend the resources.

However, dice do not only have number, but colour. There are thirteen dice, with three corresponding to each type of influence, and one wild. Each drafted die is exchanged for the type of resources represented by its colour: guards for grey, gold for yellow, pilgrimage steps for purple, and victory points for green. Once these have been accumulated, players get a chance to invest in one of six lucrative voyages overseas. These are expensive but confer large endgame bonuses based on different criteria for each voyage.

The more influence you have in a given track, the greater the reward, encouraging specialisation. Players also score at the end of the game based on their ranking on each track, providing an extra incentive. However, there are limits. Players can only store so much money or so many guards and so taking multiple grey or yellow dice while at high influence can lead to wasteful excess. Focusing on green or purple dice can create shortages of guards or money in future rounds. Diversification avoids those problems and helps create opportunities, but at the cost of individually weaker plays.

Religion is another way to win glory, which is modelled as a pilgrimage around the monasteries of Portugal. The more religious influence you have, the faster you can make your journey. Each monastery visited confers a bonus, and players can plan their course to target the ones they want most. There is an inner loop of eight low-value monasteries with small bonuses, four second-tier ones that are further off the beaten track, and two third-tier monasteries that are a considerable distance away. Players with little religious influence might target a single goal to compliment their other strategies, whereas players with enormous influence can take a grand tour and snag most, though probably not all, the bonuses.

Does this all sound like a lot of moving parts? It is – but it works. A lesser game would be drowning in this many different components, phases, tracks, rules and mechanics. But here, it all comes together gracefully. Even first-time players can pick up the game after a turn or two. Several key design decisions mitigate the worst problems: players’ attention is focused on immediate decisions; there’s almost always something rewarding to do, even if you can’t find the optimal move; and the pieces of the game all mesh together nicely, with all the mechanics feeding back into the bigger picture.

The theme of Coimbra is strong, with its historical setting being a nice skin. The mechanics don’t quite reflect on the theme in a way that reveals something profound, but only the very best games manage that level of theme/mechanical interaction. The different tracks correspond to the preoccupations of 15th century Portuguese culture, and it feels historical without getting bogged down in irrelevant details.

The art is consistent, attractive, and unified, with a muted teal-and-tan base contrasting with the bolder mechanical colours. The game is almost colour-blind friendly, except for the unfortunate decision to make grey one of the fundamental colours, since it can be confused for both green and purple. Visual design in Coimbra does a lot of work that would otherwise require rule memorisation. There are clear associations between the aesthetic choices and the mechanics. The four colours dominate the visual theme and make the role of most cards immediately apparent. Cards have well-defined symbols that provide a clear shorthand for the rules. The rule book explains the functioning of each card, but this is typically unnecessary. Overall, Coimbra is surprisingly nice to look at for a game with this much complexity.

Coimbra clocks in at just over two hours for a four-player game, at least the first few times you play. The pacing is about as good as you could expect from a sequential strategy game, but it still suffers from the analysis paralysis problem, especially while you’re still learning. This can be a problem if you have highly competitive players looking to block or counter their opponents’ players. Because of the heavily interconnected mechanics, outcomes can be a bit mysterious, and it is not always clear who your rival is from the board state. In one game, I went from a mere nineteen points coming into the final turn to well over two hundred once all the points were tallied up. It is possible, but not practical, to take all this into consideration.

Easy to learn for a complex game
Multiple paths to victory create interesting tactical decisions
Colourful, clear visual style compliments the historical theme
Getting to be a substantial time commitment
Too much information can lead to pacing issues

I recommend Coimbra for anyone looking for a game in this middle-to-high complexity Eurogame category. It’s a solid step up from something like Lords of Waterdeep or Seven Wonders, but that doesn’t quite have the density (or duration) of an Uwe Rosenberg game. Its depth and complexity are tasty, but the rules are simple enough. Its ease of learning makes it an excellent introduction to heavier-weight gaming, without most of the intimidation and confusion that frequently comes with those games.