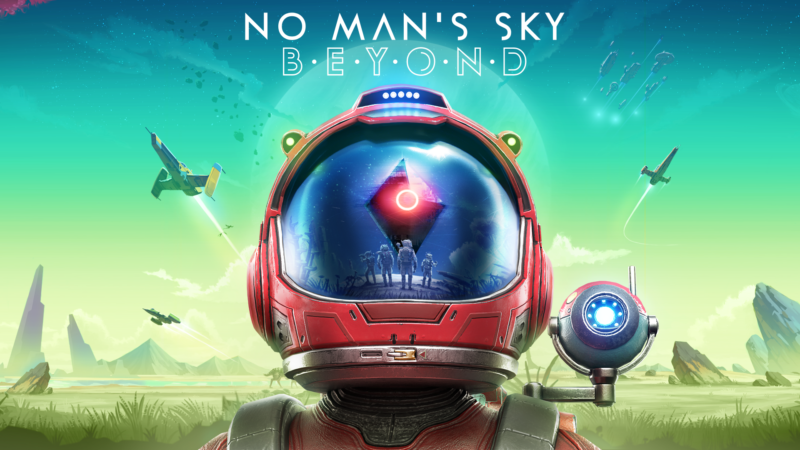 The Redemption of No Man’s Sky

It was June 2014; my daughter was only 3 months old and during those sleep deprived days, I happened to be awake at the early hours to watch the Sony E3 Press Conference. Lo and behold, Sony revealed a game that instantly pulled me in; No Man’s Sky, a game that had everything I would ever look for- space, spaceships, discovery, planets, aliens, basically just disgustingly hardcore science fiction.

The promise was too good to be true but with the new generation of consoles hitting their stride, I had full confidence that this would become a reality, discovering huge dinosaur like aliens on distant planets, dog fights in space, traversing star systems to see who I bump into along the way.

The creator and public face of the game Sean Murray was doing the rounds on gaming sites, YouTube and even American late night chat shows. It was all real. It was all happening, my perfect game.

Two years passed and the game was close to launch. I had joined the subreddit and we had been hyping ourselves up for the release for months. Sean Murray had done his final publicity rounds and although delayed by a month, I was ready, taking time off work and even pre-ordering the game via the PlayStation Network store (which I have never done before) just so I can preload and have it ready to go at midnight.

At 12am on 12th August 2016, I loaded up the game, snacks ready, drinks ready, phone fully charged in order to send live updates to friends (whether they wanted them or not) who didn’t get the game straight away. I found myself on a crashed moon and the adventure began, I had to gather items to fix my broken ship so I can get off the rock I was on and start my journey. It was magical and I was hooked. Flying off planet and into space just like the trailers I watched a million times felt amazing and landing on my first planet and discovering ALIEN ANIMALS! What a rush! What a magnificently nerdy rush! This was it, I had found the game of all games and I wouldn’t need anything else ever again.

Three days later, it all came crumbling down. You see, the aim of No Mans Sky was to get to the centre of the galaxy. I chose not to do that straight away and went down the route of discovery and slowly making my way there. Some players went straight for the centre and had managed to get there very quickly. On this third day of play, I realised that landing on planets, going to space stations and then landing on more planets was becoming very laborious and boring. Everything seemed to be the same except with a different Instagram filter and the animals were just cut and paste versions of the same body parts. I hadn’t seen a single player on my travels even though apparently I was in a star system at the same time as another player. I had put A LOT of hours in and so far, no alien dinosaurs, no lush planets, no player interaction and no incentive to carry on playing.

On Twitter, I started seeing people send abuse to Sean Murray after he mentioned something about more players online than they expected to explain why two players could not see each other at the same location. It quickly became apparent that all those features Sean mentioned during his TV circuit were missing. You couldn’t see or interact with other players. Dinosaurs weren’t anywhere near the kind you saw in the trailers and the “battles” were absolutely abysmal compared to the trailers.

I felt disappointed that none of these were at launch but I couldn’t get mad. I did enjoy what I did play of the game but felt I had enough. I started to see the abuse for Sean and Hello Games become quiet nasty online and decided that was enough for me and moved on to other games. I did check in on No Mans Sky every now and then but nothing was happening and Hello Games fell silent so I assumed that was it. The game was an overhyped disappointment but the world goes on. It was over.

Over the next few months, Hello Games and Sean Murray were getting berated due to their silence. Numerous articles were doing the rounds regarding the game being a flop and how the developers had given up and abandoned the game due to its current state. Sony commented trying to take the blame away from themselves. Death threats were being thrown about like it was a totally normal thing to do. It all became very messy.

In November, the redemption story started. Hello Games finally communicated and revealed an update dubbed “Foundation.” This update brought base building, setting home planets and some more involvement of the alien species found in the game. It also added new creative and survival modes respectively and thus, No Mans Sky began its come back.

The update was a hesitant success, some players who had stuck with the game were overjoyed, some completely swore off the game no matter what and then there were some like me, who went back to check out the new additions and enjoyed them but didn’t stay for long. It was a start and it was good to see that Hello Games had listened to the criticism and was trying to make amends. Soon after the update the negativity began again. Some online comments were leaning towards Hello Games only providing the update to save face and do some damage control so they could move onto another title.

But Hello Games didn’t leave the game. They carried on with the updates. In March 2017 the Pathfinder update was released, adding vehicles and a permadeath mode. The vehicles were a huge success and Hello Games communication was getting better and people were starting to swing towards positivity. The subreddit was full of platitudes not just for the update but for Hello Games and it seemed things were really turning around for the developer.

In August, Hello Games turned it up a notch with the mysterious “Atlas Rises” update. This started as a ARG (Alternative Reality Game) with cryptic emails if you had signed up through the Waking Titan website and puzzles to complete along with other players across the globe. Upon the completion of the ARG, Hello Games revealed the full update details and their redemption was complete. No Man’s Sky got a 30 hour story mode with procedurally generated missions, portals to travel to planets and an exploration mode with up to 16 players with voice and text chat. The game was finally becoming what was originally promised a year after launch.  The community and player base was positive again. The steam reviews were turning positive. Hello Games and Sean Murray were tweeting regularly again. It was remarkable. Once again, I dipped my toes into the update for a while but still did not stick around. It became clear to me that I had moved on from the game I wanted and could not commit myself the way I wanted to. It was too late for me.

Hello Games support of No Man’s Sky didn’t stop and more updates came. In July 2018 we got the “Next” update which saw the game finally come to the Xbox One. This update brought actual multiplayer, the ability to choose your race, assemble and travel with your own fleet, trade in different markets that vary from star system to stay system and better space battles. The planets were overhauled with better variation and overall graphical fidelity was much improved. This was the game that should have been released in 2016 but hey, better late then never. Hello Games had pulled it off.

This brings us to now, 2019 and a new update called “Beyond” is on its way. A recent interview with Sean Murray (yes he’s even back on the interviews!) seemed to alude to this being the final big update for No Man’s Sky. We have VR, we have bigger online multiplayer functionality and we have a third yet not fully announced “Pillar” which according to IGN is an overall update to pretty much every aspect of the current game and mechanics. The VR being an absolute game changer (pun fully intended) as this game always seemed perfect for the PlayStation VR and now, I can actually convince myself that I need the PSVR and the cost is justified.

The journey for Hello Games and Sean Murray has been a remarkable one, a journey that long time players have also been a part of. A game that was once expected to fade into obscurity and only ever leave a legacy of lies and deceit became loved and praised for its quality of life updates as well as its new features. Now, after 3 years, you can call No Man’s Sky an (eventual) success, with some real TLC and commitment from its developer, a passionate fan base and now VR to add to the mix. An amazing and inspiring example of how such negativity and hate can lead to something tangible and positive in this industry that has been challenged consistently as of late. This is more No Man’s Sky 2 then it is just another update and as a player who has dipped into the game now and then over the last three years, I couldn’t be happier.

Tags: beyond, Foundation, Hello Games, Next, No Man's Sky, Pillar