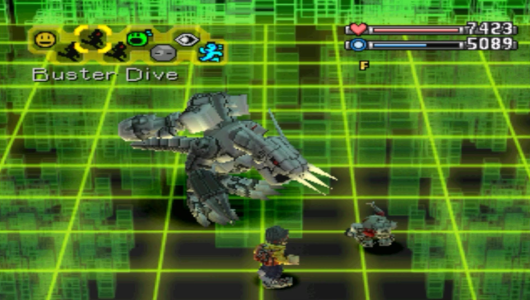 Hello there. You’re probably wondering about the title of this article, or maybe you’re not, regardless I’m going to explain it anyway. This is a new series, a passion project for yours truly (ignore the fact that my writing is also my passion project), where I look at bad games from my past and try to shine a brighter light on them.

Now, in terms of these articles, ‘bad’ can mean many things – It could refer to my personal opinion, or its critical reception. Whether its games I deem substandard, ones that are critically panned or ones that are surrounded by negativity, I will look to the positives as I regale you with tales from my earlier years. By the nature of the subject matter, these articles could get quite personal, so be warned because I won’t be holding back. Who knows, this could be pretty cathartic – maybe even for you as well!

Now the disclaimer is out of the way, let’s get into the games; more specifically, a game that was ever-present throughout my childhood- Digimon World. Digimon World is a game, you guessed it, based on the world of the cult kids anime classic, Digimon. In this game, your objective was to raise a Digimon of your own, with its growth determined by how closely and attentively you trained your partner. With your companion, you would go through the world and battle other Digimon in an effort to bring others to your town. The game belonged to the JRPG genre, in a similar vein to the Pokémon series, and incorporated the fighting and digital pet sub-genres as well.

Digimon World allowed a bright-eyed child (me) to go hands-on with one of his favourite shows, allowing me the experience of raising a digital partner similar to the ones I had seen on-screen. The younger version of me was ecstatic upon discovering the dusty case forgotten in a DVD rack, opening it, and quickly ramming the unfortunate disc into my PS1. I can still remember the nostalgic bassline of the start-up screen now. I was enamoured with the game – I played it on and off for four years and even into the PS2 life cycle (God bless backwards compatibility!) and rarely ever got tired of it. It was one of the greatest games I had ever played. It was one of the greatest games ever!

Across the board, gaming media and review sites panned it, with reviews generally ranging from middling to mediocre. IGN cited its gameplay and graphics as issues – noting an unengaging battle system that will leave players feeling “a bit unfulfilled”, as well as graphics that were “nothing revolutionary”. It was classified as thoroughly so-so. If I had possessed a decent reading level at the time, I would have been livid. This beloved game of mine, which I had poured so many hours into, hardly set the world on fire the way it did in my young brain. When looking back on this game though, especially with years of gaming experience under my belt, I must concede that they were right. Despite this title still holding an immensely special place in my memories, the game had many flaws. So, why did I like it so much?

Well, it’s important to remember that I was four at the time, with my only previous gaming experiences coming in the form of Pokémon Red and Yellow, Super Mario 64 and Dynasty Warriors 2. These kinds of games were still new to me, and they were ground-breaking. But it was more than that. As a young child, I was experiencing a lot of new things for the very first time; the world was being opened up to me and it was all incredible (and overwhelming). At the time, I had just had my first water fight, I’d graduated to the big-boy swing and I was properly starting school. When I think back to this game, I remember a very happy childhood (which I was fortunate enough to have), one where I shared my brother’s love of gaming, and played to my little heart’s content.

The world was new to me, cynicism and critical thinking were foreign concepts, and childlike wonder amplified my experience. This feeling is something I’m sure many of you reading can relate to, I’m of course referring to that old phenomenon, nostalgia. I remember it clear as day. Getting home from a day of learning and play, sitting down on my worn, weathered carpet and pressing the start button. I still recall being accompanied by my blocky partner, exploring the digital landscape, spending countless hours in the training room as I attempted to mould them into my ideal Digimon, and ending up with Numemon every single time. Sitting here, I could tell you all about overcoming the various puzzles within the game, the joys of progressing past difficult bosses, or even that OP b*****d Piximon who would catch me off guard and always take one of my lives. I could bore you further by expressing my heartbreak at my Digimon’s death (an unavoidable mechanic in the game), as well as my quiet optimism at their subsequent rebirth – using it as a blank slate to potentially get my desired companion.

It’s something that is almost exclusively viewed through rose-tinted glasses, especially childhood nostalgia. It can allow feelings long since buried to rise up again, providing a fleeting moment of happiness – and perhaps even a slight smile here and there. See, despite Digimon World not being the best game, it is forever tied to a significant portion of my life. That’s why childhood memories, as well as the experiences that are their foundation, are so special. All the games, shows, books and various other things we experience during these times begin to form as one in our minds; you don’t remember it as a specific instance, rather you look back on it broadly as your youth. This game was one of the first I ever played, and as a result, has directly influenced my view and love of gaming – including my decision to make it a hobby. Digimon World, as well as the fun I had in it, will be forever ingrained in my memory.

Maybe I’m being a bit soppy, but I can’t deny the impact this game has had on me. After all, it’s nearly twenty years later and I still remember it; not to mention I’m writing this article on it. So, when thinking back to old games, good or bad, it could be a nice thing occasionally to remember everything else that was happening in your life at that time. Who knows, you might find yourself smiling too. After all, games are an art form, and art, good or bad, elicits a response from its audience. Maybe that response is to make you reflect, or maybe it’s something entirely different. As long as a game gives you something to talk or think about, it’s not time wasted.

Were there any games that made you feel something? Do you have any memories tied to these experiences? Were these games not conventionally good? Whatever the reason, please feel free to chime in down below and let me know about the games that you most want to talk about.