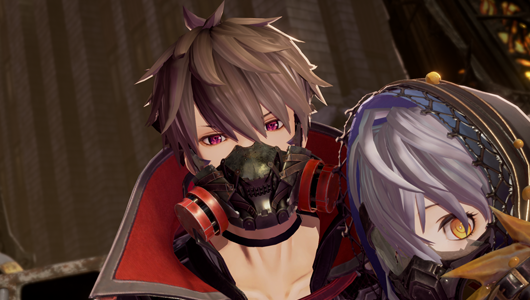 During post-E3 meet at Bandai Namco’s London offices in 2018, we got to sit down and try out a bunch of titles that included an anime flavoured souls like named Code Vein. Playing through the hands-on demo I found that though something didn’t click with me initially, the game has been lingering in my thoughts. Now returning to Bandai Namco almost a year on, I was ready to see if that initial spark has been built upon or lost to a sea of similar titles.

Taking place in a post-apocalyptic setting Code Veinlets you explore semi-open world lands while vanquishing foes with a variety of weapons, abilities and companions… oh and there are vampires too!

Before starting the gameplay portion of the demo, I, of course, had to create my character. Entering a name and codename before jumping into a very robust creator system (though sadly without any bald options to choose from), I fiddled with the options for a bit before just settling on a striking-looking pre-made guy and set off for the tutorial.

Guided by a woman called Cruz, I was to be reborn as a Revenant (basically a vampire), complete with powers known as blood code. Each code essentially works as a combat style that consists of; Fighter
– specialising in melee-based combat with the ability to hold heavier weapons temporarily increase your attack power, Ranger – granting a higher skill for firing long-range weapons at the cost of ichor energy which you can then recover from enemies, and Caster – the ability to cast powerful magic to shoot flames, drain energy and more. For each code you chose to apply, your character’s stats will change to better suit their abilities and provide a selection of special moves called gifts, which are also fueled by ichor.

Deciding to mainline my playthrough as Caster, my character woke in a ravaged city street, stripped of their memories and following the leadership of a mysterious Girl in White. Shortly after running into some less-than-friendly fellow Revenants, the two are taken captive and forced to explore the land in search of capsules of blood called Blood Beads. From this point is where the gameplay portion of the demo kicked in.

Just taking a look at the gameplay footage for a moment will no doubt cause anybody to draw comparisons with From Software’s Dark Souls series with the game’s style of combat but it’s thanks to Code Vein‘s speed that I felt more at home being a fan of Bloodborne. Feeling more like a methodical hack and slash title than a balls-hard RPG is what gives the game an edge. As I began to get an area’s location down to memory and dispose of enemies with slightly more ease than a first attempt, I’d get more gifts to play with and kept thinking of how badly I’d like to expand with different blood codes following the eventual full release.

Though my time with the game was shorter than I would have perhaps liked (about one hour including tutorial and cut scenes), the improvements made in comparison to last year’s version were apparent and actually swayed my decision to want to pick Code Vein up in the near future.

At the moment of writing, we still don’t have a confirmed release date for Code Vein – outside of 2019 that is – but there is good news for some. Announced today, there will be a network test to show off the game’s cooperative functionality.