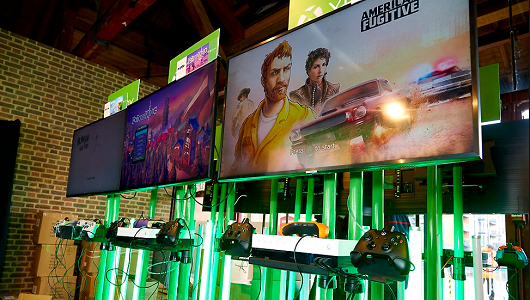 I recently got to attend EGX Rezzed 2019 at London’s Tobacco Dock. There were people to meet, cosplays to admire and live podcasts to partake in. However, more importantly, there were games to play – and here are some of this year’s highlights.

The most fun I had at EGX Rezzed was American Fugitive, developed by Fallen Tree Games. It’s an open world action adventure game that puts the player in the shoes of a (you guessed it) fugitive – on the run from the police in a bright orange jumpsuit, the goal is to find some new clothes and prove your innocence.

The nearly top-down visual style is really charming and makes the game look like a toy play-set to cause chaos in. Each vehicle has its own satisfying feel, with muscle cars fishtailing after high speed turns, slower sedans feel heavier in acceleration and diggers… well, basically driving through everything – except an oncoming train.

As with any game taking place on the wrong side of the law, there is a small (or large, depending on your play style) amount of crime involved. Breaking into houses will trigger a mini game where the player can only navigate the building one room as a time, but you’re against the clock before the police arrive. Multiple times I tried to clear the entire house only to leave through a window into the patrolling police officer as I didn’t give myself time to escape.

One aspect that I really liked was the respawn system, each time you were either killed or captured, the character emerges from a random sewer pipe somewhere on the map, once again in his distinctive prison jumpsuit. Although mission progression is not disrupted, this respawn system manages to maintain the feeling of being on the run all over again.

American Fugitive will be available on PC, Xbox One, PlayStation 4 and Switch, however no release date has been announced at this time.

UpperRoom Games brought their first commercial game, Wavey the Rocket, to EGX Rezzed. It’s a bright and colourful 2.5D side-scrolling arcade game where you do none of the scrolling – as the titular character only follows a wavey line. Confused? So was I. The way the player navigates the level is by controlling the amplitude (height) of the wave and shortening and stretching the wave to speed up/down.

This incredibly simple concept was designed by a team of three at UpperRoom Games. It pretty much defines the “easy to pick up but harder to master” statement. At first the game asks you to navigate a few obstacles to avoid and collect points. As Wavey never stops, the inclusion of moving enemies means the player has to plan ahead further with less time to react. The game definitely has a bit of a difficulty gradient, however it’s alternate idea on a well known genre had me coming back for more again and again.

Wavey the Rocket will be available on PC in 2019 with plans to release on Switch, PlayStation 4, Xbox One and Mac shortly after. A demo is available on their website at https://upperroomgames.itch.io/waveytherocket

The most addictive game I played at EGX Rezzed was Lonely Mountains: Downhill, by Megaton Industries. This arcade downhill biking game has an adorable block art-style and a great premise – get to the bottom of the hill by any route necessary. This free roam puzzle element really helps the adventure of trying different routes and techniques to reach the next section.

The respawn system is instantaneous, once you crash, it sets you back to the last checkpoint passed. These are spaced out far enough apart to be a challenge, but not so distant that the game becomes infuriating. It’s really captures the “one more try” mentality, especially given that there are many different paths to follow, some more dangerous than others. So many small details seem to give this game character, the way the bike flares out a little during jumps or the way the rider seems to exhale in relief after a particularly fast section help the game stand out.

Personally, I loved this game as I used to ride downhill trails back home. The fun and responsive controls really help capture the adventure of only just being in control and no idea where the next path goes. Lonely Mountains: Downhill is planned for release on PC as well Xbox One, PlayStation 4 and Nintendo Switch in 2019.