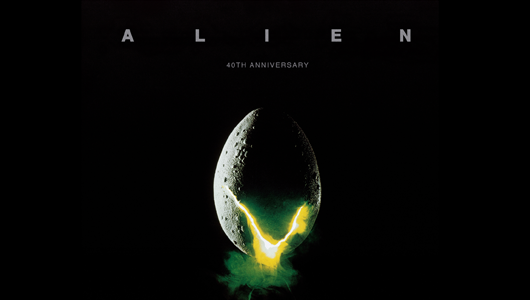 It’s been 40 years since Ridley Scott first unleashed the horror of Alien upon an unsuspecting universe. To celebrate the past four decades of terror, 20th Century Fox and Deluxe Entertainment Services Group, in conjunction with Scott himself, have restored this sci-fi classic in 4K and it will be hitting the big screen once more to terrify movie-goers once again.

Opening at BFI Southbank in London for a two-week run, Alien will then be available to watch on selected cinemas for a limited time. I was invited to an advanced preview at the BFI screening rooms to experience the horror on the big screen for the first time, and even in our current age of cinema full to the brim with science fiction and low budget horror, there is still nothing quite like Alien.

The story follows the crew of the Nostromo, a space tug drifting through a remote section of the galaxy on its way back to Earth as they are awakened prematurely by the ships A.I., Mother, after receiving a strange transmission. The crew, bound by the law of their mysterious employer ‘The Company,’ must investigate the signal or receive a cut to their pay (yes, really).

Once on the planet, the ground team quickly run into serious problems when one of their team, Kane (John Hurt) is attacked by an extraterrestrial life form that attaches itself to his face. Once back on the ship and homeward bound, all hell breaks loose as the original life form, now dead, has impregnated crew member Kane, and a new improved life form is now loose on the ship, killing off the crew one by one. Nothing is as straightforward as it seems, however, but to explain more would be to ruin the surprises. 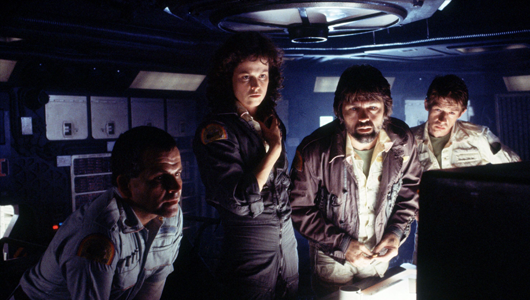 I’ve lost count how many times I’ve watched Alien over the years. The first time I remember seeing it, I was around 12 years old and I’d snuck downstairs to watch it on the television once my mum was in bed, and although has got better every time I’ve watched it, seeing it in 4K on the big screen felt like the ultimate viewing.

A lot of the issues that come with high definition restoration are still present in 4K. The blur of a VHS or a CRT television went a long way to mask the fact that the impressive space backdrop we were looking at is, in fact, a painting, or the impressive external shots of the Nostromo and its dropship are miniature models built made from various Airfix kits.

But whereas in other, more modern movies, these details would make the movie look cheap and pull me out of the experience, with Alien I actually found it endearing. It made me appreciate just how much manual work went into making the sets, ships, and backdrops look as good as they did with the technical limitations of the time, and how to this day they still stand up to and in a lot of cases are vastly superior to many movies that came after. 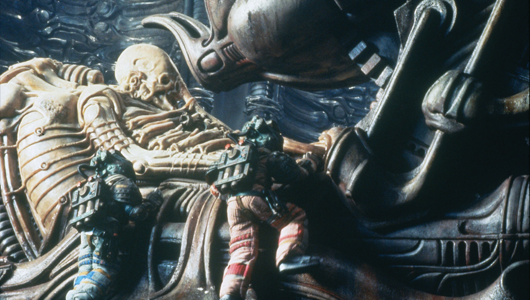 I’m an advocate for practical effects in movies, and Alien is one of the reasons why. H.R. Giger’s otherworldly creature and set design are just as impressive now as they were 40 years ago, and it’s a testament to the set builders that Alien looks and feels more ‘real’ than series successor Prometheus.

The interior sets still look incredible. The downed ship on moon LV-426 looks just as horrifically alien as it ever has, and the insides of the Nostromo itself still look completely convincing. A couple of the exterior shots don’t hold up so well, specifically any time we get to see the crew through a window or see the Nostromo from a distance. The time it was the most obvious that I was looking at miniature models was a shot when the dropship unlinks from the Nostromo before heading down to the moon, it looked less like a sci-fi masterpiece and more like an episode of Red Dwarf.

There are a couple of shots of the creature itself that look janky, but I think that’s less to do with the 4K restoration and more to do with the fact that it always looked that way, but while I’m airing my grievances I might as well bring it up – 40 years later the shot of the monster slowly approaching Lambert (Veronica Cartwright) still looks rubbish. You’ll know when I mean when you see it. 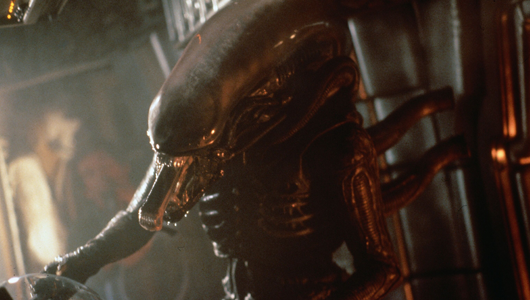 As good as the movie looks, however, the restored sound steals the show. The ambient hum of the Nostromo’s engine and computers haunt every scene, and Jerry Goldsmith’s haunting score is more affecting than ever in spruced up surround sound, Audio Mechanics have truly done an incredible job with all aspects of the sound restoration.

Alien is renowned as a classic for a reason. It introduced audiences to the monster that James Cameron would later dub the ‘Xenomorph’, which has gone on to become one of the most revered movie monsters in modern history, and even more importantly it introduced us to Ellen Ripley (Sigourney Weaver), one of the most important and influential heroines to ever grace the silver screen. She was kicking alien ass a whole 5 years before Sarah Connor was running away from a cyborg Terminator, and also worked as the inspiration for Metroid’s own Samus Aran.

If you’re a fan of the series of a first-time viewer you owe it to yourself to watch Alien during this cinematic run. The version hitting screens is the original cinematic cut so none of the weird continuity breaking moments from the Director’s Cut (or the crab walking lifeform) will leave you scratching your head. The 4K restoration does wonders to keep the movie timeless, and it will be a long time until we get to experience this sci-fi classic in this way again. Go see it.