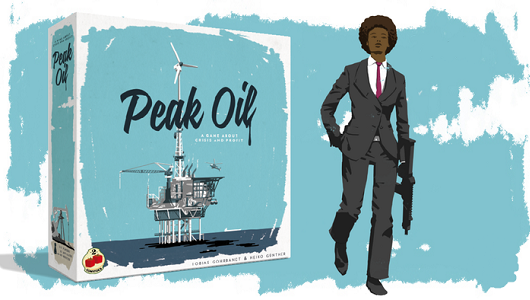 Peak Oil is a stylish, middleweight worker placement game based on the eponymous concept that the world has passed the point of maximum oil production. Despite the name, Peak Oil is too cool to engage either with hair-on-fire apocalyptic predictions of civilisational collapse, nor with supply and demand driven pricing simulations for scarce resources – this is not Power Grid, for better or worse. Instead, you play as stylish energy corporations jockeying to squeeze the last juice out of the oil age. You make big bets on the energy technologies of the future using the resources of today. You put your finger on the scales to bolster your investment portfolio and sink your rivals. Peak Oil looks great and has a neat theme. But it is also a confusing, unintuitive game with far too many contingent rules, which makes it hard to recommend.

The most basic mechanic is placing your workers, here called agents. On a player’s turn, they can place one agent anywhere on the board, and then either place a second agent, or take an action with their existing agents. Agents can be stationed on the four action spaces on the bottom of the board, each with two different associated activities. If you have the most agents on a space, you can take both listed actions in a turn. If you are only tied, you can pick one of the actions, and must also draw a barrel (see PR risk, below). If you are outnumbered, you can’t do anything with those agents. But once someone takes an action, their agents return to their off-board HQ, which may allow other players to use the space.

Five technologies sit at the side of the board, representing undeveloped future energy sources. Players start the game with a portfolio with shares in three of the five sources and can accumulate more through investment. Each technology will pay off for each player as a combination of how many shares they own and how developed the technology has become. The catch is, shares become more expensive as the technology develops, and investing takes valuable worker turns. Players can also accumulate barrels of oil by drilling, sending their agents to the regions, and shipping the oil to refineries. For those with extra workers to spare, there are also an array of consultants to hire, which provide minor bonuses. 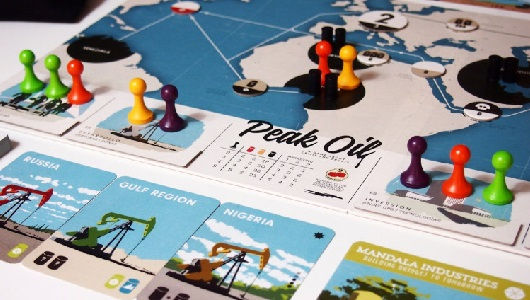 These dubious energy companies must also manage their public relations risk. Some actions, like drilling for oil, shipping via dangerous routes, and taking actions in squares you don’t control, involve the risk of a PR crisis, represented by drawing a barrel at random from the bag. If you draw a yellow or red barrel, you suffer a crisis. These begin as small penalties, but if they are left to fester, they can quickly turn into serious crises. PR crises can be whitewashed away through using the appropriate action, though this gets more expensive as the crisis worsens.

There are some interesting strategic choices to be made: invest in unproven technologies while they’re still cheap, or accumulate oil resources first to spend on known winners. Block other players, or concentrate only on advancing your own agenda. Use valuable turns hiring consultants, or ignore them in favour of investing directly. Drill for oil, or free-ride on other players’ drilling by going directly to the regions. Some of these choices are probably better than others, though it seemed in the games I played that most strategies were roughly equivalent. Peak Oil seems like a very tactical game, but in practice it was hard to find strategies to either advance decisively or block other players. Instead, players slowly built their portfolios while avoiding being blocked, which made Peak Oil surprisingly non-interactive for a worker placement game. More ruthless strategies may emerge with more familiarity, but I never got to that level. 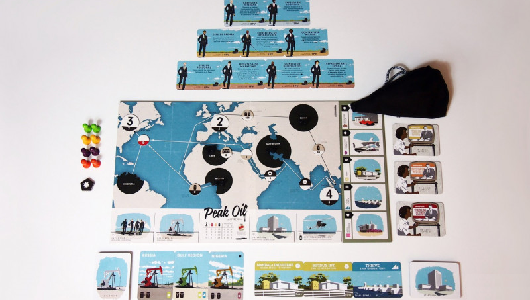 The art is the star of this production. There is a sleek, WPA-style artistic theme that gives the project a satisfying aesthetic unity. The retro style fits with the day-after-tomorrow setting to give the whole game a retro-futurism feel which both calls forward to the transition away from fossil fuels, but also back to the 1950s heyday of the big global oil companies. The game has a strong physical texture, with robust pawns and barrel tokens, a mysterious black bag, and solidly constructed cards and play board. Overall, it looks great, a very nice piece of visual design.

However, the rules are an overly complicated mess. Too many things are used in multiple ways, especially the barrels of oil, which somehow represent oil reserves, wealth, risk, and technological advancement. Once all the pieces are in place, the rules do function together, but are not easy to follow, and are almost impossible to explain in one run-through. Worse, since the rules to not follow on from the theme in a very intuitive way, they are hard to remember. Once you’ve played a few games, it settles down, but for a middleweight game, this is a very high rules burden that will turn off all but the most interested players.

Some of the mechanics feel equally disconnected from their common-sensical meaning. Barrels of oil pulled from the bag as part of the risk component of drilling are placed on the black market. Barrels stolen from shipments by pirates are also placed on the black market. I guess this represents theft and corruption? But when the black market fills up with oil… the barrels are evenly distributed back to the producer regions. Are these oil pirates, or Robin Hood, or what? Equally odd is that barrels from the black market are moved by players from the market onto technologies, presumably representing investment. But why would you go to a black market for oil to invest in new energy technology? From a game balance standpoint, these choices make some sense. But the mechanics don’t match the story, a common problem for top-down game design. 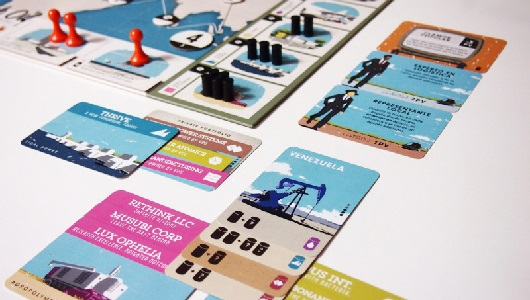 It is probably for the best that the creators decided to casually breeze past the controversy over peak oil, which tends to attract both cranks and pedants. But there is surely a missed opportunity to build a properly economic game. In Peak Oil, there is no market in the conventional sense. Oil does not have a price, only a quantity. Even more weirdly, there is no money at all. Producers engage directly in barter via barrels of oil to purchase shares in new forms of energy. But the entire concept of peak oil involves the price effects of decreasing supply and increasing demand. If you’re not going to model that fundamental scarcity, why pick this theme?

Visual design is beautifully executed
Neat theme will draw players in
Rules burden is very heavy, without much payoff
Theme doesn’t pay off like you want it to
Not as interactive as most worker placement games

Peak Oil is a playable game with an interesting theme, excellent art design, and the potential for interesting tactical gameplay. Its weaknesses are its mechanics. They are far too many and too complicated for quick, entertaining lightweight gaming, but not engaging enough for complex heavyweight strategy. There isn’t really anything catastrophically wrong with Peak Oil, except perhaps how hard it is to explain to new players, but there is surely a more interesting game to be made about the idea of peak oil.