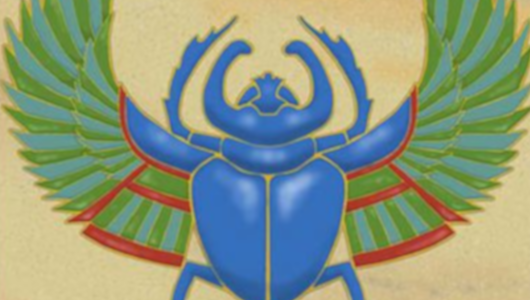 Ever since Ominoes, a game of dice rolling and placement with a light Egyptian theme came out, I could not stop shouting about it from the rooftops. It encapsulated everything I loved about board games, including a great balance of strategy versus luck and a mischievous game-play mechanic where player interaction was key. In my opinion, it was also a very underrated game, which should have received more praise and attention than it did.

It is safe to say that Andrew Harman of YAY Games and designer of Ominoes had set his own bar high for the next game he was working on. Indeed, following Ominoes, Andrew did something very clever. He decided to capitalise on its name, theme and core ideas for his next game, while at the same time creating something that can confidently stand on its own, without the help of its older brother. This is Ominoes: Hieroglyphs.
– 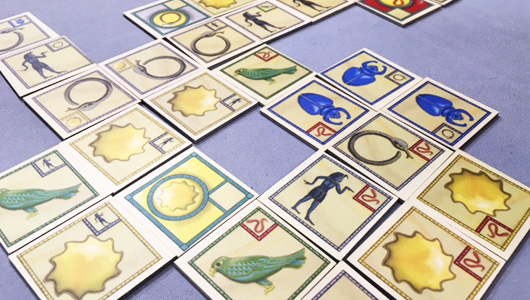 If you are familiar with Ominoes, you will recognise the iconology and the basic theme of the game. Ra, Ominotep, Horus and others are still here, doing the Egyptian dances. Even the core, basic idea is here: add an element to the board from the hand, collect a set of four or more of the same symbols, reap respective rewards. However, where there were dice before, in Ominoes: Hieroglyphs, there are now tiles. Where there was rolling, there is now flipping.

It is fascinating how something that has such a similar premise, can feel and play so differently. Hieroglyphs is definitely a meatier game that encourages players to consider the arrangement of the board, analysing all options for the best, most lucrative outcomes. It sacrifices the breeziness and the fast pace of Ominoes for more puzzle elements and deeper thinking. 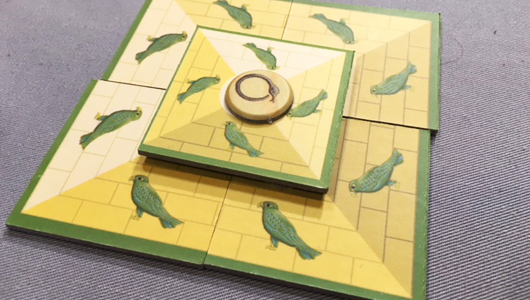 In Hieroglyphs, the tiles of the same type are played from the hand to the board. If an arrangement of four or more is made, a player receives a corresponding token. Then they can flip the tiles that were just placed on the other side and potentially score again if a group of four or more with the same icon is formed. Each tile has the main side and a little icon indicating what is the main symbol on the back. For example, it can have a Horus on one side and a Snake on the other. This would potentially allow a player to score a group of Horuses first, then flip the tiles over and score Snakes.

Sounds easy enough? Well, it’s not. Scoring twice, while not at all uncommon, will require some careful pondering. It is not unusual to see players mumbling softly to themselves, turning the tiles in their hands from one side to another while eyeing the central board in order to figure out how to make the move work.

There is an additional worry that with your move, you will also unintentionally set up a great play for your opponent after you, which increases the brain scratching element of the game. Therefore, rounds can take quite some time. However, when the moves pay off and a clever placing/turning combo yields enough tokens to build a piece of a pyramid (a complete pyramid is required to win a game), there is an incredible feeling of satisfaction. Hieroglyphs is very good at making players feel clever when a moves pays off, but equally, it can be a little disappointing when it does not. The latter sometimes is a player missing a great move, but also, more often than not, it can be beholden to the luck of the board layout. 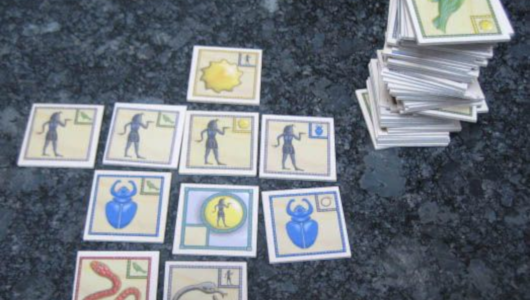 –
While the puzzle element of the game on a turn-by-turn basis is great, the downtime is also Hieroglyph‘s biggest enemy. Every player adds and subtracts something from the board, therefore pre-planning is rarely possible. The thinking clock starts as soon as the player before finishes their turn, and the time to make a decision on a move can vary significantly. The play can be obvious or it can take minutes to figure out. Some players opt for fast moves to keep the flow of the game going, even if they miss out on a great move. However, others like to consider all of their options. There isn’t a wrong or a right way, but the longer it takes someone to make a move, the easier it is for other players around the table to lose interest.In addition, Hieroglyphs has several minor rules that are essential to make the game-play as tight as it is, but they can also take some time to remember. Tiles need to be taken off the board, there are special temples that give players bonus tokens, only three tokens of the same kind can be kept at the end of players turn, pyramid needs to be built in a certain sequence and so on…There is a certain confidence and simplicity that Ominoes has, that Hieroglyphs lacks due to it being slightly overburdened with rules, making it harder to get into the game, especially for new players. What helps the game, is that all rules follow a consistent game logic that is easy to understand, in turn making the rules easier to remember down the line.
– 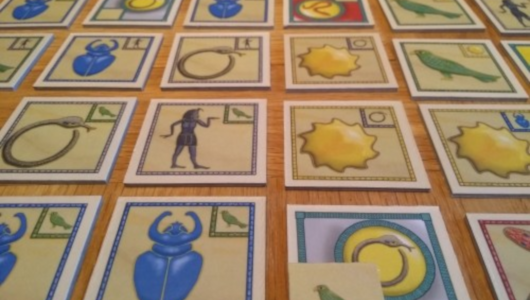 While the Egyptian theme offers the convenience of neat recognisable iconology and certainly works for the game mechanically, it is essentially window dressing. However, for the type of the game that Hieroglyphs is, that is completely fine. During the game, the players want to be focused on spotting patterns and not trying to figure out what it means if you make a group of four suns. (Possibly, some evil curse will be unleashed on sacred lands…)

The components of the game, while simple – cardboard pieces of various shapes – are also functional and clear. The artwork – that worked perfectly on the small dice of Ominoes – does not look as good on the bigger cards. There are certainly games that are prettier or made look more modern with sleeker graphics, but in Hieroglyphs everything works perfectly fine, serving its design purpose and making the game easy to understand with clear iconology.

While looks are, of course, subjective, the only real criticism of components is how fiddly the tiles can be, especially if a whole lot of them needs to be flipped right in the middle of the arrangement. It is impossible not to push or nudge adjacent tiles, which in turn – maybe not as dramatically as toppled dominoes – slightly edge the tiles next to them, requiring the whole board to be straightened out afterwards. It may be a small nit-pick but can become slightly frustrating as the game goes on.

While comparisons to Ominoes are unavoidable (the games do share the name, after all), playing the former is not at all are prerequisite before giving Ominoes: Hieroglyphs a try. Both games are similar, yet very different at the same time. They scratch the same mischievous puzzle solving itch, but in different ways. Hieroglyphs definitely rewards an observant player, good at spotting patterns and thinking a few moves ahead. Its play is tricky, but not so complicated it is daunting, providing a great feeling of satisfaction when a combo of moves is chained together. It is definitely worthy of its name.