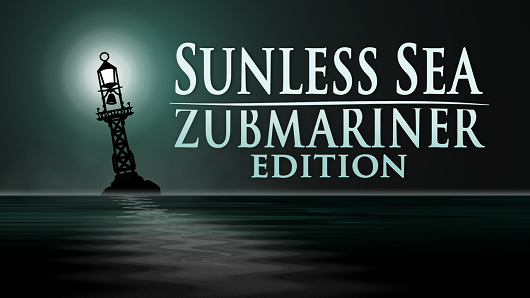 The long anticipated console release of Sunless Sea brings with it the Zubmariner expansion, and a whole lot of Terror, above the waves and below.

The setting is shared between all these games: a very alternate history where, through a series of calamities too terrible to detail here, Victorian London has sunk beneath the surface of the earth to the shores of a endless underground ocean known as the Zee. Bringing together elements of science fiction, gothic and eldritch horror as well as comedy that veers from pitch black to whimsical, Sunless Sea wears its influences on its sleeves, then does all it can to surpass them.

You play as the Captain of a Zee ship, setting out from London and exploring the terrifying dark beyond. The character creator allows you to not only choose your Origin, which plays into the stats and the perks that you start with, but also your Ambition, the condition which allows your captain to retire happy or at the very least in one piece. The game also has a number of pronoun options, which you can select independently of the name you give them. They include Sir, Madam, and the much more dignified Captain. 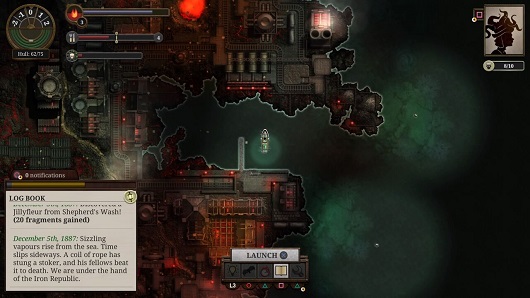 Once you have your name, origin and pronouns picked out you can set sail almost immediately. You take a birds eye view of your craft as you sail, making adjustments to the speed and direction to outmanoeuvre your foes and other nautical obstructions. This can be slow going, as the map of the Zee is obscured at first and can only be cleared by moving across it. The ship’s initial engine speed is quite slow and it can be a tedious spending minute after minute chugging along the empty water.

You’ll probably want to make use of that time. Despite the complexity there’s not a lot of turorials in the early stages of the game which can make negotiating the complex process of ship driving a little tricky. You are given a book of instructions to get you on your way but it’s not always the easiest thing to negotiate.

Occasionally you’ll come across an enemy, be it a rogue pirate ship or some of the Zee’s more vicious flora and fauna. Combat is serviceable, it mostly involves keeping your ship out of either range or angle of fire from enemy vessels and getting into position to reply with an attack of your own. Although it can be satisfying to angle your ship past incoming cannon fire and respond with a fatal shot, it’s far from the main attraction.

Exploring and reaching new lands is important, because each time you arrive in a place you can write a lucrative port report to take back to London, as well as getting embroiled in all sorts of local goings on. This is where Sunless Sea really shines. The Zee is a dark place, where miners scrabble away at fungal growths and pirates and privateers struggle to gain control of the few scant resources available. It’s up to you to interfere, or not. More than anything Sunless Sea is a game about mystery, about uncovering the dark truths of the world and often suffering for it. 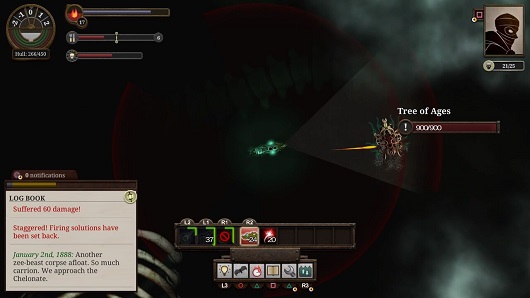 Each location has a host of stories attached, some of which become apparent as soon as you arrive and others which have to be extracted over repeated visits. Sometimes the requirement is the money you need to buy a round at a pub and win over the suspicious locals. Other times you’ll need to test your luck by making a check against one of your abilities, to say, seduce a wealth heiress or prevail in a back alley punch up. Whether or not you’re successful, the game does an excellent job of piquing your interest and you’ll find yourself completing the more rote tasks of shipping and cargo transportation just to ensure you have the resources necessary to delve deeper into the darkness.

Aiding you in your nefarious activities are your crew and your officers. Crew are a resource like any other, they make it possible to operate your ship and take part in certain activities in port. The Officers are more important NPCs that not only provide company and dialogue related to their own tragic pasts and the history of the world, but also upgrade your various stats and ship’s performance. You can buy new ships too, if you can accumulate the coin. However fuel and supplies are so expensive early on that you need every pound you can get.

Running out of fuel or food whilst sailing is a very real risk, especially when you don’t know exactly where you’re heading. Should you run out of food before reaching your destination, you can always resort to cannibalism, although that carries with it a decent chance of being cannibalised in turn. Running out of Fuel is even more dire, as a stranded ship leaves you no choice but to beseech the gods of the Zee for aid. Stone, Salt and Storm are as mercurial and tricky as you might expect, and my first captain met their end after a series of disastrous sacrifices. 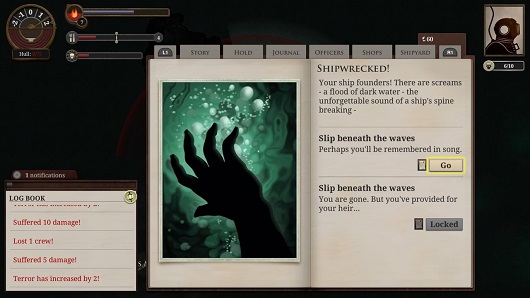 Events like this are all too common in Sunless Sea, death lurks around every corner, and underneath every corner, and occasionally from above the corner. But the game warns you from the outset that your first captain is likely to perish. When you lose a captain you start over in London, inheriting a little of the items and equipment left behind, to make you better prepared for the next outing.

Sunless Sea incorporates these roguelike elements without ever feeling like it’s deliberately penalising you. Death and futility are such core parts of the fiction that you find yourself eager to set sail again and again, in pursuit of whatever eldritch truth eluded you last time.

Brilliant and complex stories
Unique setting to explore
Cannibalism!
Exploring can be slow
The lack of tutorials can be confusing

Ultimately that’s where Sunless Sea excels, making sure your reach exceeds your grasp, dragging you from bad to worse with a wry smile. If you’ve ever wanted to visit impossible locations, lose your mind at sea, or face off with the worst horrors of the universe has to offer, Sunless Sea is the game for you