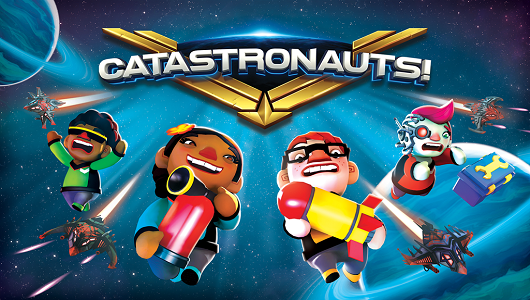 I’ve been looking forward to Catastronauts since it was first announced back in April. The fast paced and chaotic co-op game-play and cutesy art style looked instantly familiar, and I was excited to see this apparent next offering from Ghost Town Games. Imagine my surprise then when I jumped online to find out it wasn’t developed by Ghost Town Games at all, but a small studio from Cambridge called Inertia Game Studios who up until now had only made Facebook and mobile games.

I began to get worried. Conceptually and visually, Catastronauts looked so similar to Overcooked I was afraid it’d end up being nothing than a cheap knock-off, something thrown together quickly to capitalise on the popularity of Overcooked. However, later that month I was able to try an early version of Catastronauts at EGX Rezzed and all my worries disappeared in an instant, and for the next 6 months, I was eagerly awaiting release day.

The game-play in Inertia Game Studio’s console debut is like a mix between Overcooked and FTL: Faster Than Light, and I don’t feel cheap making those comparisons as the studio themselves name those titles as the main inspirations for Catastronauts. It is described as “a hectic 1-4 player party game” and in this case, I believe ‘hectic’ to be a grave understatement.

You play as the Cadets of Space Fleet as you try and rescue your commander from the evil clutches of Zastral and his Quazards. This rescue mission takes place over 30 levels which see you manning various Space Fleet ships and battling Zastral’s forces, each with their own weapons and hazards to master and overcome.  Cadets have a cute and fun design, and new cadets are unlocked after each five level hub has been completed so you’ll find your favourite in no time. 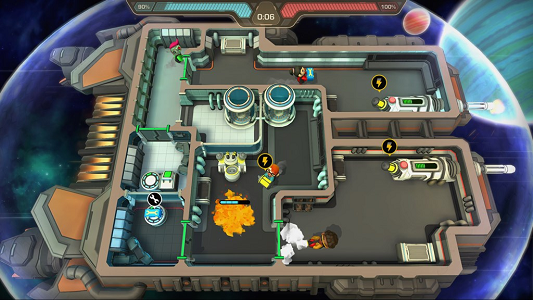 Levels take the form of a space battle which see you maintaining your ship while attacking the enemy. The enemy Quazard ship is constantly barraging you with laser fire which causes damage to your ship, cracking the floor and destroying your canons and any other equipment that may be in the level. The first ship to reach 0% health loses and explodes in a ball of fiery death. It sounds simple, and at first it is, but it soon turns hellish.

Your ship is constantly bursting into flames which need to be put out with the extinguisher, and all other repairs must be made with the repair box. Fixing the ship will recover a small amount of health, but not all damage can be recovered. As if this wasn’t enough to keep you busy the game throws missiles at you that need to be deflected by switching on your shield, environmental hazards such as solar flares and flash freezes, mines that warp onto your ship and need to be thrown away, and a whole lot more that’ll keep you screaming at your TV for hours. 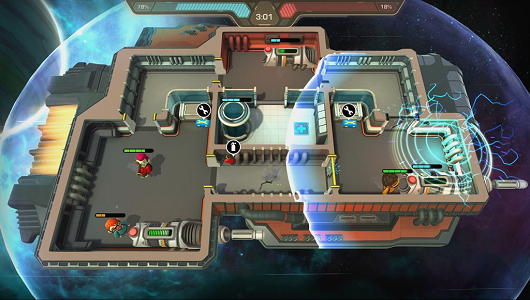 Attacking the enemy isn’t any easier. At first you have simple cannons that can be fired when charged, but as you progress you’ll need to charge batteries to fire the cannons, deal with cannons that overheat and explode, and prepare missiles and highly volatile energy cylinders. Oh, and several of these need to be fired co-operatively! Cannons and preparation stations can also be destroyed and will need to be repaired, and dead Cadets need to be revived by a partner via the cloning machine. Communication (and shouting) is essential if you’re going to win, so make sure you’re playing with intelligent and thick skinned friends. It’s hectic, it’s infuriating, you will lose (your temper) a lot, and yet somehow Catastronauts manages to remain fun throughout.

You get rewarded between 0 and 3 stars at the end of each level and from what I can gather they’re rewarded based on how quickly you win the fight and how much damage your ship takes, although there’s not clear indication of this. Unlike Overcooked where stars are need to unlock later levels, levels in Catastronauts unlock automatically when the previous level has been completed, and the stars, at least as far as I can tell, are just for bragging rights. And if you can get three stars on each level then you most definitely have the right to brag because this game is tough as nails. 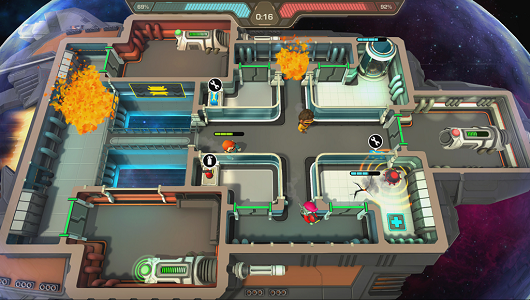 Don’t let the cartoon-y Star Trek inspired aesthetic fool you, Catastronauts is a difficult game to master, and sometimes it feels a little too difficult. It’s a short game, maybe only two or three hours so the focus is on repeat playthroughs to get those stars. However, there’s as much skill involved as there is luck when it comes to how well you do battle to battle.

Everything that happens during a level is completely random. What I mean by that is although you’re constantly being attacked, and maybe there’s an environmental hazard, it’s completely random where, how hard, and how often the ship will be hit. This level of randomness, although fun for quick party play can get frustrating when going for those stars.

Catastronauts is far from a perfect game, but there’s no denying it’s a fun one. It lacks the same polish as that of its main influences, and I encountered a couple of weird visual bugs when taking a photo at the end of a match (a lovely little feature if I may say so myself) and when activating the deflector shield during the hectic final battle, but I have every faith in Inertia that they’ll be patched out in no time.

If you’re looking for a fun and frantic local co-op game to play with friends and loved ones then you can’t do much better than Catastronauts. It’s a worthy addition to the multiplayer genre and can take a seat alongside the Overcooked games as a mainstay in my girlfriend and I’s library. I can’t wait to see what the guys and girls at Inertia Game Studios add to it over the next few months, and I’m genuinely hoping for some DLC. But until then, I have some stars to collect.