Looking for a two-player, 10-15 minute abstract strategy game that is easy to learn and play, yet has a surprising depth of thinking to it? And is good value to boot? Well, that’s fortunate. Ladies and gentlemen, may I introduce you to Thronestorm…

Oh no! The kingdom is divided. If only there was some way of unifying it…

What, you mean by scouring the realm for relics? And putting together a matching set of priceless adventuring gear comprising one of each of the four available item types? By being the first to collect a full set of relics belonging to one of the ten different noble houses and hence save the realm?

Yes, well, quite. OK, fair enough Grimswold, fetch me my lucky searching socks and lets to it. This should be simple enough, right?…

Bring me my Bow of Burning Gold.
No?  Er, How about my Arrows of Desire?
No? OK… just bring me my bloody Chariot of Fire! 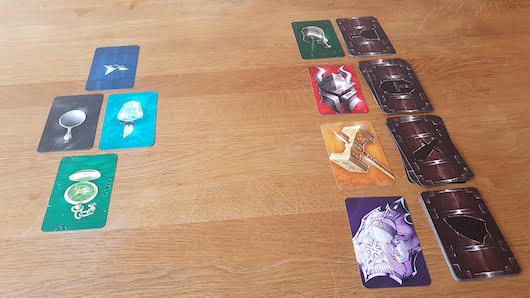 Then, on their turn, players can do one of (just) two things:

They can ‘Claim a relic’ by taking the topmost (visible) relic from the reliquary (supply) — and adding it to their own inventory (in front of them), or to the realm (game area). Players cannot hold more than one of any relic type in their inventory, with duplicates going back to the realm. (If a relic is taken from the reliquary, the next one is turned face up to replace it.)

Or, they may ‘Hatch a plot’ by moving relics between the realm and their inventory. Relics are taken from the realm in groups of three on a diagonal from the row nearest you — and (any) three cards must then be returned back to the realm. Players can only take relics on a diagonal if the relic on the bottom row nearest the player has a colour that matches with a relic that is already in their inventory.

Play then continues turn-by-turn until one player obtains a full set and wins the game – and that’s basically it. Writing out an explanation of the rules took far longer than was needed to show or understand (especially with the clear and simple instructions provided). 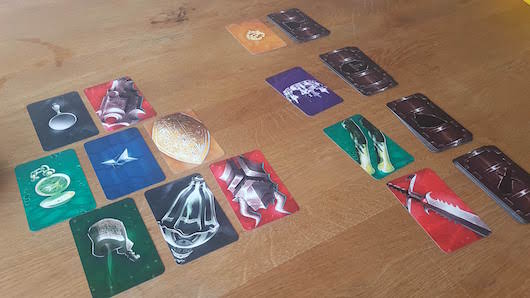 Games-wise, I like surprises. Do you like surprises? Well playing Thronestorm certainly provided me with some — whilst at the same time giving a lie to my initial preconceptions.

At first, I thought I had this game pegged before even opening the box. Why? Because it’s a small box. With cards in it and not much more besides.

You see, I’ve recently played (and reviewed) a fair few of these pocket-sized ‘lite’ games (as opposed to the big box, big bucks, board games that tend to catch all the attention). Like me, you’ve probably got ’em tucked away higgledy-piggledy on their own shelf in the Kallax, away from the big boy boxes. (Just why does the lid for Jaipur never close properly?)

They’re usually petite, with a limited number of components, fairly easy to learn, quick-to-play, ideal for a journey or perfect for scratching a gaming itch without spending hours on the job. You know, the game snacks you can play between board games without ruining your appetite.

And generally, you’d also be forgiven for thinking that small on pocket (or complexity), means small on strategy.

But no, not so Thronestorm. “Wow. It’s really quite strategic isn’t it?” I said as I got my proverbial handed to me on the first few plays. Master of understatement (and tactics), me.

How you manipulate the central (realm) area, what colour (house) to collect, when and how to seed your nearest row in the realm for future opportunity creates an intricate and enjoyable challenge that is the core of this game.

It really is one of those games that with just a few simple rules creating the framework, it punches well above its weight in terms of the mental acrobatics it puts you through. “If I take that and then he goes there can I collect that next turn whilst blocking him from collecting that?” “But then again, what if I now go here…”

In fact on one of the play-throughs in our group, the intensity got so high (and the analysis paralysis so great), we went way beyond ‘plays in 10 minutes’. There are tactics to be learned and mastered over time and replays with this game. I just can’t quite grasp what they are at the moment…

It feels a well thought-out game too. With such a simple rule-set the mechanics feel really solid, granted there’s not much there to go wrong with, but equally, there’s no room for exploits or uncertainty in play either. 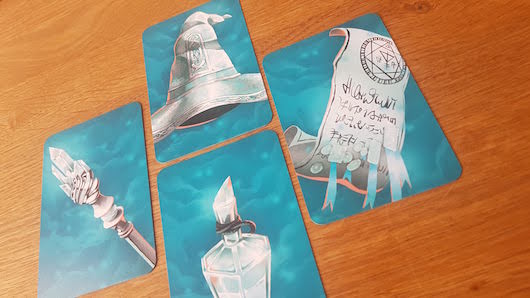 Secondly, when we laid out the cards, I thought I had this game pegged before we even started playing.

You see, with the cards laid out in the game grid just so, it looked a bit like Star Realms or Dominion or countless other card draughting/hand management/fighting games. The artwork has shields and swords and magic stuff on it. Dead giveaway.

But no, not so Thronestorm. It’s not a deck-builder. You’re not deck-building (a.k.a. looking for synergies, reading the small print, buying special booster packs), you’re simply collecting sets.

Four relic cards of the same house. One hat, one cup, one sword, one shield, all the same colour. Sounds riveting, right? Except when you play it, it is. What cards you can see in the central realm, what you can take, when to play what card where, and how to stop your opponent winning in two moves time makes this game far more akin to the brain-wrangling found in Chess than that of Happy Families. And that’s good too. Great in fact.

Simple, subtle and surprisingly strategic
Quick to learn, quick to play
Minor artwork niggles for some

Otherwise, the cards are impactful (with a different ‘class’ for each house’s relic artwork) and are big and bold (the designer telling me that they wanted to create a different kind of icon-free look).

However I did see evidence of some small issues in differentiating between a couple of the house colours in low-light conditions, and additionally for some of the artwork, it is not readily apparent as to which relic type it is when face-up (is a lute a shield or a sword?).

That said, these are minor issues for some that do not detract from the core game and would all but disappear with a few play-throughs / more familiarity with the cards.

To sum up then, all in all, I’m enjoying my dalliances with Thronestorm. It’s not a game that’s going to keep you entertained all day, but then, it doesn’t set it’s stall out to do so.

And it’s definitely one of my more enjoyable 10-minutes gaming experiences of recent times, especially for (at the time of writing) the princely sum of £15 (via the publisher’s site). If you do fancy something a bit different than ye usual two-player-card-game fayre, it’s well worth the look.

Now, where did I leave my Cardigan of Crumbs?