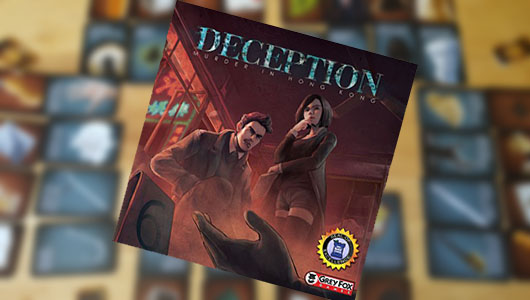 Despite being in the title, this game has precious little to do with Hong Kong. Fortunately, it does have a lot to do with deception and a bit to do with murder! Players take on the role of investigators but one murderous traitor is working against the group and trying to steer them away from correctly identifying them as the guilty party.

“I want your gun and your badge on my desk by the end of the day!” Yelled the angry stereotypical police captain. “Why!?! Because you’ve been bloody MURDERING people. In case you hadn’t noticed that is the exact opposite of what we are supposed to be doing here. And NO! Before you bring it up AGAIN, I do not think it is proactive to be giving us all more work to do. Before I fire you take yourself down to the custody sergeant and book yourself in!” The captain shook his head, “Honestly, you just can’t get the staff these days.” 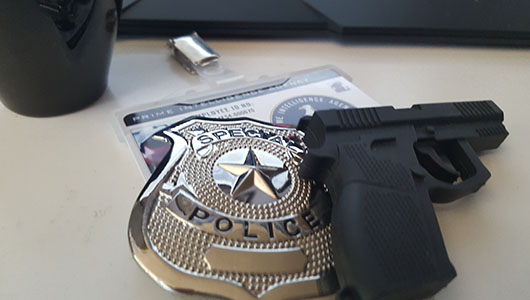 If this game wanted to change its name it could chase down the licence to Dexter: The Board Game. While one person will be identified as the murderer, another player also takes on the role of the Forensic Scientist (who essentially acts as the Games Master). Then, unless you are playing with the additional roles of Witness and Accomplice, everyone else is identified as an investigator. Roles are dished out randomly at the start of the game and it can actually be disappointing to be designated as an investigator as the other roles can be more fun.

The Forensic Scientist is the most active player that guides the rest of the team through the game. There are many similarities with other bluffing or social deduction games like The Resistance or Werewolf, particularly in the initial setup phase where the Forensic Scientist gets all of the players to close their eyes and then has the the murderer points out the key piece of evidence and the method of murder. All players have four of each laid out in front of them and it is best for the murderer if they can pick clues that can easily be muddled with the clues in front of players other than themselves.

The Forensic Scientist then tries to guide the Investigators to correctly identifying the murderer by selecting:

• The style of murder – for instance, “Blood Loss” if the murderer had selected a knife

• The location of the murder – which can be chosen from a selection of lists. It sometimes can be as crucial to know what was not selected in ruling out some options. So much so, that beginner players may benefit from reading through the other potential options.

•  Four (or possibly more) other factors – such as the victim’s expression. Chosen at random, these can sometimes be helpful and sometimes be so unhelpful as to actually mislead. 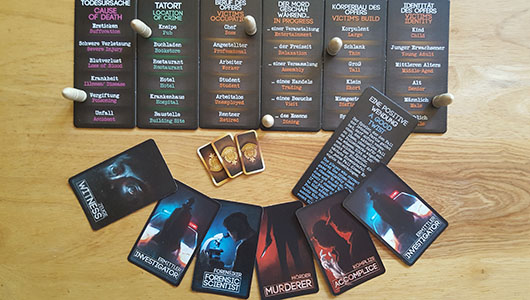 The order and speed in which these options are selected can also be clues within themselves. For instance in one game I placed two of the bullet tokens almost at once on “female” and “leg” and this lead some of the investigators to correctly conclude that I was trying to steer them towards stockings. The randomness of these can make some playthroughs more difficult than others, though sometimes the combination of options leaves you with nothing that helps guide your investigators. This is somewhat offset by the ability to change one of them out if all players have yet to use up their one guess tokens – but only after all the evidence has been identified and all players have had 30 seconds to state their case to the other players. However, as this is also chosen at random, it might not help and could actually exacerbate the issue.

The only other problem I had, is that despite the game saying that it can be played with 4–12 people I found that the real sweet spot was 6–8. The additional roles of  Witness and Accomplice tend to not add much to the game and when one of the possible suspects has already been eliminated from the group by being designated as the Forensic Scientist, eliminating more suspects tended to narrow down the options too much and make it too easy for the murderer to win by correctly identifying the witness. 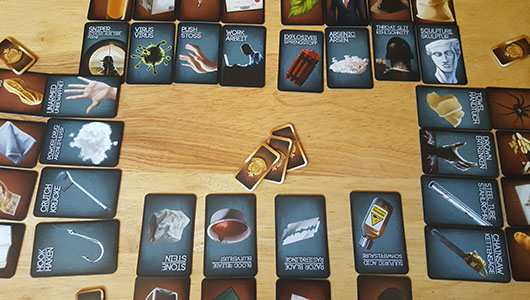 The components are of a decent quality and entirely functional but generally almost unremarkable. The wooden bullets may have been more authentic if metal but feel fine. Likewise the cards and boards that make up the rest of the game are fit for purpose without having any real noteworthy admirable quality.

I played with a variety of different groups that had various levels of experience with similar games, such as The Resistance. Every type of group tended to have a small niggling criticism or doubt but every single group followed it up with the question of; “Can we play another game though?”, with most groups playing a minimum of three games in one go. Always a good sign when people want to investigate another play-through.

A fun, quick to play hidden identity game that stands confidently alongside the usual suspects of the genre. The exact level of enjoyment may vary on a case by case basis and could very well depend on the quality of your fellow detectives and the evidence on display. This may sometimes prevent the game from delivering a killer blow but more often than not ends in a bloody good time.