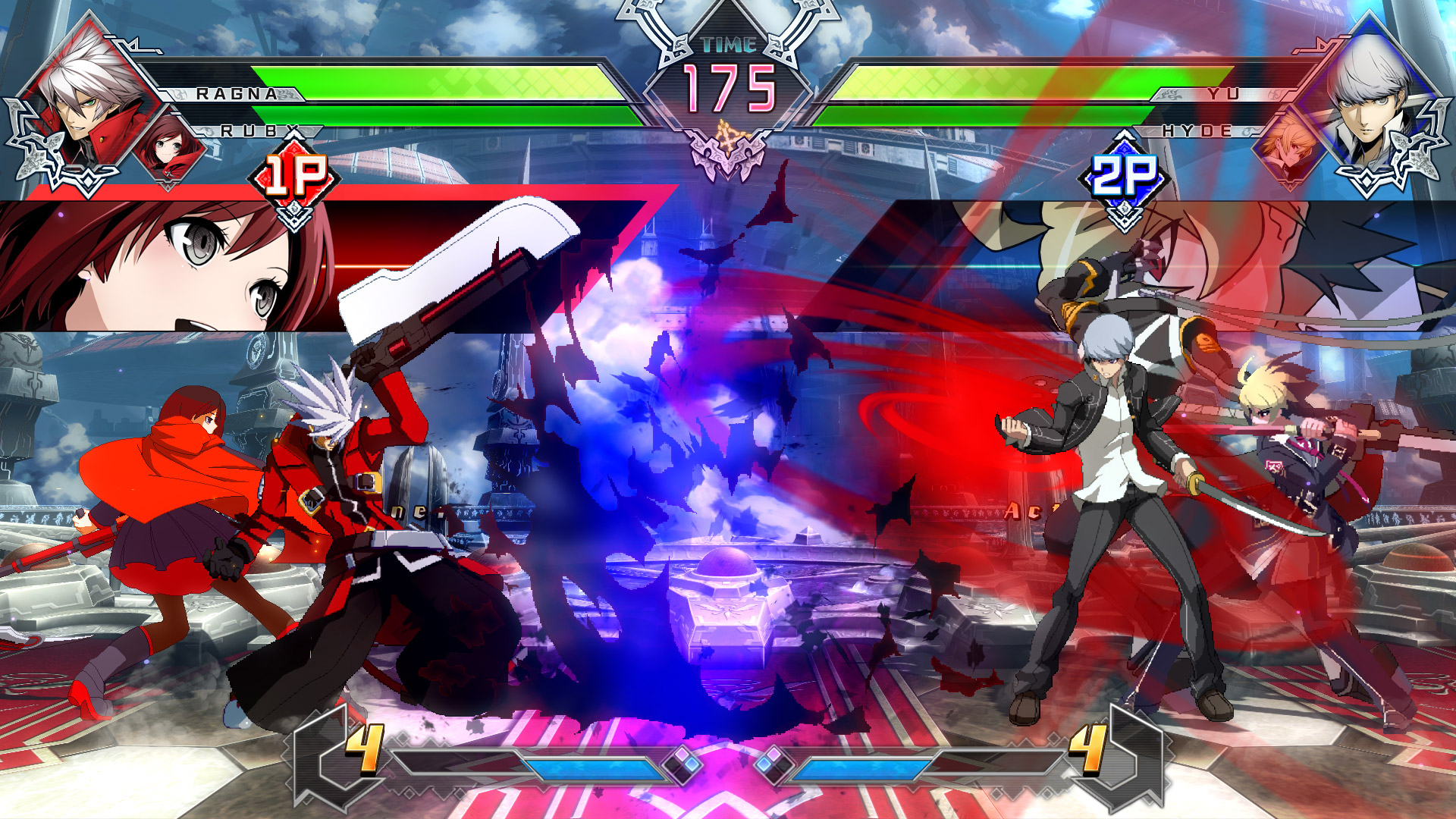 Arc System Works have positioned BlazBlue: Cross Tag Battle as a welcoming entry point for players new to their roster of fighting games, with simplified controls/mechanics, while also aiming to please fans of four unique franchises.

*Authors Note: I am playing on an EU copy which came out June 22 but the fan in my PS4 Pro failed right when my part of the country experienced a massive heat wave. Without a working internal fan or AC in my apartment I did not feel comfortable using my PS4 Pro until I could get it fixed. Apologies for the delay.*

Developer Arc System Works has a reputation for making some of the most visually striking and mechanically oriented fighting games. With a bombastic anime art style and some of the most skill intensive combat, they have carved themselves a tight niche and cult following within the fighting game community. When people talk about the most challenging fighting games it’s likely Arc System Works franchises such as BlazBlue and Guilty Gear will come up in the conversation. The developer has dabbled with slightly more welcoming fighting games in recent years with their work on the Dragon Ball Z and Persona franchises but for the most part, when people think of Arc System Works they think “tough.” Which is why BlazBlue: Cross Tag Battle feels like such a departure from the developers’ previous works; it’s a game seemingly designed specifically for players new to their fighting games with a lot of the high-end intricacies and difficulty they are known for toned down. 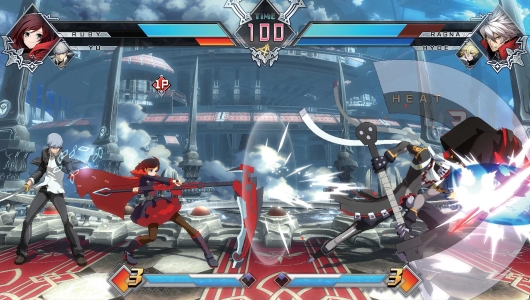 BlazBlue: Cross Tag Battle brings the worlds of BlazBlue, Persona 4 Arena, Under Night In-Birth and RWBY together under one roof. The story rationale for why all these characters end up fighting each other is pretty flimsy. A mysterious entity needs them to fight so it can take over their respective worlds. Or combine their worlds. Or something like that. Look, the story is a mess and makes even less sense than the already ludicrous storylines we’ve come to expect from fighting games. The story is showcased in the games Episode Mode with each episode focusing on one of the four franchises. Unfortunately, the story told is the same in each episode only from a different franchises perspective. On top of that, you’ll have to play the BlazBlue episode multiple times in order to unlock all the “endings.” I put the quotes in since even when you do see all the alternate endings you’ll still walk away scratching your head. Even for a fighting game BlazBlue: Cross Tag Battle’s story is bad. Which is not too big a deal since few people play a fighting game for the story anyway. 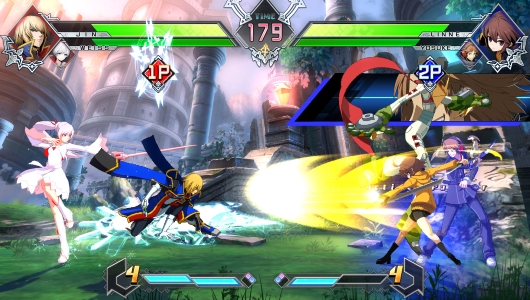 While the game won’t be winning any points for storytelling, on the presentation side of things BlazBlue: Cross Tag Battle is a visual and audio feast. The characters from all four represented franchises have never looked better. If you are a fan of anime-inspired art this game is for you. Even when the screen is exploding with action the characters all look distinct, colourful and fluid. It’s amazing how well Arc System Works was able to bring all four franchises together without any of them feeling out of place. I’d never played Under Night In-Birth but after seeing that game’s characters in action I had to chase it down. They all look so cool! Going in I was a bit worried Persona 4 Arena’s persona summons would look out of place but they fit right in with the wacky, over-the-top characters in the rest of the roster.

The real highlight though is Team RWBY, who has never looked better in a game or *gasp* on their own show. All four of Team RWBY’s members look fantastic. The English voice acting ranges from OK to great for the entire cast. The fact that Team RWBY was able to get the shows voice actors to reprise their roles really made my day. The last big highlight of BlazBlue: Cross Tag Battle’s presentation is the soundtrack. The game picked the best, most iconic tracks from each of the four franchises respective catalogues. Just like the visuals, the music from all four really does gel well together. 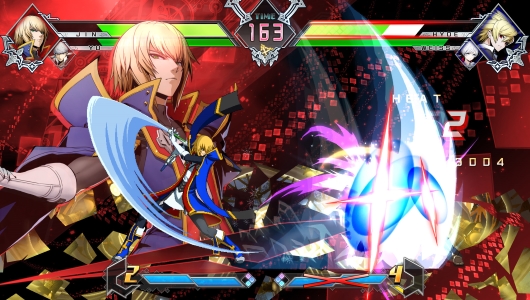 Even though BlazBlue is the headliner in this game all four franchises were given equal attention when it comes to the actual gameplay. Players familiar with the standalone entries from the represented franchises won’t feel completely lost when they boot up this 2v2 tag game for the first time. It may take some time to get used to the 2v2 tag mechanics but long-term fans should be able to adjust without much trouble. Especially since BlazBlue: Cross Tag Battle simplifies a lot of the complex tough-to-master mechanics/inputs the developer is known for.

There’s a noticeable attempt to make any character from the large roster easier to play by making a lot of their inputs behave in a similar way no matter who you picked. They all have light/medium auto combos, special moves, air heavy attacks, reversals etc that generally behave the same regardless of character choice. Which certainly makes it easier to play a game where you always have at least two characters move sets in your head but also robs each character of some of their individuality.

The game does introduce an intuitive and rewarding assist system (with an accompanying meter) that allows you to call on your partner character to perform things like close or long range attacks and incorporate them into an existing combo. The system works really well and can be a real life saver if you get caught in a tough situation. 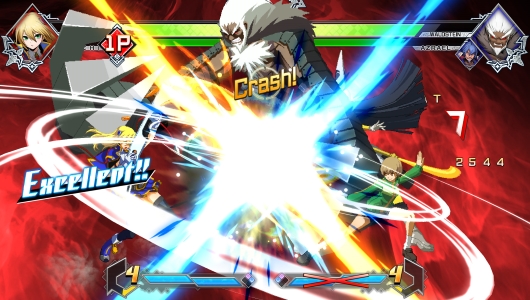 BlazBlue: Cross Tag Battle features two great modes that make this one of the most newbie friendly fighting games. Tactics Mode provides a fantastic and in-depth tutorial while Training Mode gives you an informative place to practice what you’ve learned. Despite not using GGPO netcode, online play is remarkably solid and I never encountered significant lag even when playing against friends overseas. Which is not to say I kicked lots of butt. It’s been almost a year since I last played a fighting game in earnest and it really shows.

It is unfortunate that the game only offers three Modes to actually play; Episode, VS and Survival. It would have been nice to have some sort of Arcade Mode at least; just to help round out the offering. Given how expansive the offerings in previous Arc System Works games, and those of their competitors, have been in the past it’s disappointing how little BlazBlue: Cross Tag Battle has to offer content wise. It’s also disappointing so many of the characters are available only as paid DLC given that they all appear as opponents in Episode Mode. Not too mention how icky it is to be asked to pay real money for different color schemes. 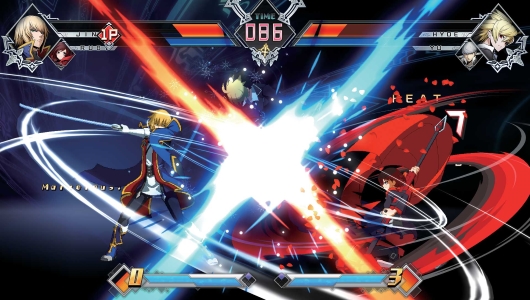 Tactics Mode provides a fantastic and in-depth tutorial. Training Mode gives you an informative place to practice what you’ve learned.
Wonderful roster of characters from four different franchises that compliment each other surprisingly well. Team RWBY steals the show.
A good entry point for people new to fighting games.
The story told via Episode Mode is generic, lazy, nonsensical and full of hollow repetition.
Some fan-favorite characters are only available as paid DLC despite appearing in the base game. Asking players to pay for more color options is still a gross practice in Japanese games.
The lack of gameplay modes besides Episode, VS and Survival really is disappointing.

Ultimately BlazBlue: Cross Tag Battle is a mixed bag. On one hand, it is the most welcoming fighter the developer has made in years and it serves as a great entry point for those new to fighting games or the Arc System Works family. The gameplay is rewarding and the mechanics work well. There is a great cast of characters that all compliment one another. But on the other hand, you have the terrible Episode Mode, lots of the characters are locked behind paid DLC and the game has nothing else to offer players besides VS and Survival Mode. I’m also not entirely convinced catering to new players will pay off or that the existing fanbase will support this game instead of just sticking with titles like BlazBlue: Central Fiction or Guilty Gear Xrd Rev 2.

BlazBlue: Cross Tag Battle is a solid title but it could have been a great one.