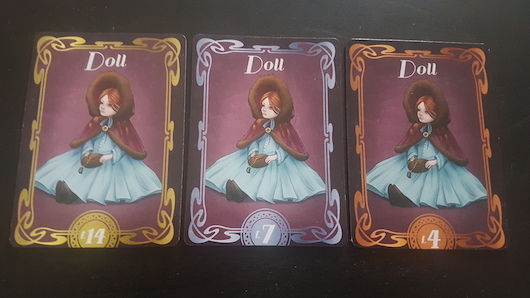 Unreserved is a handy-sized card game that attempts to deliver the flavour of antique auctioneering with a small side serving of collect-em-up. Currently in development from new-guys Physis Games, we were lucky enough to get our hands on a preview version, so bear in mind that the final offering may differ.

There Margery!… behind the elephant’s foot umbrella stand.  An eighteenth century Staffordshire sausage warmer!… Be quick!, there’s that awful man with the glasses again…

Partly inspired by TV’s “Bargain Hunt”, in Unreserved, players compete to make the most money over a fixed number of rounds, bidding on a range of collectibles (such as ‘Dolls’, ‘Artwork’ or ‘China’ etc). These are placed face-up showing final value, or more usually face-down, showing the card’s ‘peek’ cost.

Before bidding begins, players can pay the peek cost to, well… peek. Players then bid for each item in turn, with the highest bidder taking the item before starting on the next. Items come in sets with gold, silver and bronze versions of each with corresponding (decreasing) value.

This is the core of the game: players’ risk/reward bidding strategies with limited funds – and the uncertainties around that – i.e. cost to win an item vs it’s future value.

This aspect is further tweaked with an opportunity to bid on ‘action’ cards at the end of each round. These can be played at any time and influence or modify the bidding/collecting process in some small way – such as re-arranging items in the deck or peeking at hidden cards.

Cash is represented by a set of money cards. Each round players receive another (unexplained) money bounty (some rich old aunt perhaps?) with which to go crazy and bid all over again.

The eventual winner is the player with the highest portfolio value – their won items; bonuses for collections of similar items; and any unspent cash left over.

So how does it play?

There are certainly things to like about this game. In a Kickstarter world of games full of huge boxes, overblown minis and big name tie-ins, there’s something refreshing about a speedy dose of gaming fun that focuses on one main element and delivers it with a clarity of thought and simplicity of approach.

What should I pay to peek at? What would that leave me to bid on? Should I save any money for the next round? Should I push the price up for something I don’t want? What if I end up winning it and have to pay? And should I bid on an action that may or may not help me in the future? 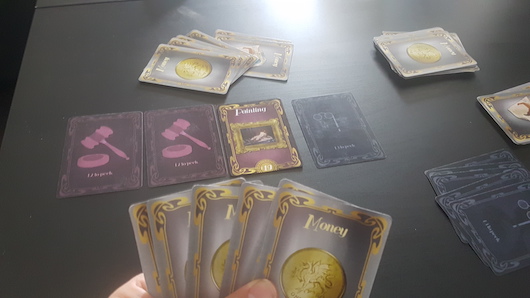 I certainly enjoyed that part in my first few playthroughs. Fitting in a pack of cards-sized box, Unreserved has a playing ‘feel’ that echoes many traditional card games: simple rules and objectives provide 20 minutes or so of a familiar, single minded, enjoyable distraction.

I liked that there’s nothing grand here, no big design. It reminded me of countless wet weekends in a North Wales caravan – times that games like these were not only ‘nice’, but essential to pass the time. It certainly fills that gap as a game “designed to engage and entertain both young children and adults”.

And yet for all the rose-tinted nostalgia, even simple games have moved on a little since those days. Which means there are a couple of things that make me feel like Unreserved’s particular bun needs just a bit longer in the oven…

For example, the artwork is well-done: great at setting mood, reflecting theme and a period feel – but an opportunity to further tailor the bronze, silver and gold artwork of each card type seems to have been missed.

If this is a bidding game with a collecting element (and especially for younger children), why not further reinforce those visuals? (E.g. progressively fancier clothes for each fancier doll, grander design for each piece of furniture, etc). Similarly, the action cards all use the same unvarying artwork too.

And yes the action cards do provide an engaging and additional bit of interest for each player to influence tactics and outcomes around the core bidding mechanic. Yet because the pay-off comes solely at game-end, it’s hard to get any feedback on your bidding success or otherwise as you play. What keeps me invested and engaged through the rounds? 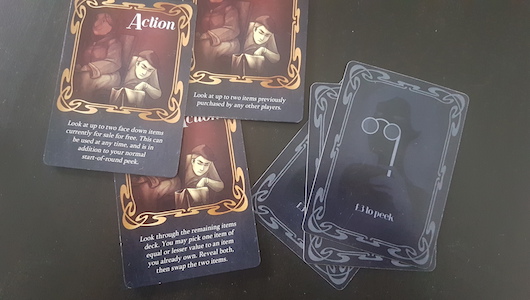 And whilst I applaud the small box, that turns to frustration with both the instructions’ legibility (even with glasses on) and the clarity of explanation.

Players seem to be allowed to bid beyond their means (it’s not explicit) even when they can’t afford an item. Any yet whether to show or hide a player’s cash (cards) doesn’t get a reference at all – an aspect that obviously influences all players’ bidding strategies or sneaky overbidding attempts to hike the final price.

It gets worse: it seems woefully easy to exploit the bidding risk/reward element. Players that overbid and cannot afford an item after winning the bid are penalised a set £5 (if they have it), with the item then removed from play.

That creates a perfectly legit-seeming strategy of bidding up the price of every item above its value, denying it to all others when it is removed (when you can’t pay), with the only consequence to you a loss of £5 – or less if you’ve already spent up! with no lasting consequence. (Players always seem to receive their cash windfall for the next round).

And once one tries that tactic, everyone quickly follows. Cue: crippled game, silent rage and board flip.

Yes, an easy fix could be to force players to sell their previously won items to raise funds. Or another would be to pay it from the next round’s windfall bonus. However as it stands, it’s an exploit that once appears, seems guaranteed to end every game faster than you can say “Mayfair… yes that’s mine. With one house and four hotels”

In summary, I do hope there’s some more finessing to come for Unreserved to become as tasty a morsel as it could be. And if only to make sure that some ruthless ten year-old, sat in a caravan, with the rain sleeting outside, still has someone left to play games with.