A fast-paced racing game set in a colourful sci-fi world straight from the best cartoon that never existed, Trailblazers is exciting and silly in equal measure.

Although it appears on the surface to be another pretender to the Mario Kart throne, Trailblazers is more interested in being its own twist on the cartoon racing genre. Rather than being every racer for themselves, you work in teams to lay down tracks of coloured paint to keep your allies at maximum speed. Driving over paint of your colour accelerates you, meaning the players at the front leave behind boost tracks across the optimum routes. Of course, the enemy team is trying to do the same to you, which makes things significantly more complicated.

You have a limited amount of paint you can deploy, either laying a trail behind you like a neon snail or firing it ahead to cause your opponents to spin out and temporarily lose speed. The catch is that you can only fire your paint attack when the bar is full, so you have to choose between passively aiding your teammates as you go, or taking out the competition when the opportunity arrives.

With several teams all competing to score the most points and reach the finish first, the map is quickly coated in overlapping streaks of paint. This means each lap changes the entire layout and strategy. Taking on the computer is difficult enough, but to stand any real chance in a race against actual humans, you need to be able to work closely with your teammates, laying paint exactly where you need it, either to help yourselves or mess up the enemy’s careful planning. Trailblazers has online and local multiplayer, whether you prefer to be within shouting distance of your teammates/foes. Either way, it is a fast, fun and frenetic experience. 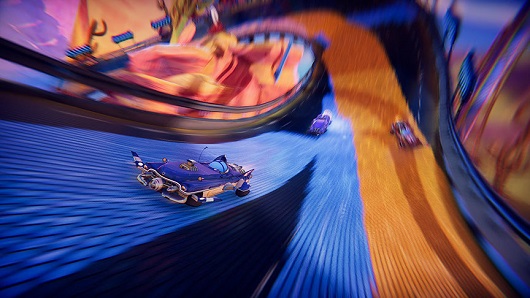 There’s also a full story mode, which might actually be the most charming part of the whole package. You step into the shoes of Trailblazers’ colourful characters, each with their own distinct personality and agenda, through increasingly difficult challenge races amidst a backdrop of a intergalactic racing championship overshadowed by espionage and political intrigue. The story is surprisingly involving and a little darker than you might have expected from a game like this, while still serving the Saturday morning cartoon aesthetic.

All the your favourite character archetypes are present: Optimistic Newcomer, Driven Loner, Anxious Frog and many more. There’s no voice acting, instead the dialogue is given via text accompanied by Banjo-Kazooie-style nonsense sounds to simulate conversation. The sounds do get a little annoying in the longer exchanges but the actual conversations stay entertaining throughout. There were a few genuine laughs provoked at unexpected twists, and my preferred choice of racer is definitely influenced by how entertaining they were in the story mode. 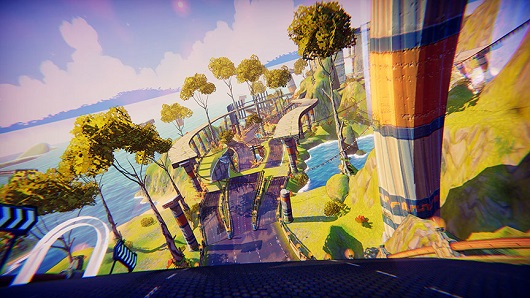 It’s not just the writing that overflows with personality, the designs are also stellar. Each racer has their own unique vehicle which makes them easy to identify at speed. The tracks are also bursting with personality, each one feels different from the last, although once you reach maximum speed it can be a little difficult to see exactly where the turns are coming from. Music is just as bright and upbeat as the visuals, so at least you’ll be nodding your head as your racer rockets into a barrier at the speed of sound.

Trailblazers is a clever game that takes a few simple steps to make something new in a genre that’s been around for decades. If you have a few friends to play locally with, it’s well worth it and even if you can’t reach anybody over the Internet, the single player is more than worth your time, if you’re a fan of cute cartoon amphibians and bending the laws of physics to breaking point.