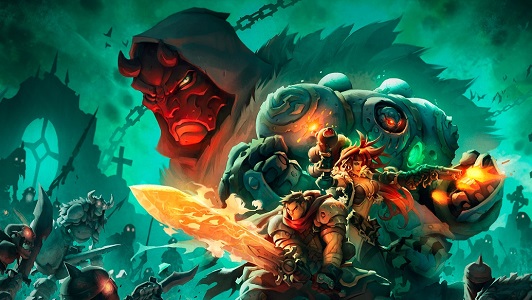 Based on a 90’s pulp comic book series and developed by Austin indie studio Airship Syndicate, Battle Chasers has been kicking around on consoles and PC for almost six months. Flying well under the radar of other AAA titles though, it finally sees a release on the Nintendo Switch this week; so now is the perfect time to look at Battle Chasers: Nightwar and why it stands out.

Nightwar is an interesting mid-tier title, formed by ex-Vigil game staff, not least because it straddles the middle ground between a turn-based role-playing game and puzzle adventure. Set in the tone of more classic RPGs like the earliest Final Fantasy games, it is a refreshingly western take on the genre, with modern, simplified mechanics and lushly painted, isometric levels that immediately draw parallels to the award-winning Bastion. Battle Chasers: Nightwar is addictive, works well on console at a higher resolution and yet is clearly going to be a perfect fit for the small form factor of the Switch.

Personally designed by Joe and Steve Madueria, Nightwar is rooted in the Battle Chaser comics which were created by Joe Madureira in the late 90’s. It follows the adventures of a band of unlikely characters including the young girl Gully, her fem-bot bodyguard and Battle Tank Calibretto, Knolan, Garrison, Alumon, a daemon hunter and none other than the sultry and overtly sexualised Red Monika. 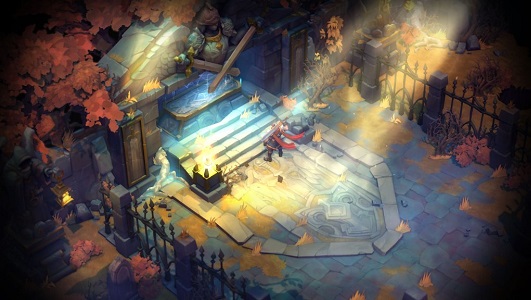 Yes, the notoriously buxom Red Monika (as related to Red Sonja) is wholly playable in Nightwar but thankfully developers Airship Syndicate have eschewed the potentially adult nature of the character to create something slightly cuter at least in the player model and move set. Googling either character is risque at best and yet it’s nice in 2018 for a developer to simply be out and out with both the art and animation of what is supposed to be a highly sexualised and somewhat naked character and with no apology.

Battle Chasers is played across three different modes that generally gel together and showcase the array of excellent artwork and music that have gone into development. Dropped onto the mysterious Crescent Island, players initially have control of only 3 characters, controllable in the over-world map. Players literally run around the map of the world from point to point collecting resources, and from there, can either engage in battles, enter exploration zones and dungeons or visit the main town.

Despite what appears initially to be a rather large map, the world is not huge, broken up into zones that range from classic fantasy to steampunk, desert regions to the obligatory snowy regions. Whilst somewhat cliché, each area of the map allows players to then enter zones and dungeons that are uniquely stylised with themed characters and plenty of battle on the way. 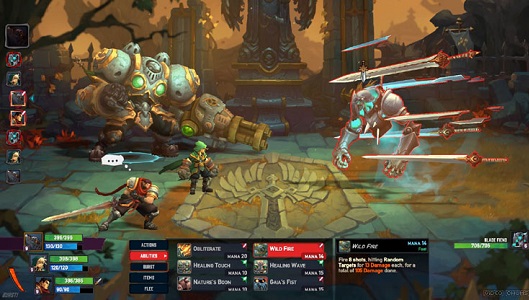 Secondary from the over-world is the exploration zones and dungeons. Set as ‘tiled’ isometric 3D rooms, these are open areas that allow the characters to move freely, use one of three abilities that buff them for battle and then, once again, engage in combat or discover loot. Some areas have higher level enemies and gear, some areas have boss battles and unique encounters but all in all, players are free to revisit any exploration zone, replay them and level up.

The “dungeons” are the areas where the main story-line takes place as your adventurers are sent to different villages, towns and regions that play out as challenge dungeons with the same isometric 3D layout. The main difference being that they are challenge zones set at a specific difficulty when entered, with different tiers of reward and capped enemies. If the party dies then players are booted back to town and have to run through the map and re-enter all over again. At the highest levels, the dungeon resets all the enemies, making it a grind and a repetitive challenge to clear all the rooms and ultimately defeat the end-boss for that chapter.

This highlights one of the aspects outside of fighting that sets the game apart from other RPGs or even JRPGs. The traversal of procedurally-generated rooms in the dungeons, the loss of gold when dying, the single town that you have to leave from each day to visit dungeons, combined with the crafting and the room to room layout of dungeons means Battle Chasers has a little bit of a rogue-like feel to it. Thankfully, the fighting and combat is satisfying and interesting enough to make up for the number of times your party will wipe out at the hand of higher level enemies and grinding. 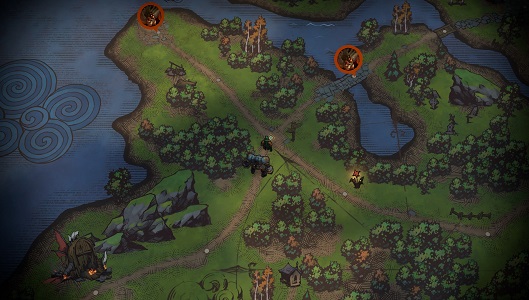 The final component of play is the actual combat, which takes the form of turn-based fights on a 2D plane against one or up to 3 enemies. Sometimes there will be ‘stacks’ or rows of enemies and sometimes other enemies will keep summoning new ones to battle but general mechanics are as simple and samey as many mobile turn-based fighters that pervade Android and iOS.

Out of the five playable characters, only 3 can form a party at any one time and enter fights. Buffs applied during dungeons or adventuring will carry over to enemies and players in battle and otherwise, it is a simple task of taking it in turns and balancing characters health with consumption of mana to cast spells, moves, debuffs, critical hits and defensive stances. Fighting is the core of what makes Nightwar so appealing but also worth playing, as truthfully there is not much else to do in the game. Yes, the game is beautiful and the soundtrack enticing but the overall story is basic and shallow, with animations and cut-scenes scarce.

Learning the pros and cons of each character and building them out with unique and specialised armour as well as trying different combos of three players is deep enough and rewarding that it becomes addictive to have ‘just one more fight’. The best incentive as well is that Airship Syndicaisare generous in rewarding players for doing… just about anything. Every level of each character unlocks something and just as you think you have seen it all, the game suddenly introduces special abilities, super moves and extra skills to try out. Characters can be trained in town and there is an arena mode to find and try for more loot and money that has a never-ending wave of enemies. 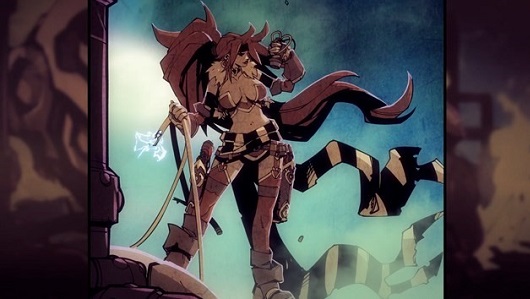 Battle Chasers is a game that rewards players for playing it. Every new character level unlocks something new to add to your skill set and new quests and abilities to learn in town. The story itself is linear and unlike many RPGs, the game is not really open world. Many areas are locked off until later and the higher levels are impossible until characters have reached them, making the story very linear and the game to be played in a certain order.

The game does come with a few lingering issues, that come about from it being an indie title that was kick-started for funding. Despite the engaging battle system and wonderful visuals, the game is lacking in content and although long is a bit repetitive. On the one hand, it is refreshing that it doesn’t come with any micro-transactions and pay to play options, and yet would do well to have more mobile-like elements including daily quests, leader-boards or seasons events.

Mercifully it hasn’t found its way onto mobile and is not being milked for pay to play even if the combat is so obviously similar to other titles in that market, where paying for extra lives and energy is so prevalent. Balancing is a bit off in the game, as for the most part, it is a very quiet, easy to play game that is both gentle and relaxing. The combat though and the dungeons even on the lowest level are hard, and unless characters are 1-2 levels higher than the enemies, will die and die again, slowly grinding to reach more health.

Damage within combat is relative to the amount of health you have, despite debuffs or armour and the more health characters have the less damage enemies do. This is odd as it skews some of the gear available in favour of stamina. Crafting, such as it is, is also confusing and a bit convoluted as it involves so many different ingredients, but crafting stations are not readily available instead found inside dungeons halfway through or at the most illogical and inconvenient locations. 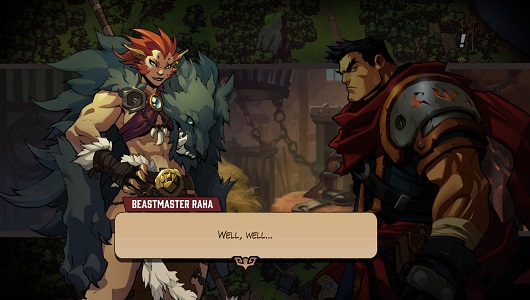 Fishing as a side activity in the game is wholly boring and unnecessary and seemingly bugged, as the 3D marine animals (of which there are so many different varieties) are like magnets to your rod and will stick to it, whether you have a high enough level fishing rod or not. This makes the activity itself next to useless, with no indication of what “level” fishing you are walking into.

What justifies the $40AU the game is priced at, besides the lengthy and addictive campaign, is the sheer amount of artwork, love and attention the game has clearly received. Recreating the tone and art of the Battle Chasers comic, all the special move transitions, cut-scenes and dialogue are told through comic panels and speech bubbles. As a robot, Calibretto also has her own font and speech visuals. Even at 4K on a large TV, the animations look sharp, with the resolution of the rich, dark backdrops still holding up. References to WarCraft are not subtle, as a number of high profile artists have come from Diablo III backgrounds to work on this game.

The story unfolds through incidental narratives and whenever you rest in town overnight. This builds the personal story of a young girl and her quest to find her father. Arguably Nightwar could be the turn-based cousin of Diablo III if it didn’t present so differently and play more like a classic JRPG in story design.

Beautiful artwork, painted visuals and soundtrack
Classically-inspired, procedurally-generated western JRPG elements
Satisfying game-play and character levelling
Could use extra content, like daily or seasonal events
Game balancing between exploration and fighting is a bit off
Difficulty curve could put off casual players

All in all, Battle Chasers: Nightwar is a hidden gem and pleasant surprise. As gamers head into the middle year and may be looking for something to tide them over, Airship Syndicate is one to watch and have created an addictive RPG that gets better the more you play it. The instructions for gameplay and tutorials are slim to none, but the lush compendium and bestiary of characters, enemies and creatures to collect, learn about and battle makes Nightwar one to chase after! 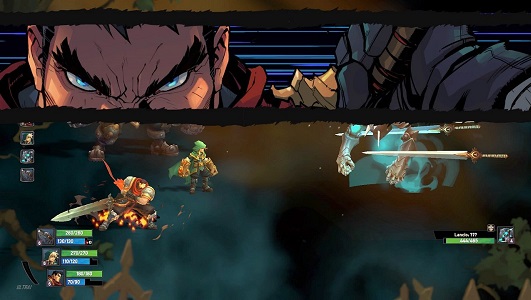 The review copy of this title was purchased by the author.
Official Battle Chasers:NightwarGame Site