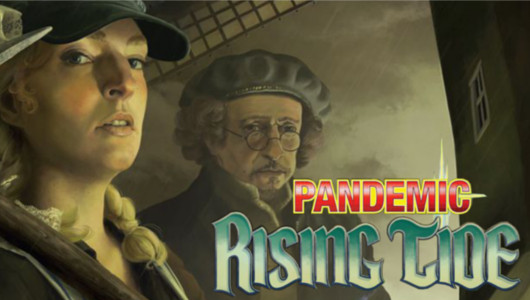 What started as a trickle has become a flood; a raging torrent, sweeping across the land. I am, of course, talking about Pandemic releases, of which Pandemic: Rising Tide is only the latest. But rather different it is too, as no longer are you worried about sniffles and strange bodily fluids. Now you’re fighting back the flood waters as sea levels rise, reclaiming land and building dikes. And even more unexpectedly, you’re Dutch.

Known for their tulips, windmills, and recreational drugs, the Dutch have also been in an on-going war with the nearby North Sea. Most of the Netherlands is reclaimed land; that is, lowlands drained of water and made habitable. But the titular Rising Tide is going to re-reclaim that land if the water can’t be kept out. The weapons to hand? Hundreds of kilometres of dikes, those famous windmills, and a map of incomprehensible place names. 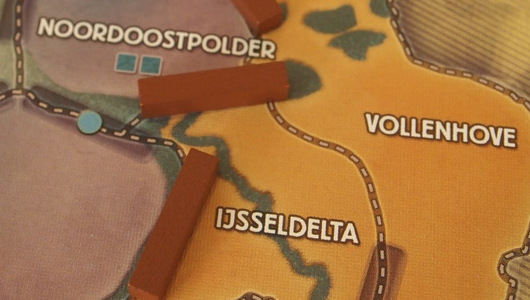 I’m sorry, my ignorance shouldn’t be a joke. But an unavoidable part of any Pandemic is discussing where to go, what to do, where the threats are. Dutch is one hard language for non-native speakers to discuss in. You’ll spend as much time tripping over place names as you will actually talking tactics; which is funny or infuriating depending upon your disposition. It also leads us to even bigger issues of communication: between you and the map.

Pandemic has always required clean graphic design to help you see how everywhere is connected. In Rising Tide, that is even more true because of its main behavioural difference: water and flow. Large piles of water cubes will naturally ‘flow’ into neighbouring regions (adding extra cubes to them) if the boundary between those regions is not blocked with a dike, as surely as the carelessly struck pint will spread a watery doom across a cardboard covered tabletop. Which means you need to be able to clearly see which regions connect where and whose dikes are protecting what. And… well. 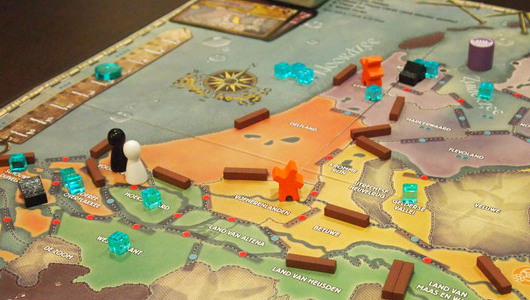 The graphical choice to keep regions close to their real world, wiggly, counterparts makes for a pretty board but one that is ultimately a little difficult to use. Certainly in early plays. Learning how to predict how water moves across the board is challenging enough without throwing a network comprehension test into the mix. Figuring out the weak points in your defenses before they are spilling sea water all over your tulip crops is a challenge made more difficult by this map. Though, I suppose, it’s still easier than the 19th-century experience.

The Dutch are not a people that forgive mistakes and neither does Pandemic: Rising Tide. As with all Pandemic versions, the situation is made worse each round by drawing a given number of Dike Failure (infection) cards that each cause a location to degrade. Here that means removing a dike from its border or, if they are completely sans-dike, adding a water cube. But it’s that flow that will really get you. After that usual process, you flood regions that have a neighbour with two cubes more than them. 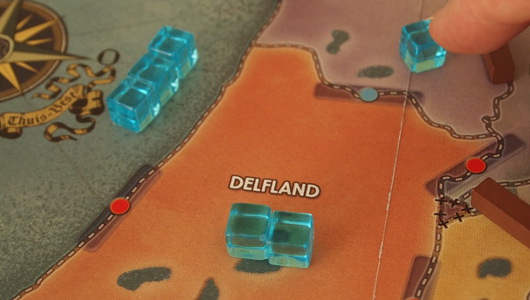 The most impressive destruction comes, as you’d probably expect, from the sea. While the sea starts as a 2 cube region (no, you can’t drain it, be sensible) that level will rise over the course of the game to a dizzying 4 cubes. A single hole then will put 3 cubes in a region, all of its unprotected neighbours would then go up to 2 cubes and all of their dike-less neighbours will need a cube too. This happening at the wrong place at the wrong time can be absolutely devastating and the game can and absolutely will turn on a twist of fate like this.

Of course, you left that area at risk, so let’s not pin all our criticism on tricksy fate. But this is where you should be spotting those areas where the dikes have eroded away and get in there to construct some more. You’ll have to drain the water cubes first, mind, and it might take you a while to walk (wade?) across the landscape to get there. Fortunately, you have two new structures you can build in Rising Tide. Ports and, excitingly, windmills! 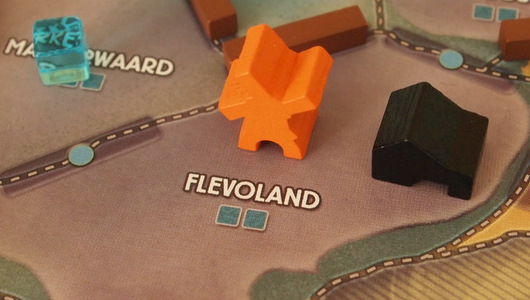 In this liquid landscape, ports provide fast travel routes. You can just teleport straight to a port. The windmills not only provide great backdrops for tourist photos, they also help pump water. Every turn each of your windmills will remove one water cube but only from regions you can trace a path to without crossing dikes. Which makes for an interesting twist on your schemes: you want to keep paths open for the windmills but closed to prevent flooding. How you handle this across the entire map is interesting and, again, made difficult to see on the board.

Rising Tide is a very different Pandemic, but still has that classic core. The player deck seeded with “epidemic” (storm) cards, the collect 5 of a colour to do a thing (cure a disease/build a structure) that wins the game, the relentless infection/tide deck, a mix of player powers to try out. It is familiar and yet the way your watery foe expands via flooding, the opening and closing of paths based on where you place and remove dikes, is very different. There are opportunities to make better decisions in just which dike you select for removal when demanded by the tide deck, and that makes every part of Rising Tide a deliberate and careful process. 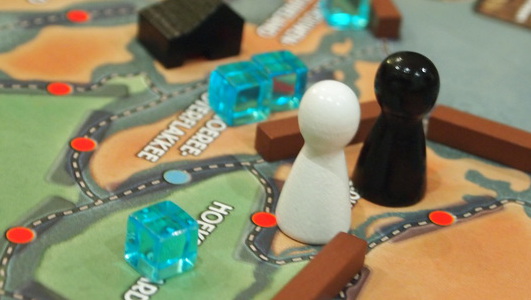 In many ways, it reminds me of Pandemic Legacy Season 2, its core gameplay rather than the Legacy elements. It feels a lot like they were developed in parallel. They are both about keeping something on the board, in this case the dikes, rather than always removing the disease cubes wherever they appear. It makes for a familiar yet different puzzle. One that requires a more careful evaluation of the entire board, rather than just beelining for the highest disease concentration. Not everyone will find that the easiest or most satisfying kind of puzzle. But I certainly do!

Classic Pandemic gameplay with great twists
Loving the unexpected theme
Super challenging
Graphical choices make the game harder to play
It can all go wrong very suddenly, which can be anticlimactic

I’ve always enjoyed Pandemic and Rising Tide is no exception to that. I love that they’ve gone in such an unusual direction with it, I mean, sea levels and flooding? It’s a unique theme, historically interesting, and a topical comment all wrapped into one. While Rising Tide probably won’t change your mind if you don’t care for Pandemic, and it’s not as immediately accessible as other editions, it is a welcome addition to the Pandemic family! I for one hope they continue to show this much imagination with future releases!