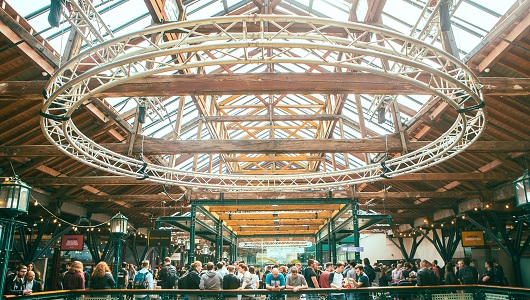 This year’s EGX Rezzed has been and gone, with numerous games played and previewed by our team there. You can hear our thoughts on many of these titles on the latest BRB UK and Geek Speak podcasts, as well as read our impressions on Disco Elysium, PHOGS!, Wargroove and many other articles. In order to cover even more titles, we thought a roundup article was in order… so here it is! 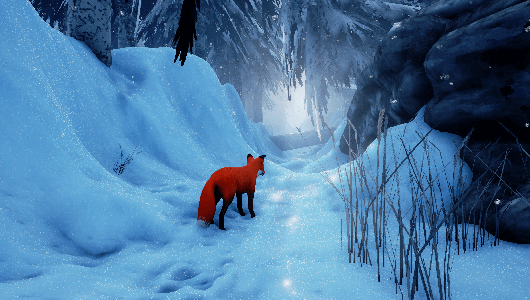 This Dead Winter is an adventure game by Kindred Games. You are a bright red fox in a dark snowy forest. A wintery spirit has taken your cub and you must embark on a perilous expedition to rescue her. The forest itself is stunning, coupled with the sound design, it gives a sense of loneliness and sense of dread.

The modelling, development and coding have all been undertaken by a single person – Rob Potter. Only the sound design and some of the initial concept work had an outside influence. The game has only been in development for a few months but it looks promising. There are similarities to Journey and Abzu, with sound and environment telling the story rather than subtitles and dialogue.

Despite being in its infancy, This Dead Winter plays really well. The controls are simple to grasp and the challenges aren’t as obvious as they first appear. Rob explained he was showing it at Rezzed to test how well the little fox does, as well as speak to people to gauge their enjoyment. The game had a consistent audience and there was always a queue to play when I went over so I think it was more than just me who loved the adventures of Foxy McFoxface (not the actual name of the fox).

No word on a release date yet, however, be sure to follow @ThisDeadWinter on Twitter for updates on this. 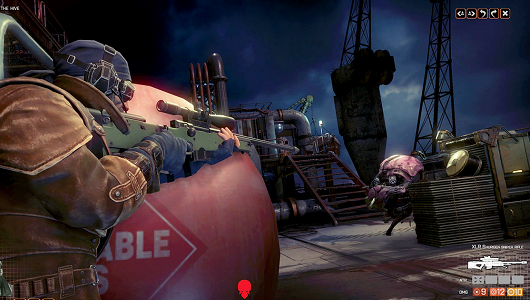 A turn-based strategy game where you fight against hordes of alien invaders – if you think that sounds more than a little bit like X-COM then you would be more than a little bit right. Julian Gollop, the creator of the original X-COM, founded Snapshot Games and after initially releasing Chaos Reborn, is returning to the fight against the extraterrestrial menace with a spiritual successor to X-COM.

Not only is it close in theme but also in execution – you would be entirely forgiven for mistaking a screenshot of one for the other as the graphical style and UI design is remarkably similar. However, there are some major departures and additions. The combat still involves many familiar elements such as Overwatch and a defined area you can run and gun in but one of the major additions to combat is the ability to highlight and target individual body parts which in turn had different effects on the enemies targeted. This was most noticeable in the larger bosses, where targeting a leg limited movement and destroying her head seemed to make her worse at targeting my squad.

Rather than arriving in alien spaceships, these creatures mutated from creatures on Earth after the melting of the polar ice caps released an extraterrestrial virus named Pandoravirus. This results in a myriad of creatures described as Lovecraftian in nature, but from what I saw a better touchpoint would be John Carpenter’s The Thing. This has a profound effect on gameplay with the mutations of a creature you are facing leading to procedurally generated creatures that could also mutate to include captured weaponry if they defeat you or undergo a hyper-condensed state of natural selection that sees them rapidly evolve new ever more deadly skills. Sounds challenging but will obviously need to be carefully balanced so that it does not see a snowball effect that overly punishes new players – as this could often already happen in the original X-COM.

There has also been talk of wide-ranging tactics of the global strategy needed. For example: “Players can exploit the conflicts of other factions through kidnappings, sabotage, assassinations, and military coups”. This sounds intriguing but there was understandably none of this in evidence in the demo available at Rezzed. 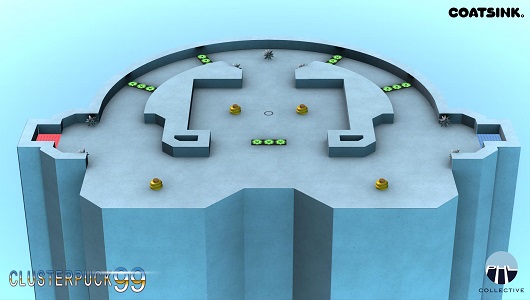 ClusterPuck 99 is a multiplayer ice hockey-like sports game developed by PHL Collective and published by Coatsink. The game supports up to eight players but the demo I got to play at EGX Rezzed was limited to four on a Switch. However, even at that number, the game was hectic, frenzied and fun.

The premise is incredibly simple – you score by hitting the puck into the opponent’s goal. Your basic controls allow you to move with your analog stick, hit the puck (or use a charge shot by holding the button down) as well as jostle it from your opponent’s possession. This simple concept is easy to pick up but you will need to master the in-game physics to ensure you can beat any challengers.

Where things get complicated is in the layout of the arenas you have to navigate. There are countless obstacles and power-ups to contend with, including spikes, bumpers and speed boost pads. Once you have possession of the puck, you may decide that using the on-field pads will propel you more quickly to the goal but it may be close to a wall of spikes too. If you misjudge your proximity to a bumper, you could be pushed off the arena and have to reset.

As you might imagine, ClusterPuck 99 feels like it will be at its best when you are playing with friends, though the game does have single player modes available, like a challenge mode and an arena creator mode.

Currently, the game is available on PC, Mac, Xbox One and Nintendo Switch so if you feel like you need a new competitive arcade-like sports game in your life, try it out. 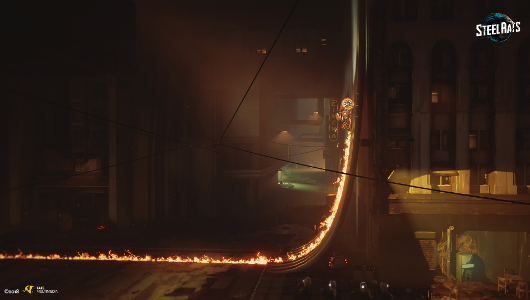 Taking place in a post-apocalyptic wasteland, Steel Rats tells the story a world taken over by robots – though you should image less Horizon Zero Dawn and more Terminator Salvation as a visual reference. Just why have the machines risen up against mankind and who built them? Well, we don’t know but a small gang of bikers intends to find out.

What transpires is an excellent blend of platformer, side-scrolling beat em’ up and physics-based motorcycle riding (Super Trials of Rage?). This style of gameplay makes Steel Rats seem like it would have been right at home in the 360-era Summer of Arcade, and that’s not to say it’s dated but actually has the potential to be a timeless classic.

Based on a 2D/3D plane, you can ride further into the background or towards the screen to avoid obstacles, quick turn on a dime to change direction and then there’s the action button (which is where the fun begins). Spinning your hog’s front wheel furiously, you’ll have the ability to cut through random wreckage, abandoned vehicles and enemies in a buzzsaw style attack… something I found incredibly satisfying. This function will also have other abilities that will serve you well, including climbing walls whilst (optionally) pretending you’re Ghost Rider.

Currently expected to release sometime in 2018, you should look out for Steel Rats on PC, PlayStation 4 and Xbox One. 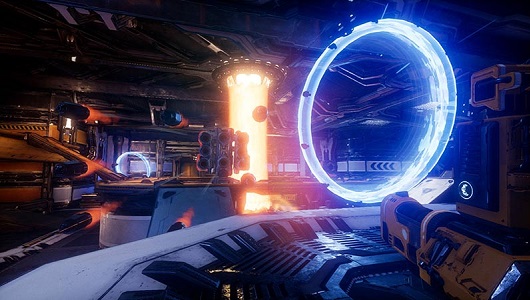 One of the first games I played at Rezzed was MOTHERGUNSHIP, an arcade shooter by Grip Digital and Bad Posture Games. I loved it so much I had to go back a handful of times. It’s premise is straightforward – get aboard an alien ship, shoot the aliens with colourful lasers, blow up the ship, save the world. The game reminds you of this as well when the commander says “you’ve had at least 3 days of training, this should be easy for you.” He is also a frog by the way.

Crafting your weapon at workbenches is where the game stands out. There are three attachments types: connectors, barrels and mods. The only limits are imagination and space (obviously, nothing can intersect) – as long as you have enough connectors. The first weapon I built was a tightly-compacted mess of connectors around one large rocket launcher. The problem with this was I couldn’t attach anything else as everything was blocked by the rocket launcher.

The next attempt had a bit more thought put into it. I managed to fit a few more barrels and mods to it, which made clearing the next few rooms a bit easier. Each barrel and mod have an effect on movement, speed and how much power each shot uses. This was my downfall.

The boss fight in the demo was a Pit Crawler, picture a giant tunnel boring robot. There were two phases to this fight: run away as it charges you, and shoot it with all the guns as it melts the door. My perfect weapon had one flaw; each shot had a considerable amount of recoil, meaning my character was flung back after firing. As the boss is melting the door, the player is backed against it. So every time I fired, my character shot back, bounced off the door and flew forward into all the drill parts of the boss – killing me.

With the vast amount of combinations for weapons and attachments, I’m really looking forward to playing again, hopefully with better results.

Did you attend EGX Rezzed this year? If so, what games did you play and enjoy? Let us know below or on Twitter what we missed and we will see if we can remedy this at EGX later this year.