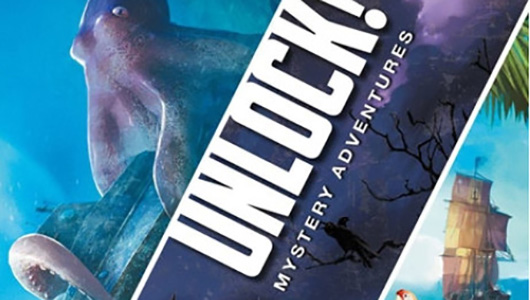 Unlock! Mystery Adventures features three “escape room” scenarios that are presented in the form of a visual card-based, app-driven adventure.

Unlock! Mystery Adventures features three “escape room” scenarios that are presented in the form of a visual card-based adventure. The scenarios are all wildly different from each other. Aside from the tutorial mini-adventure, players will find themselves trying to escape from a haunted house in “The House on the Hill”, trying desperately to navigate their way out of a stricken steampunk submarine in “The Nautilus’ Traps” and, finally, trying to locate Captain Smith’s hidden treasure in “The Tonipal’s Treasure”. 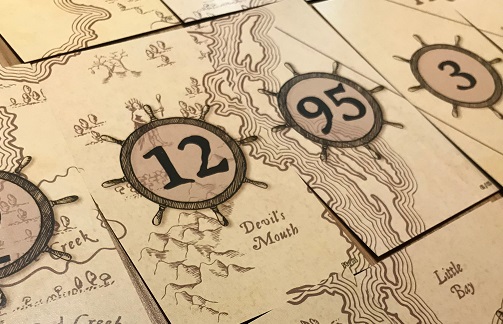 I have never attempted one of London’s many real-life escape room games, but I am broadly familiar with the concept, which is replicated in the game. Players have to work together to solve a number of puzzles, each of which leads to a new one, against a strict time limit.

Starting with an opening scenario card and a location, the puzzles appear in a deck of numbered adventure cards, some of which represent other locations with objects to examine, while others represent items of interest. If you attempt a solution, such as by combining items into something more useful, you add the card numbers together and draw the corresponding numbered card from the deck, rather like flipping through the pages of a Fighting Fantasy book. For more intricate puzzles, the players will receive a code which needs to be entered into a “machine”. This is managed in Unlock! through the use of a dedicated phone app, which is used across multiple Unlock! sets. If the code is entered successfully, this will generate some new card numbers to draw from the deck and progress through the adventure. If the code is incorrect, time will be deducted from the players as a penalty. Some of the cards will also contain hidden visual clues, while some act as red herrings and deliberate time-wasters. 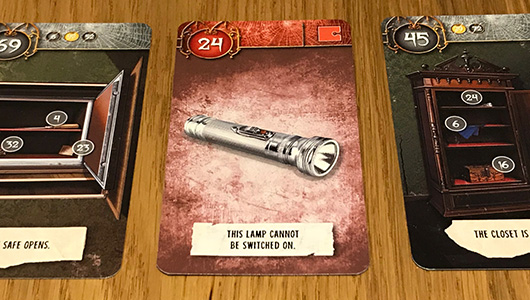 Cards in Unlock are individually numbered, leading you to new areas and uncovering new items to explore.

After working through the excellent opening tutorial adventure, which does a fine job of explaining all of the game’s core concepts, the three main scenarios are presented in ascending level of difficulty. Unfortunately, we found that the quality also varied quite wildly. Without giving too much away, we found that “The House on the Hill” was by far the best scenario and most enjoyable, combining all the elements of a great puzzle adventure with hidden clues, logical puzzles and a realistic time limit. The atmosphere created by the app sound effects and the superb artwork made this into a classic horror story for us in which we were the lead characters.

Despite being billed as the “medium” scenario, we found “The Nautilus Traps” to be by far the hardest, with a harsh time limit beginning at only 15 minutes, a deliberately cruel and unnecessary trap on the opening card and puzzles that seemed to make little sense at times. The artwork is, again, superb and I really enjoyed the theme of exploring the sunken submarine from 20,000 Leagues Under the Sea, but the overall game felt like a mess. The third scenario, “The Tonipal’s Treasure” was a pirate-themed adventure involving a prison break and then a race to find treasure. Again, this was a great idea for a scenario. I felt the artwork wasn’t quite as good as the other scenarios, but the puzzles worked much better than those in “The Nautilus Traps”. The biggest issues we found in this scenario were a couple of items that seemed broken (i.e. the numbers were added together, but then produced an illogical card in response) and the sheer quantity of puzzles to be solved in the time limit. We managed it, escaping from prison and then racing around the island solving puzzles, but only by going 10 minutes over the allowed time. We didn’t suffer many time penalties and were generally solving puzzles quite quickly – far faster than we had in the other scenarios – but there was no way we could get it done under the hour. 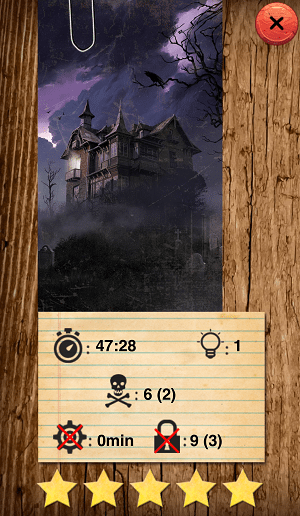 Overall, I enjoyed Unlock! Mystery Adventures. It isn’t so much a board game as an interactive escape room experience that you can enjoy at home, possible to play with a group of any size or even solo. I’m not generally a fan of games that require apps to drive them, but in this case the Unlock! app works well and allows the team to experiment with some very creative puzzles, most of which are high quality and rewarding to solve. The artwork is consistently good across all three games and the atmosphere is very evocative. The time limits focus peoples’ minds and I found myself really getting into each adventure. Unfortunately, as is the nature of these games, they only have a very limited shelf-life.

Once played through, there are no alternative routes to discover or any other ways they can be replayed. The one play-through you get – even if you’re unsuccessful – is it. There are no card-destroying requirements or anything similar (seen in the Exit games, I understand) but once you know the answers to puzzles, it seems difficult to restart the game fairly. At least the app allows you to continue (for no score) beyond the time limit. For a £25 boxed set, some people might want to consider if this no-replay value is worth it, especially given the weaknesses of the second scenario, but it’s certainly cheaper than a real-life escape room experience if you have a group of friends over. The scenarios are also available to purchase separately.

Themes are very atmospheric, with superb artwork
Puzzles are very satisfying to solve
App allows for more dynamic and interesting puzzles
Second scenario is notably weaker than the others
Some card issues overlooked in design
No replay value

I haven’t tried any other escape room games, but I can’t imagine that too many would provide a better experience than Unlock, which makes some of the design issues with the second scenario so frustrating. The concept is good and the adventures are exciting to play through, with excellent artwork and an app that drives the games on while providing a lot of atmosphere. It’s easy to lose yourself in the worlds of each adventure, but it’s a shame that you’ll only ever experience them just the one time.