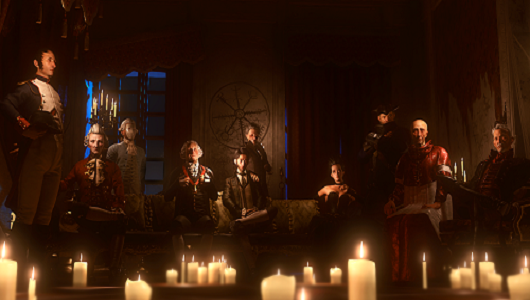 Review: The Council Episode One – The Mad Ones

Developed by indie new-comers Big Bad Wolf, The Council is dubbed as an episodic ‘narrative’ adventure game that is a pseudo-period piece, set in 1793 and features an alumni of famous faces including George Washington and Napoleon Bonaparte. The term narrative is used loosely in place of text adventure as the game varies wildly between on-rails, text-based navigation of dialogue and basic point-and-click adventure tropes.

Where Big Bad Wolf rise to the challenge of making an above average, mid-tier title, is in investing in uncanny graphics that want to be realistic and twisting the core mechanics of choice and dialogue, taking what could have been a text-heavy adventure and turning it on its head; making every conversation dynamic, involved and interactive. Every sentence has weight and every decision branching along a wide variable of stats, skills and upgrades.

Sadly, highly animated on-rails adventures like Telltale’s different stories have become the norm, such that when something along the lines of Life is Strange comes along, it feels like a breath of fresh air; despite being generally the same mechanics and game-play with a slightly darker and involved story. Then there are all the high school dating, bird-boyfriend, animal loving text heavy “simulations” on the other side of the fence that might also fill out the genre in question. 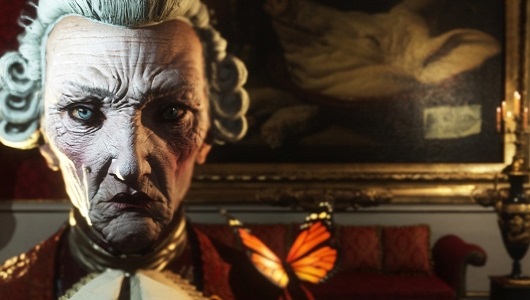 The Council and Episode One: The Mad Ones tries to do something different. Instead of health or specific ‘energy’ the main character Louis de Richet expunges stamina through conversation and loses it in points when making critical and time based decisions. The tale of Louis de Richet in 1793 France is loosely based around a number of plot points including a secret society, religion, politics and the search for Louis mysterious and slightly tyrannical mother, who may or may not have gone missing on a mysterious island run by a mad man and acting as the meeting point and melting pot of some of the world’s most influential ‘leaders’ including George Washing, Napoleon Bonaparte, A Catholic Priest and even Washingtons bipolar niece.

Big Bad Wolf have doubled down on dialogue mechanics and word play where all the aspects of the game feed back into each other. Many of the conversations involve normal dialogue wheels and branches, where depending on which skills you have (such as intimidation, or perception) different choices and outcomes are available. In other encounters it may be more focused on choices of people to talk to over another- leading to different cut scenes and completely missed opportunities.

To add layers to this Louis will suddenly find himself in ‘confrontations’ during dialogue which can involve timed responses or quick time observations to derive a characters weakness or stubbiness that you just won’t be able to breach. Logically, every character has a weakness that can be exploited (if you remember what it is), or a narrative hook that can be manipulated and likewise every character on the island has certain things that will fail your conversations and cost you critical stamina.

On top of this players can collect historical books and manuscripts that can be read at the start of each mission to essentially buff Louis in certain traits and suddenly it becomes a juggling act of managing three different skill sets as well as learning about each character, remembering their weaknesses and trying to read in-between the lines of everything they say! 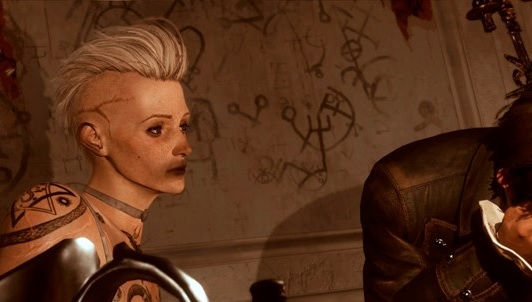 At its best Big Bad Wolf have crafted a game with The Council that excels at storytelling and writing. The way conversations are written are sly and each character you meet needs to be handled differently. No one speaks plainly and the leading language and double speak is not just for show- for the most part the writing is literally telling you things you may need to know later or deliberately leading Louis away from the point of the conversation and into misleading information.

The somewhat clichéd mysterious mansion on the rocky island is full of historically accurate paintings and actual works of fiction, where Louis can just wander, viewing the works of art and reading works like Dante’s Inferno. At times the subject matter of war, religion and politics in 18th Century Europe can seem a bit dry and yet to a particular audience is instantly more fascinating and engaging than fictional or fantastical or comical games.

During my time playing The Mad Ones, where the developers falter and show up their indie status is both in the graphics and the supporting ‘adventure’ nature of the game-play. The myriad of options for upgrading and distributing points of learning is also wholly unbalanced, whilst the game also seems to almost revel in showing the player every missed opportunity, failed conversation and untaken path. 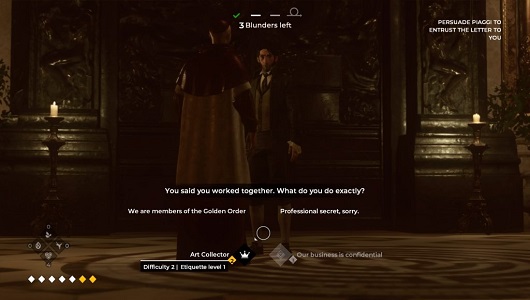 Giving the allusion of choice and multiple branches is one thing, but at the very start of the game having game-play options where you have to have 3 points invested in one stat is redundant, as there is no way you could know what was required and unless you solely invest your only 3 points into that one stat you are never going to get into that room (even if you do pick up the metal pole in true point and click style). This is a constant issue with The Council: Choose to stay with Washington and the game will laud the choice over you in that you didn’t get to meet X in Y room and as such have missed so many number of opportunities.

Given that XP is tallied at the end of each mission and skill points given thusly, it is almost impossible to know what encounters will be coming next to invest properly and if you choose wrongly or generally, then there is no way to play The Council without missing about ½ the content. The game will continue on regardless as well making the whole experience, despite the adventure aspects of it, seemingly still on rails if somewhat disguised in amongst the narrative.

Speaking of disguises the graphics are good to fair with some poor animation, especially in the faces and mouths and some average to poor voice acting. For a game made on-budget this is not surprising yet disappointing given the polish and depth of the rest of the game. Thankfully some of the lacklustre graphics are hidden behind highly stylised and exaggerated characters that border on the uncanny valley. 1793 border on something akin to Dishonoured with an almost classically dark and steam punk aesthetic including very buxom women and servants who wear masks (just because).

Other aspects of the game-play are reminiscent of the best parts of LA Noire, and even Life is Strange while Louis himself, running around an island picking up objects and random letters is such an homage to Lucas Arts Tale of Monkey Island it’s almost comical. For a game that wants to be realistic in its storytelling the voice acting sadly can take you out of the immersion, simply having a wholly American actor in no uncertain terms narrate who is supposed to be a French detective is jarring and 4th-wall breaking. 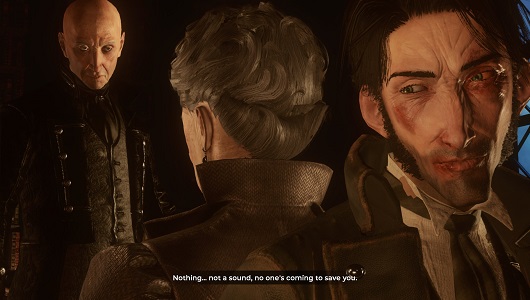 Borrows heavily from the best parts of other good games
Writing is on point, dense and interesting
Options to have varied outcomes and choices
The game will ultimately decide your outcome for you
Voice acting is jarring and not as polished as the rest of it
Adventure aspects are one massive step back in the face of progressive dialogue options

The Council is off to a good start with The Mad Ones, but it remains to be seen if Big Bad Wolf can keep the intrigue and dialogue consistent across 5 episodes at $10AU each. Hopefully other developers are paying attention and learning form what are surely to be new mechanics and narrative hooks for the often overlooked text and adventure genre of games. The Council is surprisingly deep but ultimately dry and despite the number of choices and different outcomes is not something that many people will want to replay. Choices don’t feel personal but the relationships do and whilst Louis is as interesting as a bed post his interactions and outcomes to manipulate everyone is enough to see what happens next.