Rad Rodgers is a self-proclaimed throwback to 90’s platformers, with all of the pros and cons that you’d expect from a game of that era, plus a few new ones courtesy of the updated technology.

Rad Rodgers is the tale of a young boy who is sucked inside his games console by a freak occurrence and then must use his finely honed gaming skills to save the fictional universe within. This is premise that is more or less as old as the concept of video games. Rad is a protagonist in the Bart Simpson mould, arguing with his mother about restricting his gaming time and using the word ‘Radical’ more than is strictly necessary. He partners up with his trusty games console Dusty, who has come to life as a gruff middle aged robot with a drinking problem. Their partnership is somewhere between Ratchet and Clank and Rick and Morty, although the humour never quite reaches the heights of either of those series.

There is comedy here, with plenty of one liners, snarky asides and 4th wall breaking jokes to punctuate the action. The first few times you hear the jokes they might elicit a chuckle and the intro cut-scene ended on a line that provoked a genuine moment of laughter, but the game insists on running its few good jokes into the ground by the end of the third level. Unfortunately the game seems to feel that having a child swear is the height of comedy and more or less gives up beyond that. There is the option to bleep the swearing which is arguably funnier than the alternative.

Various identical NPCs are hidden in secret areas to deliver more scripted phrases when discovered but the after a while those start to repeat as well. They are also unskippable, meaning the whole diatribe plays out once you’ve pressed the button to interact with them regardless if you leave the area or even end the level. 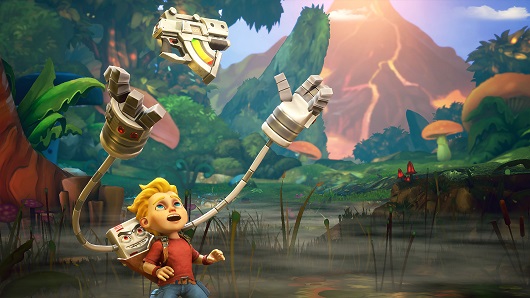 The levels themselves will be familiar to anyone who has played any 2D platformers from the Super Nintendo era forwards, for good and ill. They are brightly coloured, pleasantly cartoon-ish and just a little weird. In particular the backgrounds give the stages visual depth even if they don’t always match it mechanically. Updating the platform design with modern technology has allowed developer Slipgate Studios to craft surprisingly intricate worlds, and each level is at easily distinguishable at a glance from any other.

Moment to moment play follows familiar formulas too: you move (mostly) from left to right, collecting shiny objects and hunting for the special golden collectibles that will allow you to open the gate to the next level. Each stage also has secret areas the most well hidden of which provide you with different hats for Rod or weapon power ups.

The actual platforming is a little imprecise and slow which is fine for to begin with but as the difficulty ramps up it becomes more and more frustrating. After the third or fourth time you find yourself back at the bottom of a tricky platforming section it becomes a little difficult to summon the energy to climb back up again. 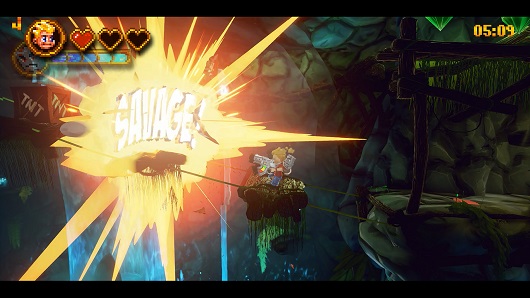 For all that the jokes lean too heavily on the game-within-a-game premise, it is used in interesting ways mechanically. Sometimes obstacles and level features have been ‘glitched’. To repair the damage you have to travel through stylised rifts in the game world, at which point you take command of Dusty. Floating through the pixelated mazes to find and return lost assets or rebuild broken ‘code’ though timed puzzles is welcome change of pace.

Although it makes a good first impression, Rad Rodgers suffers from diminishing returns. All the retro charm in the world doesn’t stop the jokes from wearing thin and the platforming from growing frustrating. It will evoke some nostalgia in fans of the genre but it is difficult to make a recommendation wholeheartedly. It’s radical…ish!