Lazer Ryderz is an easy game for an Eighties child like me to fall in love with. The Eighties-style VHS Boxset packaging is the first point of attraction, with each of the four characters packed into a different VHS style box. However the box is a good analogy for the game in general; fun, attractive but with a little bit more thought given to form than function.

The given description of a “Sci-fi maze racing game” means next to nothing but the creators may be limited by not wanting to get sued by describing it as a game of tabletop Tron bikes – but that is exactly what it is. Players take it in turns to lay pieces of the light trail left behind by their (definitely not)Tron bikes and these pieces connect together to form paths that must be avoided by other players.

Handily, the game can be played on any table surface with variations to the rules based on the size of the table you are playing on. It may still be better suited to some particular sizes and shapes but this gives the game a much needed bit of variety – as long as you have easy access to multiple tables. As well as avoiding the paths left behind by other players you need to avoid the edges of the table too. Hitting either will result in a crash that sees you removing your path from the table and restarting from your starting point. 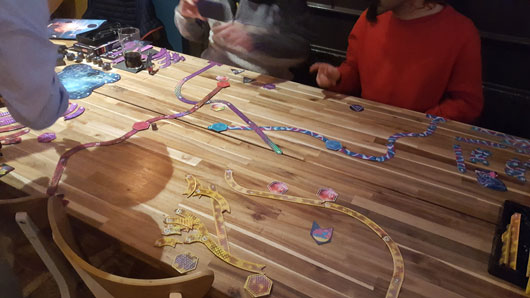 Players take it in turns laying the component parts of their paths. These path pieces will look familiar to anyone who has played Star Wars: X-Wing Miniatures with a mixture of straights and differently angled curves. Going straight is…straight forward, allowing players to lay a straight in whichever gear (from 1st–5th) they are currently in but corners have a push your luck element. While attempting to corner, a player must first roll a six-sided dice to determine if it will be successful by rolling a number higher than the gear they are currently in. This means that corning at higher speeds is more dangerous. Rolling a number that is lower is a negative result that means you have to lay a straight piece rather than a curve. Rather than a “6” this dice has a symbol which denotes spinning out – this slightly oddly still allows you to still place a curved track but then sees you reset down to 1st gear.

Gears are particularly significant as after each player has their turn, turn order is reassessed based on who is in the highest gear – with ties broken by the aptly named Tie-breaker marker. Determining player order can be a bit fiddly at first, as can working out the difference between spinning out and a crash – neither is immensely complicated by most people’s early games will be unnaturally broken up with periods of discussion and rules referencing – which seems especially jarring in a quick game based on speed. This is a fairly short lived issue but is likely to impact people’s early impressions of the game overall. 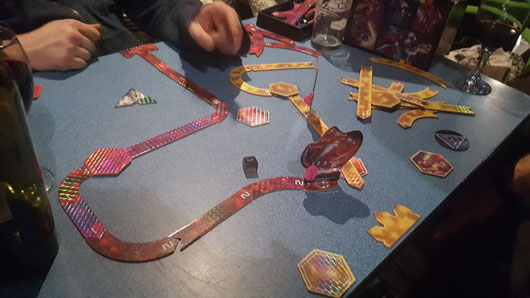 The winner is the first person to capture three prisms. These prisms start as neutral but change to a players colour when they entirely pass over them. As a player captures one they randomly re-add their neutral prism to the table by closing their eyes and lobbing it back onto the table. This means that there is always more neutral prisms appearing as well as previously captured prisms that can be overthrown by other players. While it might be difficult to reach the prisms with everyone’s paths criss-crossing the table, eventually more and more prisms are added and usually at least a few people will crash out and clear the way for you to race to victory.

Again. working out exactly what happens when a player captures (or does not quite successfully capture) a prism can be awkward to get your head around for the first few games but soon becomes less of an issue.

The games’ biggest limitation may well be a function of having begun its life as a Kickstarter game. Lazer Ryderz only has four characters in the box, meaning that while playing a four-player game all characters are in use and therefore there is no variety in characters and player powers from game to game when playing with four players – even one other character included in the game would have avoided this issue. Having identified this as a shortcoming of the game I could not help feel somewhat aggrieved by discovering that there were two extra characters made available as a Kickstarter reward. However this issue could be overcome by just varying a characters special power.

The box looks great but does not do a great job of its primary function of keeping all the pieces safely contained. The clear plastic stands in particular regularly fall completely out of the box, resulting in a contact lens style treasure hunt that does not add to the appeal of the game. Purist game collectors will also lament the irregular size and shape when trying to fit the box into their collection.

There are also a few factors, such as how the initial player order is decided – which sees players secretly holding up fingers to denote which gear they are starting in – which seem ill-conceived in conjunction with the final components of the game – given that each player has a character that has a slider denoting the gear they are in. There are also a few occurrences of circumstances that come up that are not adequately covered in the rulebook. This tends to result in players resorting to modifying a number of the rules with some house variations that generally seem more logical. I saw lots of groups playing and no two groups played the game exactly the same.

Strong theme and box art design
Fun, quick gameplay
Fan service for 80’s children and Tron bikes
Base game lacking in character variation
Early games broken up by rules referencing
Box looks good but is not great at being a box

I love Lazer Ryderz in spite of its flaws and it is out of this love that the criticisms may seem harsh or plentiful. It is certainly an imperfect game but one that fans of Tron and/or the 1980’s will likely rapidly find enough to gain quick bursts of neon-coloured enjoyment from.