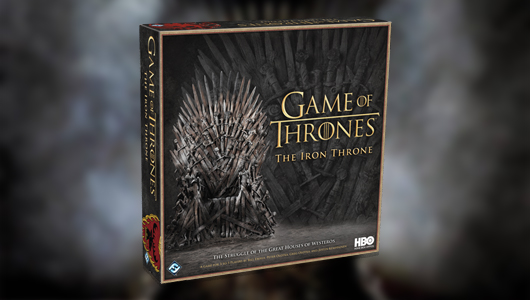 Hold your dragons, there is another Game of Thrones-themed board game!

That’s right, meet Game of Thrones: The Iron Throne, a game of influence and betrayal from creators of Cosmic Encounters. Your beloved or hated characters are here (although, Jon Snow is mysteriously missing) to scheme, plot and fight with one another once again.

In The Iron Throne, players will begin by choosing one of the five available Westerosi Houses: Stark, Baratheon, Lannister, Targaryen, and Tyrell. It personally saddens me that House Martell is once again missing from the group and, in the game based on the HBO’s TV series, I blame that omission solely on their underrepresentation in the show. Each House comes with five characters, each with their unique ability. When playing the game for the first time, and, possibly, even for the second, it is hard to get a bearing on a significance of the ability types and their effect on the overall gameplay. Five different Houses with five abilities each, simple maths tells us, results in 25 abilities to remember and assess, a task that is, frankly, overwhelming for any new player and gives an advantage to someone who is more familiar with the game. Therefore, the backup strategy kicks in: stick with someone you like from the show. While character powers are definitely helpful, they are not win-or-loose important but give more of a strategic edge. 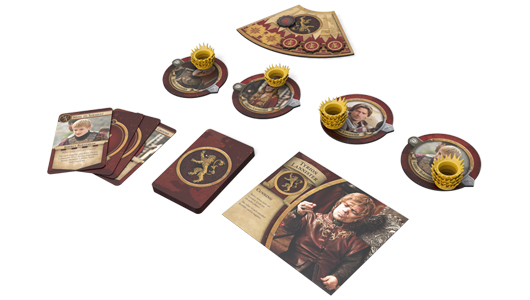 The objective of the game is to spread the influence from your House card to other players’ House Cards. The main way to do that is by winning the encounters. Typically, an event card will determine which House the active player is attacking. They will nominate a character to attack, while their opponent will likewise defend. The might of the character is represented by the power, crown shaped tokens stacked on top the character. Each player could also play a card, in secret, that will bolster the attack. The bigger number – a combination of power and card value – wins the encounter.

However, more excitingly, other players can also participate in the encounter by supporting either side with their characters and power tokens. This is where the spirit of Game of Thrones comes in. There are no permanent alliances, a player that supported you last round, could turn on you because it would be more beneficial for them. However, that does not prevent holding grudges from previous rounds and supporting someone because at this point in time you like them more is a completely legitimate strategy. 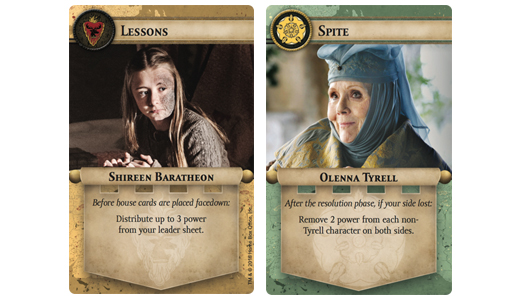 The two main players who are involved in the confrontation could also decide on a truce, and exact parameters of this negation would be completely up to the players and could exclude the supporting players all together. Yet, this would not be a Game of Thrones game without a little bit (or maybe a lot!) of betrayal: even if players agreed on a truce, one player, through a bit of backstaberry, could play a hostility card, immediately winning the encounter. No player is obliged to follow up on their initial promise which adds tension to the combat phase of the game.

Having said that, the negotiation part of the combat also requires a certain level of role-playing from the players. I have played with many groups of people who were just too shy to negotiate, defaulting to attacking straight away, not because they wanted to be aggressive but because they did not want to lie (even if playfully) to other people around the table. While, there is nothing in the rules of the game that specifically instructs to play one way or another, one of the most interesting parts of The Iron Throne, and the part that is most directly linked to the spirit of the show, depends completely on the player participation and enthusiasm. As soon as you get a group where players just like a straightforward play and do not enjoy the bluffing and skullduggery of it, the combat becomes somewhat formulaic and repetitive.

Although, only one person can occupy the Iron Throne is the Game of Thrones universe, in this game, there can be multiple winners. For example, if players, both with one influence token left, decided to make a truce, and as part of that agreement spread their remaining tokens to each other, both of them would win. Or, another scenario, which is less likely but still possible: four players with one influence token left, fight against the remaining player, win, pass their tokens to the losing player and – voila! – we have four winners. 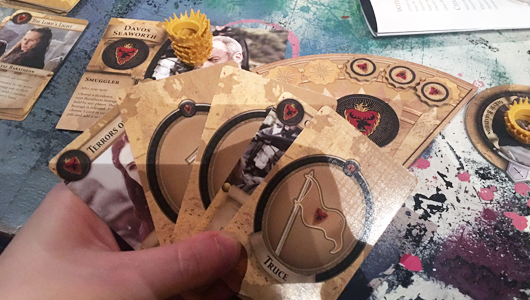 Those who played Cosmic Encounters, an extremely well-liked and critically approved game, will see its DNA in The Iron Throne. Moving influence tokens is akin to moving spaceships, both games have support players, asymmetric character abilities and even some components have a familiar feel. However, Cosmic Encounter is also undeniable a superior game. Anyone who has played it before will find The Iron Throne lacking. However, it is also true that there are more fans of Game of Thrones than of Cosmic Encounter, even if we subtract the overlap. The fans of the franchise will find a lot to like in The Iron Throne. Its mechanics are more streamlined and approachable, overall better suited for a more casual board gaming audience. It has beautiful stills from the show of their favourite characters. Finally, the feel of the game fits well within the atmosphere that we have come to expect of Game of Thrones: nothing is certain, everyone is in danger, anyone can betray you.

However, those who played a lot of Game of Thrones games, particularly those based on the show, might also find the overall look of the game unexciting. In general, all of the games seem to use the same or at least every similar screen stills of the characters of Ed-with-the-head and Cercei-with-long-blond-wig era. The image of the Iron Throne on the box art is also overly familiar, almost stealing the identity from the game itself. Finally, the only uniquely original part of the game, its crown shape power tokens, are impractical. They are supposed to stack on top of each other, which makes them really hard to count. Of course, the other option is to spread them on the cards, but then there is a danger of running out of space or covering the text. 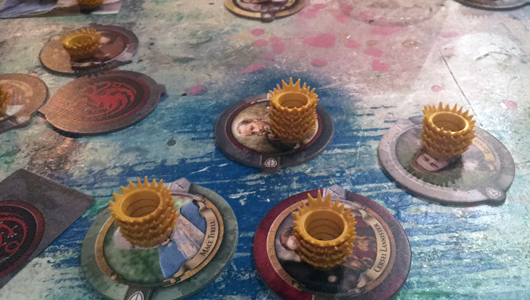 There is also a distinct lack of much-needed player help sheets. The effects of winning the encounter are very different for attacker, defender, supporters and truce outcomes. Furthermore, the game has a hostage mechanic and the related actions also vary significantly depending on the type of hostage card. Having to refer to the rule book constantly to look up the minute details puts the game on pause and breaks its flow, and could have been easily avoided with simple separate condensed guides.

Game of Thrones: The Iron Throne borrows some great ideas from Cosmic Encounters, puts its own spin on it, and mostly succeeds in doing so. Its biggest let down is the lack of investment in its gaming components. Game of Thrones success made some imagery so familiar that, in this case, they work against the game, making it disappear in other miscellaneous similar looking products. On the other hand, the strongest part of the game is to encourage conversations and interactions between players, and with a like-minded group of people, Game of Thrones: The Iron Throne can be a really special game.