Bloodborne: The Card Game shares a setting with the popular grimdark multiplayer video game, with its vampiric themes and frustratingly difficult gameplay. Does the gameplay justify the purchase, or is this just another branded cash grab? Eric M. Lang has created a dungeon game along the lines of Cutthroat Caverns, or Dungeon Raiders, but more streamlined and faster paced. I won’t call it a “crawl,” because Bloodborne: The Card Game is quick, engaging, strategic, easy to pick up and just plain fun for Bloodborne fans and novices alike.

Bloodborne has the framing of a co-operative game: players collaborate to overcome a Chalice Dungeon, slaying a variety of monsters and mini-bosses, and culminating in a showdown with the dungeon’s final boss, whose influence pervades the dungeon through special rules. Each encounter is different; some creatures can take a beating before going down, others deal dangerous amounts of damage, and some have special abilities that change the mechanics of the fight. Ordinary creatures fight for one round, then flee if not killed, whereas bosses fight until slain. To fight these monsters, each player is given a hand of basic cards, representing weapons, spells, and actions they can take. These can be augmented by buying upgrade cards from a common pool of five available choices, adding a mild deck-building theme to the game.

Gameplay consists of successive combat rounds. Each player chooses one card from their hand to play, all revealing their choices simultaneously. Cards are then resolved from the first player clockwise, though some ranged weapons preempt the turn order and attack first. Each damage done to a monster brings it closer to death but also yields blood echoes for the character landing the blow. Cards, once used, are put into a discard pile, so as you spend your attacks, your options become increasingly limited. In order rest and recover, hunters must go into the Hunter’s Dream. In the dream, a character takes half damage, refreshes their spent cards, restores full health, takes an upgrade card, and “banks” the blood earned hacking and slashing. 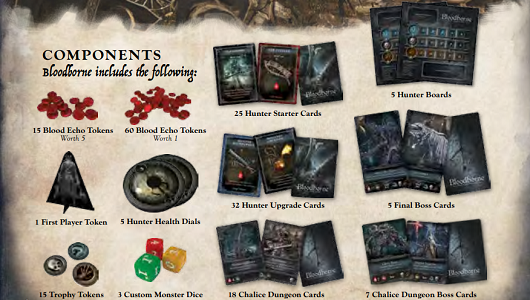 Monsters attack every character equally each round. More dangerous monsters roll higher damage dice, but even weak monsters can deal substantial damage via a stacking re-roll mechanic. Characters die if they reach zero health, and cannot then participate in the current round. While death is less pleasant than the Hunter’s Dream, it serves much the same function, allowing characters to restore their health and buy an upgrade, though any unbanked blood is discarded, and spent cards are not restored. But death be not proud in Bloodborne; a respawn is just a short sleep past, and your nigh-immortal vampiric hunter will be back in action next round.

Despite the grimdark theme and collaborative multiplayer framework, Bloodborne is not really a game of greyscale antiheroes overcoming eldritch horrors against the odds. The players will always “win” against the final boss, and there is no genuine cooperative element – the true game is played against the other players. The winner is not the one who did the most damage or slew the most monsters, but the one most devious at hoarding blood echoes and living to bank them. Upgrade cards improve your own damage and survivability, but also provide ways to kill monsters before your ostensible friends, or even get other players killed before they can land a blow.  Only players who deal damage in the last round of a fight get valuable trophies, so you want to make sure you get the final word and block others from doing the same.

What struck me more than anything while playing Bloodborne was just how much fun it is. Planning your tactics is engaging, getting inside the heads of the other players to beat them to blood echoes, or to get them killed. The limited number of cards makes the informational game more manageable. There are only so many moves your opponents can make, allowing for clever bluffing and counterplay. The game is also fast-paced. Bloodborne joins an exceptional few games in elegantly eliminating off-turn boredom by using simultaneous play. Almost all your time is spent doing interesting things, and while the Hunter’s Dream can get a bit tedious, the rest of the game flows like freshly spilled blood. 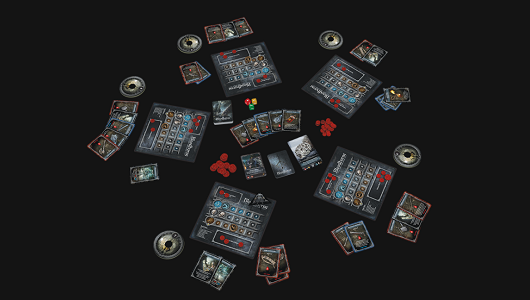 The art is of decent quality, though unrelentingly grim and grey. The instructions are generally easy to follow, provide a clear guide to the sequence of play, and answer the relevant questions. The production values generally good, though the punch out sheets were poor quality, resulting in tearing on some of the tokens.

Bloodborne isn’t without weaknesses. The gameplay gets repetitive after a few games, given the limited options available in the cards. Randomised final bosses and encounters create variety, but not enough to sustain interest. One final boss does nothing but prolongs the game, which has limited strategic relevance but makes the game drag on. Bloodborne is a better choice for a quick game to be played with occasional groups or new people than a deep strategy game you come back to dozens of times.

Overall, Bloodborne: The Card Game is a hit. It provides quick, tactical gameplay, and a strong match between theme and mechanics. One need not be a fan of the original video game to get a great time out of it – I’d never played the game, and found it compelling. I feel most gamers could pick this up for their collection without a second thought, but it would be especially good value for fans of bluffing and mind games, players who want lightweight but tactical games, and anyone who must re-teach games frequently to new groups.