The promise of virtual reality has always been the idea of presence; the feeling of wholly being in another world. While the most basic implementation of this is placing you somewhere in a sensory way (what you can see, touch etc.), virtual reality also allows you to be placed somewhere in an ideological way too.

Being an outsider looking in, the United States of America and its love of guns has always fascinated me. The right to own a firearm is literally written into their constitution. While I can never understand this love myself, through The American Dream’s satirical eye, I do wonder if it could be used as a tool to illustrate the absurdity many see in gun culture.

If you are not aware of The American Dream, it is a VR title created by Samurai Punk that ‘celebrates’ the firearm culture. The setting reminded me immediately of the pre-nuclear holocaust of Fallout; a 1950s vision of America that you only see in adverts. The entire ride is a construct of the American Rifle Association, a clear riff on the altogether too real National Rifle Association. Its purpose is to show you its idea of an idyllic future – one where the gun forms the center of American society.

In video game terms, this translates to a theme park ride crossed with a shooting gallery. The game requires two Move controllers and primarily, they function as pistols. However, when it’s time to use a larger gun, like a bolt-action rifle or shotgun, your dominant hand is used to hold this, while your other controller is weirdly transformed into a Luger with a mechanical hand attached to it. The small gun-hand is then able to grip the stock of your larger gun, grab and insert clips as well as pull back the bolt on your rifle. 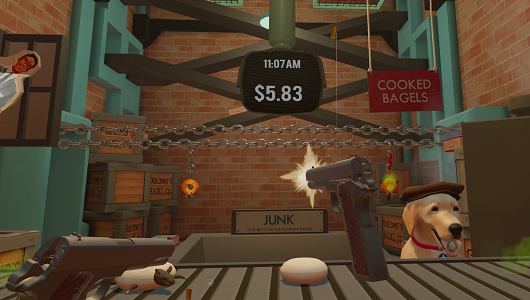 The gun handling is actually quite fun too. As both of your hands have pistols a lot of the time, reloading involves you dropping the empty magazine using the main Move button and hitting an in-game button on the side of your ride cart. This launches a new magazine into the air and slows down the game world enough so that you can catch it using your pistol. This soon becomes stressful however when time-sensitive challenges ask you to reload in the middle of a task and you scramble in slow-motion to reload.

You are guided through each area by a friendly, talking Labrador named Buddy Washington, with a voice like Westbrook Van Voorhis. He introduces each new area, which take the form of snippets of life from childhood to middle age. Each level puts you in a familiar scenario (cleaning your room, going on your first date etc.) and creates challenges for you to complete that must be achieved using guns. Need to pick up items strewn across your room before your mother arrives? Shoot them. Need to flip burgers as part of your first job? Shoot them too. You get the idea. 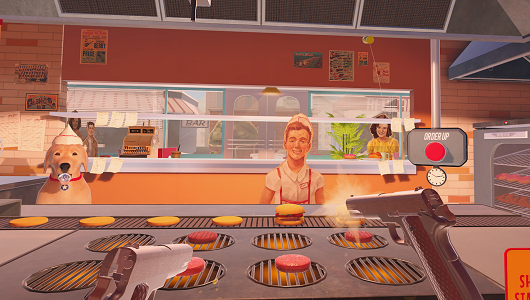 Throughout the game, each new task is tied together with cutting satire and humour. At the end of my first date, Buddy remarked that I clearly enjoyed my time with my date based on the fact that I now had a concealed carry in my pocket. He also repeatedly spat any time he mentioned the word ‘communist.’ Game-play tasks are also laced with humour. At one stage in the game, you are asked to use your rifle to collect cotton candy on its tip and then eat it. Guns are used for every menial task you can think of, but when you decide to shoot at human characters or the dog, the voice-over laughs it off.

As I played The American Dream, I got a little distracted by some technical issues. These ranged from some weird aiming bugs when using the Move controllers, some level-scripting issues as well as audio clipping at some points. Overall though, it performed quite well. 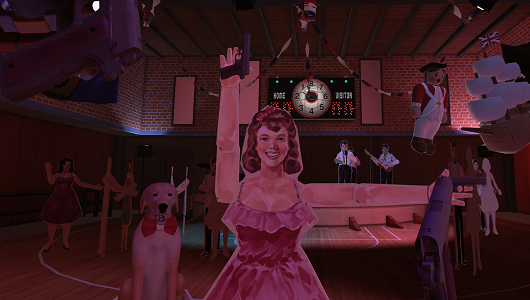 Modern-day America looks frightening to an outsider like me and while I don’t believe The American Dream will change many minds, I do like its use as a satirical look at gun culture in general. Outside of any political messaging, it also plays reasonably well and is a fun way to spend a few hours. While the joke manages to stay fresh throughout much of the game’s play-time, I do think it could have used some editing, especially during some of the longer level transitions. While there are plenty of shooting gallery games for PlayStation VR already, at least you can laugh maniacally at this one! 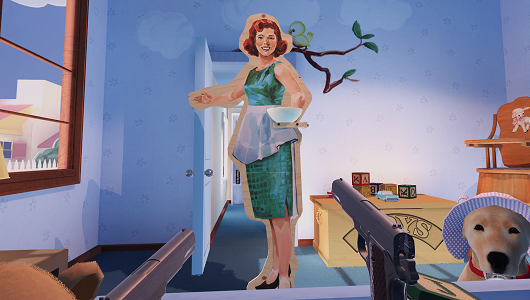